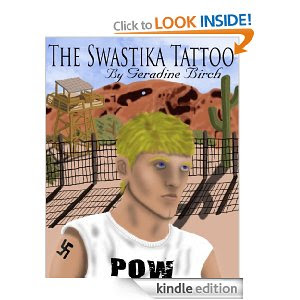 What is your name, where were you born and where do you live now?
I’m Geraldine Birch. I was born in Panama City, Panama. I have lived in northern Arizona for 20 years.

Did you always want to be a writer?
Yes, I always wanted to be a writer, beginning at about the age of ten. During summer vacations, I would sit in the kitchen nook of my grandmother’s house in Los Angeles and pound out stories on my mother’s old Remington typewriter.

When did you first consider yourself a “writer?”
When I was ten, I considered myself a writer. Looking back all these years later at the stories I wrote, I’m amazed at their structure and how well they hold together.

What is the name of your latest book, and if you had to summarize it in less than 20 words what would you say?
My latest novel is The Swastika Tattoo. It’s a story of intolerance taught to a young German by the Hitler Youth and about his change in attitude.

How long does it usually take you to write a book, from the original idea to finishing writing it?
I have written two novels. The first, Sedona: City of Refugees, took six months to write and another six months to self-publish. With The Swastika Tattoo, from the actual idea of the book until its published date, it has taken about ten years.

Which of your books were easier/harder to write than the others?
My first novel was easy to write. It is fairly autobiographical—the story of an older newspaper reporter who writes profiles for a newspaper in the beautiful city of Sedona, Arizona. It’s about her view of the varied people who inhabit Sedona—tourists, Jeep tour guides, New Agers, Christians, Realtors, senior citizens, and the business people of the community. My new book was much harder to write. Although I have been interested in WWII history for many years, The Swastika Tattoo took many, many hours of research. In order to be thoroughly accurate, my husband and I travelled to Germany where I spent a week at the U-boat Archive in Cuxhaven, Germany. I also interviewed a former U-boat officer who was also a prisoner of war during WWII.

What can we expect from you in the future? More books of the same genre? Books of a different genre?
Currently, I am writing a memoir and I hope to have it finished by the end of 2013. After that, I will write the second volume of The Swastika Tattoo which will take my main character, Rudolf Meier, back to a destroyed Germany after he is repatriated from the Arizona prison camp at the end of WWII. It will follow his life there, the life of his children and grandchildren.

How long have you been writing? Who or what inspired you to write?
I have been writing almost 60 years. I really don’t know who inspired me to write because no one in my family leaned toward the literary arts. Although they were creative in their way—they were professional dancers—no one read books or talked about literary things. I have to give my mother credit for taking me to the public library every week so I could borrow the limit of ten books. I lived a happy little life in the books that I read and I suppose that is what inspired me to try my hand at it when I was ten years old.

Where do you get your book plot ideas from? Who is your inspiration?
The plot of my first book, Sedona: City of Refugees came to me because I was a newspaper reporter in Sedona and I realized how the mix of people who visited and lived in the tourist community made it such a unique place. It was a story I had to write. As for The Swastika Tattoo, the story came to me while I was doing research for another book idea at the main library in downtown Phoenix, Arizona. I came across information that there had been a large German prisoner of war camp on the outskirts of Phoenix during WW II. I was fascinated and then ultimately found there had been more than 500 POW camps in the United States, housing more than 370,000 German soldiers and sailors. These men were brought to the United States to work in cotton fields, pick citrus, clean irrigation ditches, work in factories, and harvest lumber—all of the jobs that suffered from American men being drafted into the war effort. Most American’s today don’t realize we had POW camps in our midst! I guess you could say my inspiration comes from being open to the world and knowing from my journalistic training what makes a good story.

Do you have anybody read your books and give you reviews before you officially release them?
My books are read by a wonderful group of women who belong to a writers’ workshop in Sedona. The group is led by a 90-year-old writer, Willma Gore, a lady who has written and published all of her life. She has been an incredible inspiration, urging me to keep writing, which is very important because the writing life is so isolated.

How do you come up with the Title and Cover Designs for your book/books? Who designed the Cover of your books?
For Sedona: City of Refugees, the title of the book was the result of a conversation with a dear friend. We were gossiping about the various kinds of people who are drawn to Sedona, and he said to me, “Sedona is a city of refugees. Everyone comes here because they are trying to escape their past.” That really struck me and I immediately knew the title of my book. As for The Swastika Tattoo, it’s a story about a young man enthralled with Nazi Germany. The swastika is an important symbol to him and because he has that symbol tattooed on his forearm, it just seemed to make a point. The cover design for the first book is a glorious photograph that I took of Sedona one winter day when snow lightly touched the red rocks. The cover for The Swastika Tattoo was designed by a wonderfully creative artist, Nadine Vida, an artist who lives in Phoenix. I told her I wanted the backdrop of the POW camp with its strange geologic forms and a young man who looked really unhappy about being trapped being a wire fence with guard towers. She really brought forth all that I had hoped for the cover.

Do you decide on character traits (i.e. shy, quiet, tomboy girl) before writing the whole book or as you go along?
I let the book flow out of my own experiences. In my mind, I sort of know what kind of characters I want, but they don’t get fleshed out until I actually begin to sit down and get to know them through hours of writing and editing.

Do you basic plot/plan your book before you actually begin writing it out? Or do you let the writing flow and see where it takes the story?
I don’t plot my books. I know where I want to go before I begin, but if the book takes a different angle, then I let that happen and see if I like it. In most instances, I do. Frankly, I have no idea where some of my ideas come from, but I happily accept most of them.

How do you market/promote your books?
I promote my books through my two blogs which have the same name as my novels. I also use social media.

What do you do to unwind and relax? Do you have a hobby?
Mediation is what begins my day before I sit down to write. I find the process of mindful mediation clears my head and allows for ideas to flow in. I also love to read, garden, travel and cook.

Have you ever based characters on people you know or based events on things that have happened to you?
Most of the characters in my book are a mix of people I know or have known in my life. While my first book touched a great deal on my life, parts of it were mere fantasy. The second novel’s characters came through extensive research about the German people during Hitler’s reign.

Are their hidden messages or morals contained in your books?
Yes, there are hidden messages in both of my novels. In the first, I write about people’s belief systems. With some scrutiny, a reader could discern a lot of my personal skepticism about organized religion. In the second book, the story is about prejudice and intolerance and how those traits are built into everyone from a very young age and how very difficult it is to change.

Is there a certain Author that influenced you in writing?
Many authors have influenced me: Tolstoy for the depth of his books, Ivan Doig for his beautiful language skills, Ann Patchett for her ability to pull the reader into her stories and make us sweat until the very end, and Hemingway for his brevity. I admire all of them and hope one day I can come close to their abilities.

Which format of book do you prefer, eBook, hardback, or paperback?
I prefer a hardback book. I love the feel of it and if I have been lucky enough to buy a first edition, I take the cover off to preserve it while I am reading the book. Unfortunately, when one is self-published, the cost of hardback and paperback are prohibitive, thus I have to publish eBooks.

What is your favorite book and why?
My favorite book is Ivan Doig’s Dancing at the Rascal Fair. It’s a heartbreaking story, but the language is superb. I would give my eye teeth to write like that.

Do you think eBooks will ever totally replace printed books?
I really hope eBooks never replace the printed book. I love my books and I love being surrounded by my books in my office. They mean a great deal to me because they are dear friends—I’ve lived through the travails and triumphs of the characters. They are dear friends. Although I appreciate that the publishing revolution of eBooks has allowed me to publish my work, and I do read extensively on my Kindle, I miss the touch of a book.

What piece of advice would you give to a new writer?
Writing is a hard business. Anyone who sits alone in a room and makes up characters should understand that few people make a real living from writing. That’s why one must write to bring satisfaction to oneself. If you hit the big time, well that’s great! But if you do not, just know that you have gone into your inner self and survived the knowledge you have gained from doing that.

Thank-you for taking the time to take part in my Interview!