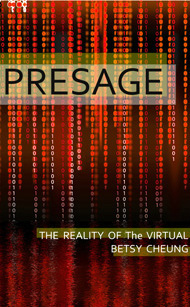 BLURB from Goodreads
The year is 2018 – A controversial new class system is enforced to gear people up to do community work to replace welfare that the government can no longer afford. Hugh van Santen is the editor in chief of a major newspaper which relies on scoops to stay afloat. He recruits Sophie Chantal, a cub-journalist knowing her brother-in-law, a computer scientist, can create amazingly accurate simulations of people he calls mindroids – Sophie’s first assignment is to write a feature on the bicentennial birthday of Karl Marx and she asks Sam to simulate notorious historical personas who one after another causes mayhem and near-riots. Meanwhile the CIA is after Sam’s simulation technology who designs a game of clairvoyance called ‘Presage’ where people can retrieve parcels of his simulation program. Warfare is instigated between Sam’s gamers and the intelligence agents who initiate Operation Hercules in a race for Sam’s secret in the reality of the virtual.

What is your name, where were you born and where do you live now?
My name is Betsy Cheung , I was born in Hong Kong and that’s where I now live, but my parents were afraid of Communist China taking over Hong Kong sooner or later, so they took us to Holland where I grew up, and studied in Edinburgh, Scotland .

Did you always want to be a writer? If not what did you want to be?
I have always been good at writing, wrote stories and kept a diary, but when I was little I wanted to be a doctor. I only started thinking about writing when I was an architect, and a colleague of mine read a design ‘write up’ I wrote and said that if I penned that, I should be a writer and not doing architecture.

When did you first consider yourself as a "writer"?
When I finished my first novel, I considered myself a writer, that’s nearly three years ago. I was given a book by my friend, ‘Kingdom Come’ by JG Ballard, and it was about consumerism hypnotizing people and turning them into an angry vandalizing mob. The story took place around a Mall in an English small town. My job was a retail architect at the time. Obviously it started me to think about being part of this whole money making machinery and inspired me to write my first book.

Did it take a long time to get your first book published?
Two three years almost. A small indie publisher took it on, but it was going so slow, and I had to do almost everything myself anyway, and the terms were tough, so with all the e-books taking off so well, I thought I should be brave and try self publishing.

Do you work another job as well as your writing work?
I worked as a design architect for nearly two decades, but I am an assistant professor in architecture at a college called Chuhai which will soon be renamed as university, because we just got credidated this summer! Otherwise, I do some part-time product design and copywriting for a friend.

What is the name of your latest book, and if you had to summarize it in less than 20 words what would you say?
My latest book is a dystopian novel called ‘The Reality of The Virtual’/Presage’: It’s about a young journalist involved in a media scoop which nearly brings her newspaper down, while around her riots against a new class system escalate in the year 2018.

Who is your publisher? or do you self publish?
I set up a small publications firm called Pebbles Publications and I intend to do two to three titles a year of  including other authors. That’s the long term plan.

Do you have a "lucky charm" or "lucky routine" you follow when waiting for your book to be accepted by a publisher?
I think the best approach is to know who your target audience is, and write the best book you possibly can with them in mind, and building a platform where you can get exposure and reach your audience and they can find you is very important. If you work on that while you are writing your book, the publishers will appreciated that, but then, it’s hard to say because the risks that they take with new authors is large and often they won’t take it at all.

How long does it usually take you to write a book, from the original idea to finishing writing it?
The first time it took a year, the second time I am much faster and have 70-80 % of it done in 3 months. The thing is that it really depends on how deep you want to go, how much research you want to do and how detailed you want it all to be. For my books, I have an urge to go on a quest to find out more, and to discover something that I think is the crunch of some entanglement of issues. I read tons of books as research for each novel and each time one of my characters, sometimes antagonist, sometimes protagonists will take a stance. I like to explore new hypothesis.

Which of your books were easier/harder to write than the others?
Quite predictably the one I’m writing right now. It’s called ‘Confessions of a Deviled Woman’ if only because I’m actually tied up in so many sub-plots right now. It’s a novel written as a memoir of a woman living in Hong Kong, and society  has put a stamp/stigma on her as insane dissident whenever she steps ‘out of bounds’.   The underlying theme is about the dilemmas of socialization in a disagreeable society.

What can we expect from you in the future?  ie More books of the same genre? Books of a different genre?
I like to explore new things, I think people are at their most creative when there are different areas of their life and what they know that cross-fertilize each other, but ultimately, you are what you are and even a writer of fiction has bearings he or she can’t make go away. The most interesting thing about being a writer is when a book take you to unknown meadows and you find yourself in a different camp afterwards. I guess that is probably true about reading a book too, but the process of writing such a book is what I find additive.

Do you have a favorite character from your books? and why are they your favourite?
A few of the characters in my books are based on people I idolize in real life, like slavoj zizek and Maya Angelou, in my book I made them into a grandmother, or a crazy mentor, but the characters I like most are ones who are passionate, sensitive types and a bit of the underdog type.

Do you gift books to readers to do reviews?
Yes, I will like to give away two paperbacks of my latest book ‘The Reality of The Virtual’

What do you think makes a book a really good/bestseller ?
It has to be a page-turner, entertaining and have an underlying message people want to learn about or feel strong about already.

Have you ever suffered from a "writer's block"? What did you do to get past the "block"?
No, there was a time that I thought I had a lot to learn about fiction and writing novels. I had to learn the craft and be critical, but I never had a writer’s block.

Do you think books transfer to movies well? Which is your favourite /worst book to movie transfer?
Harry Potter was fairly good actually with spectacular special effects that by far exceed what I visualized when I read the books.  I gather how these two relate – the visualization of the movie, and the reader’s own visualization when reading-- has much to do with how the reader will like the movie after reading. If it’s a love story for instance, and the actor in the leading role is not my type, than the movie is already ruined for me. It’s quite personal sometimes, but usually, the director and the author are two different artists whose interpretations of a story inevitably differ. Sometimes it’s the director who is the better artist, although the author is the original creator, but they both bring something to the project and if it’s compatible and reinforce each other, it can be great. I wouldn’t like to say that a movie is not good because it’s not authentic to the book, sometimes it makes it better. One thing that’s for sure is that the timeline is much shorter and in those terms more challenging!

What are you currently reading? Are you enjoying it? What format is it? (E-book, hardback or paperback)
My editor told me my book ‘The Reality of The Virtual’ is like ‘Snow Crash’ by Neal Stephenson, so I just finished reading that. It’s a paperback. For the first three chapters I suffered from information overload. Stephenson has a masterful way of cramping a lot details in his book, in this case all very fantastical facts about this technocratic futuristic world. I can see why my editor said what she said, but I think my novel is very much a book of its time, which is current and focused on the struggle against problems and challenges people face today like suppressive governments, manipulative media corporations, terrorism and national security, and the difficulty of being faithful to one’s believes and hang on to one’s souls.

Do you think e-books will ever totally replace printed books?
I love the books I have accumulated in my book cases over the decades. They are parts of my life, snippets of thoughts the writers shared with me and I would be very sad to go without them, but on the other hand these e-books are incredibly convenient. I like both actually for different reasons. I would hate to choose one over the other.

Do you think children at schools these days are encouraged enough to read? and/or do Imaginative writing?
Certain schools do have a hectic reading regime, which is great for kids because they can learn so much from reading and at the same time, to learn to appreciate book as entertainment is a gift for life.

Do you have a treasured book from your childhood? If yes, what is it?
Pipi Longstockings by Astrid Lindgren. I also love the TV series too. and thought it was cool to be able to lift up a horse single handed, do whatever you want when you wanted to do it, have a pirate for a dad, and wished I was Pipi for the longest time. Astrid understood her target audience!