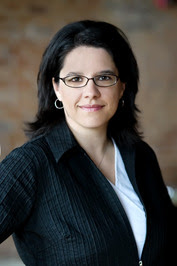 Aimee is a romantic at heart and a southern transplant with a bit of the accent (but not a whole bunch). She's married to her high school sweetheart, and with him, she's produced three native North Carolinians, two of whom share the same DNA.

With an MBA and a degree in Applied Mathematics, there's absolutely no reason she should be writing romance novels. Then again, she shouldn't need a calculator to add two numbers, either ... but she does.

What is your name, where were you born and where do you live now?
My name is Aimee Laine and while yes that's my pen name, every letter in my name is in my real name. :) I was born in Flint, Michigan and live in Apex, North Carolina!

Do you work another job as well as your writing work?
I do! I have 'a real job' as everyone likes to call it. In the 'real job' which pays the bills, I am a Program Manager for eLearning projects. Interestingly enough, I've also written eLearning courseware and been the editor for other courseware, so writing is a BIG part of my 'real job' life, too!

What is the name of your latest book, and if you had to summarise it in less than 20 words what would you say?
Surrender is my current book and my summary is this: Take a horrible past and live through it again. What would it take for you to go through it again?

How long does it usually take you to write a book, from the original idea to finishing writing it?
I'm a very quick writer. I can write 1500-2000 words in an hour. Surrender took a little longer than 'normal' because I rewrote a quarter of the story when I didn't like where it was going because I'd 'forced' the story instead of letting it tell itself. So generally 30-60 days from start to final 2nd draft.

What can we expect from you in the future?  ie More books of the same genre? Books of a different genre?
The third book of the Mimics of Rune is in progress, and the second book the Games of Zeus series is slated to come out in March 2013. My alter-ego Emi Gayle has a release of After Dark in October with the complete trilogy out by 2014, so you can see, lots coming!

What genre would you place your books into?
My books are paranormal romance which is the genre I most prefer.

Where do you get your book plot ideas from?What/Who is your inspiration?
Inspiration happens everywhere ... Surrender was a building inspiration while I wrote Little White Lies. But I've had sheds on the side of a road I've passed 1000x be a sudden inspiration for a book idea. Literally. That's how Silent Echoes came about.

Do you read all the reviews of your book/books?
Actually, yes. I do. Some say not to, but I learn a lot from my reviews. I learn what people like and don't and I learn to toughen my skin and not to have an ego. It humbles me and tortures me at the same time to read my reviews.

Would you ever ask a reviewer to change their review if it was not all positive about your book/books?
Never. We are all humans and we will never all like the same thing. I expect some will trash my book. I expect some will love it. Luckily, that's been a fair balance across the spectrum, so I'm very pleased in general.

Which format of book do you prefer, ebook,hardback, or paperback?
People tell me I'm crazy and they may be right, but I MUCH prefer ebooks.

Thank you Aimee for taking time out from your busy writing schedule to take part in this Interview for my Blog and it's followers!