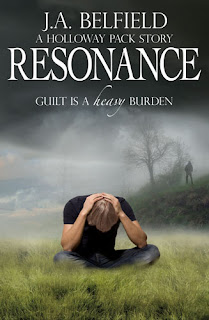 Guilt is a heavy burden for the one carrying it.

Jem Stonehouse is no exception to this rule.

For one, youngest pack member Josh Larsen wouldn’t be trapped in the sleep of the dead.

Now, Jem is convinced it’s her job to bring him back to life no matter what it takes— learning more about her heritage, risking pack exposure, or travelling to places she couldn’t have imagined possible.

Even if the journey endangers her soul.

MY REVIEW OF THE COVER
This is a series of books I read and love. So the byline says "Guilt is a heavy burden" it certainly is, and the phrase instantly attracts you to the book and makes you want to know more. Like who is guilty? Why are they guilty? Should they be guilty? I am as much in the dark as you guys as I have also yet to read the book prior to this one in the series. (Blue Moon released December 3rd) You see a shadowy unidentifiable figure lurking in the background. Are they watching the guy at the forefront of the cover? Who is the guy at the front of the cover and why does he look in such distress? This one will be a MUST for me as I love The Holloway Pack Series!

Other books by J.A. Belfield: