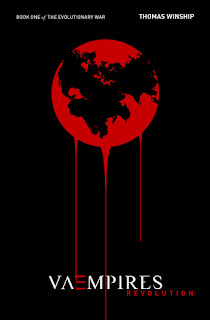 Daniel’s father would have the situation under control; he’d stop the killing. He was the captain of the guard. He trained for these situations. Hell, Daniel trained for these situations.
There was no answer for three seconds, four seconds, and a finger of fear formed in his stomach.
Five seconds.
Six seconds.
“Hello.” It was a whisper.
“Dad!”
“Daniel, where are you? Tell me you’re not in the city.”
“I am. I’m coming, Dad.”
“No! Don’t come here.” Someone screamed in the background. “There are only a handful of us left.”
“What! How is that possible? Every guard in the city was there.”
“They tricked us, Daniel.” His father’s words were pained. “We were so blind. The væmpires are not only stronger and faster than we realized, but some of them have powers, Daniel.”
“I know, Dad. Some of them can Read memories in our blood.”
“I’m not talking about Reading, Daniel, I’m talking about other powers.”
“Other powers! What do you mean—”
“Shut up and listen! I haven’t got much time.” His father’s whisper was like a shout in his ear. “Some of them teleported. One created a wall of flames. One killed with a touch of her bare hand. And some of them, some changed shapes—they looked like people we knew, other guards, dignitaries, and then they reverted to their true forms before our eyes and attacked.”
“How is that possible?” Daniel cried. “How is any of that possible?”
“How doesn’t matter, Daniel! What matters is that they are much more dangerous than we ever suspected. They killed King Brant, Queen Anne, the human president and the First Lady before we even realized we were under attack. It was a slaughter.”
The words reverberated in Daniel’s mind. The king and queen are dead. Cassie’s parents are dead.
“What about Mom? She’s okay, right?”
No answer.
Ohnoohnoohno.
“Dad!”
“She’s gone, Daniel. I couldn’t save her.”
“No!”
“Listen to me, Daniel! Get out of the city!”
“No. I’m coming to help. I can—”
“Flee, Daniel. Now!” An explosion made his ear ring. He heard rubble hitting the floor and then labored breathing.
“Dad!”
“Daniel.” His father’s voice was weak and thin. “Run. Once they know I’m dead, they’ll come for you. You’ll be the acting king.”
“Who cares about that?”
“The people do, Daniel.” The voice was so low it was almost imperceptible. “Vampires and humans just lost their leaders in one afternoon. The væmpires attacked at least a dozen major cities around the world, vampire and human cities. There’s no telling how many people will be killed before the world even realizes we’re at war, and there’s no telling how the humans will react to being attacked. You must bring this conflict to a peaceful conclusion before it’s too late.”
“Humans wouldn’t dare unleash atomics,” Daniel said, experiencing a wave of unease at the thought.
“There are no limits to what humans will dare,” his father whispered. “Never forget that. It’s their greatest strength and their deadliest weakness.”

Cassie was there, bloody and weary, with a look in her blue eyes that said she’d been to the depths of hell and fought her way back, but she was there and nothing else mattered.
The young lovers fell into each other’s arms and, for a brief time, were the only two people in the world. Words failed and thoughts escaped as they surrendered to the most basic of needs—the need to be held.
They broke apart, neither knowing how long they’d been that way, but both experiencing the same conflicting emotions.
Given the circumstances, it hadn’t been long enough.
Given the circumstances, it had been too long.
“Cassie,” Daniel sighed, “I thought I’d lost you.”
“You almost did,” she said, and what he saw in her eyes—fear, pain, and something else he couldn’t identify—was so intense, his heart broke, releasing the flood of tears that had been threatening to come.
“I don’t …,” he started, suddenly a teenager again, “I don’t know what I would’ve done if I had.”
And Cassie cried too, great big tears that pooled at the bottom of her blue eyes before flowing over her long lashes to run down her cheeks, the salty stream cutting a path through the blood and dirt coating her face. The sight of it was at once the most heart-stopping—and heart-wrenching—thing he’d ever seen.
He took her face in his hands, the tenderness in his touch feeling odd after all the death he’d dealt out that day, and kissed her, a long, lingering kiss that was unaffected by their crying or the taste of tears on their lips or the death littering the courtyard around them.
Eyes closed, Daniel breathed her in, this girl—no, this woman—who owned his heart. Her scent, as familiar as his own, was buried beneath a plethora of aromas. Many, including the stench of bloodsuckers, were unpleasant, but it still made his heart skip a beat.
When the kiss ended, he peered into her eyes and whispered, “Did I ever tell you that I’ve loved you since the first time I saw you?”
She smiled. “We’ve known each other since birth.”
“Okay,” he amended. “Since the first time I remember seeing you.”
“Then, yes,” she giggled, “you have told me on several occasions.”
Daniel realized that her giggle wasn’t incongruous with their current situation as much as it was in defiance of it. They were on borrowed time and they knew it.
“And have I told you that I’m going to love you forever?”
“You’ve done more than that,” she said.

If you just enjoyed what you have read and would like to read more then enter below using the Rafflecopter Form below.