What made you choose Angels to write about?


I was once a teenager who was completely upset with the world, and was trying to figure out something to believe in to get me through. My grandfather had passed away, I hated high school (as most teens can relate), and I began to ‘dream’ and think about angels. I couldn’t understand why - if there were any - they would come down here. I mean, it wouldn’t make any sense, seeing as that they had it all ‘up there.’ Later in life, I went back to thinking about them, and felt it was really time for Matt and Emily to ‘meet’ the world. In fact, the last decade has kind of been ‘waiting’ for the ‘winged ones’ to land, so to speak. But I really don’t want this confused with ‘religion.’ To me, angels aren’t a specific religion or belief - they are those friends and protectors who help us stand up when we fall down. To me, Emily and Matt are friends who are just trying to keep their faith in a world that’s trying to rip them apart…like the rest of us.

Where did you get the idea for this book from?
Oddly enough, from a dream, which sounds completely corny, but it’s true. When I was going through the ‘tough’ times at 13, Matt was actually a boy I saw who talked to me. In a library, of all things. He wanted to be free to see what ‘life’ was about down here, and I couldn’t understand him. But then, when I got older, I began to realize what he meant.  Living a life of perfection would be boring. If everything is perfect, you have nothing more to attain, discover, or yearn for… You fall and get hurt, but there’s always something around that next corner that could be the ‘magical moment’ of your entire life. Without imperfections, I think you would be really bored. And that’s what Matt taught me. 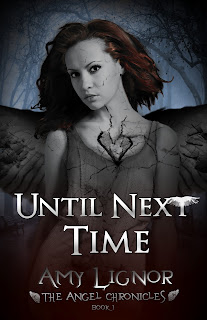 Do you believe in Angels among us on earth, similar to those in your book?
For me, yes. I know some people see angels with the wings and the halos, and the beauty that the word ‘angel’ calls forth. I think they’re a lot like my ‘favourite people;’ like my grandfather was. They stand beside you as a friend, behind you so that you can go out there and try your best at something, and in front of you for protection when you need it. I think they’re a very special ‘being’ that makes sure you’re never alone during the great times or the hideous ones that life happens to throw your way.

Do you believe that when we die we become Angels and have another life?
I believe we have a choice. I think there are people down here who are very “old souls.” You can see it in their eyes. They look at things differently; they’re the ones who get that ‘funny little smile’ on their face when a story is told that they couldn’t possibly have known about because they weren’t even alive then. New souls have that gleam in their eye when they look at something - everything is fresh and new, and they’re having a ball soaking it all in. An old soul has that gleam, but they also nod their heads like they’ve seen it all before, but they’re so happy to be seeing it again. It’s like they’re ‘back’ for another life and they have no regrets.

I believe you have the choice as to whether you want to do it all again. Some people remain choose not to, while others come back down to give it another try.

When did you first consider yourself as a “writer?”
The very first time a complete stranger said I was. J  You know, when your family and your support group says you’re really good at it, that’s different. They have to like you! (LOL)

Did it take a long time to get your first book published?
God, yes. I own a company called The Write Companion that helps debut authors because of the struggles they face. Many authors, unfortunately, will give up after the first rejection letter, or take it so hard that they won’t write another word. I hate that.  There are so many ‘great’ writers who threw their manuscripts into a drawer because some stranger sent a ‘form letter’ that said they weren’t good enough.  I’ve received more rejection letters than I can count, that’s why a strong spine and belief in yourself is a must when it comes to this industry.

Who is your publisher?
My publisher for the YA line is Tribute Books, an amazing woman by the name of Nicole Langan is the owner and she really stands by the author. I write a series of adventure novels for adults that I’m still not quite sure who I’m going to place with. The first title, 13, was released and has done very well - with some bestselling authors calling it “The DaVinci Code with Heart.” But I want to make sure I take my time and place it with a person who loves it as much as I do. I think that’s one of the hardest decisions for authors.  Everyone is SO desperate to get their books published, but you really have to get along with the agent and/or publisher, because you’re a team. And nothing you write is perfect. You have to keep learning and trying to get better with each book, so you need to be able to understand criticism and keep growing as a writer.

Which of your books were easier/harder to write than the others?
The Tallent & Lowery adventure series is the most difficult to write because each book has to have ‘links’ in order to create the puzzle that this librarian and her ‘swoon-worthy’ man are trying to solve. J. And each one HAS to fit in with the one before it. So a great deal of research and work with UNESCO goes into making sure that each location is absolutely correct.

What can we expect from you in the future?
The angels will continue. Book Two has been completed and is being polished right now, so there will be more of Matt and Emily headed your way.  I am currently on Book Five of the Tallent & Lowery series, and I have a YA book that I’m writing at the moment called, “Meet the Reaper,” which is a lot of fun!

Do you have a favorite character from your books? and why are they your favourite?
I’ll always love Matt. And I really feel like I ‘am’ Leah Tallent. (LOL)  She’s sarcastic, she loves books, libraries, all things written - and if I was allowed to, I would live in the NYPL for life.

Do you read all the reviews of your book/books?
Absolutely. I feel like I really should. Not only has someone taken the time to read my book out of the millions out there, which is an honor, but it’s also the only way I’ll learn and become better for the fans.

What was the toughest/best review you have ever had?
Actually, it was recent. Until Next Time was dissected. I felt truly bad that she didn’t like the ‘religious overtones’ (which I don’t believe the book has because it’s about faith and love, not ‘who’s in charge.’) But I studied the review very thoroughly. Again, as an author you should always try to improve. But you should also never get lost in a bad review. This is what freedom’s all about - some people will love your book, some people will hate it, there’s absolutely no way to please everybody.

How do you come up with the Title and Cover Designs for your book/books?
The title I come up with at the end of the book.  When all is said and done what, in five words or less, is this book really all about? The cover, however, I had an ‘idea’ but the artist who created it deserves every single bit of the credit. I was SO lucky; she did a truly outstanding job. I was blown away!

Do you decide on character traits (ie shy, quiet, tomboy girl) before writing the whole book or as you go along?
I actually have to know my characters before I sit down at a computer. In my mind, I need to understand them because this is their story - I’m just telling it. The plot is ‘thought about’ but with plots, the minute you sit down and start typing, the twists and turns appear, you can’t plan for them. That’s the real fun, being the very first reader to see what happened. It’s a privilege.

Do you think books transfer to movies well?
Only some, and it all depends on how the screenwriter gets along with the writer of the book. This can be seen in the success of Harry Potter. The screenwriter felt everything that J.K. Rowling said, and that made them phenomenal.

Which is you favourite/worst book to movie transfer?
The DaVinci Code. The book was phenomenal, but the movie left far too much out about what Dan Brown was trying to say.

What do you think about book trailers?
Like movies, if they’re done well, they are very cool. They make you really want to read that book.

What piece of advice would you give to a new writer?
Do NOT give up when someone says no!

Do you or would you ever use a pen name?
Absolutely not. If I screw up - I take the blame (LOL).

Thank you so much for having me on your blog!  It is really a honor to be among your readers!

Thank you for taking the time to take part in this Interview for my blog.