So here is the Cover Reveal for Girl Three by Tracy March, the book itself is released in June 2012 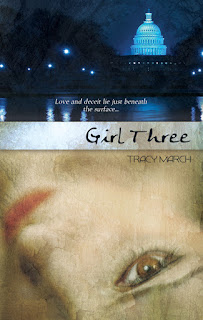 Girl Three by Tracy March
Bioethicist Jessica Croft, estranged daughter of a federal judge, has avoided the players, power, and passions of Washington, DC. But when her sister Sam’s suspicious death is classified as natural, Jessie resolves to expose Sam’s murderer. Pursuing elite suspects on both sides of the stem-cell-research debate leads her to security consultant Michael Gillette, who seems to know more about Sam than he’s let on.
Michael has a vested interest in Jessie’s plight. Her sister died on his watch—while he wasn’t watching. His plan to find her murderer becomes complicated when Jessie’s father hires him to protect Jessie, and his interest turns from professional…to romantic.

Together Jessie and Michael must unravel a mystery rife with political agendas and deceit. When confidential papers reveal a fertility scandal surrounding the enigmatic Girl Three, the two realize the danger of exposing the truth. Who is Girl Three? And will the murderer kill again to keep a secret?
Follow Tracy to stay up to date on all the news about Girl Three, including the upcoming buy links!

Add Girl Three to your TBR pile on Goodreads!
Posted by Jeanz xx at 09:00