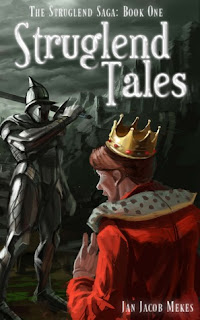 Struglend Tales is the first book in The Struglend Saga, a series of comedy fantasy books written by Jan Jacob Mekes. The book follows Edward, the ugliest and probably most haphazard king Struglend has ever had, and his herald Fred, as they go on a quest to restore order to the universe. Well, maybe not the universe, but at least the little piece of land they call home – Struglend. In their journey to remove the evil knight who has invaded the kingdom, they meet several hilarious characters and often find themselves in tight situations to manoeuvre out of. Will they succeed in driving out the evil that so brutally violated their land? Maybe they will, maybe they won’t. What’s certain is that you’ll have many a laugh while you read and find out.