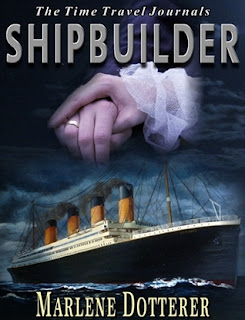 BLURB from Goodreads
Imagine being there before the Titanic set sail. Now imagine being there before she’s even built. Sam Altair is a physicist living in Belfast, Ireland. He has spent his career researching time travel and now, in early 2006, he’s finally reached the point where he can send objects backwards through time. The only problem is, he doesn’t know where the objects go. They don’t show up in the past, and no one notices any changes to the present. Are they creating alternate time lines? To collect more data, Sam tries a clandestine experiment in a public park, late at night. But the experiment goes horribly wrong when Casey Wilson, a student at the university, stumbles into his isolation field. Sam tries to rescue her, but instead, he and Casey are transported back to the year 1906. Stuck in the past, cut off from everyone and everything they know, Sam and Casey work together to help each other survive. Then Casey meets Thomas Andrews, the man who will shortly begin to build the most famous ship since Noah’s Ark. Should they warn him, changing the past and creating unknown consequences for the future? Or should they let him die?

Oh, wow where do I start? I loved this whole book, the concept of the time travelling, and of course one of my favourite subjects in it The Titanic.
Casey is the "innocent bystander" in this really just walking through some gardens where the scientist Sam Altair is setting up his time travel experiment wanting to send a tree back in time. Casey happens to suddenly be near that tree so Sam runs out to warn her and they both end up being sent back in time.
There they have a choice of trying to prevent certain events from happening. Quite by accident Casey meets Thomas Andrews the man behind the design and building specifications of the Titanic. After much deliberation and discussion Casey and Sam decide to try to intervene and if nothing else prevent some of the lives being lost on the Titanic. I do not wish to give-away too much of the actual story, you will have to read the book to find out what happens to Casey and Sam and how they become involved with Thomas andrews and the Titanic.
I loved the descriptions in the book, the details, the history and the plot/stories made up around the actual true history of Titanic. I enjoyed the fact that Thomas Andrews was in fact a real person, such a shame we cannot go back in time to save everyone that perished the awful night that the "unsinkable" ship sank.
I loved learning about the fashions of the time, all those extra buttons etc as well as the customers and social etiquettes of the time too. What women were expected to do and more importantly not to do.
I would recommend this to those who like books with, romance, and historical elements to it too.This book is the complete story although I suppose there could be a bk two that would follow the young present day Sam, but I would be worried it would spoil this first excellent book. So to sum that one up I am a bit unsure if I would really want a bk 2 or not having said that if one came out I would definitely have to read it.
So did I like it? Love it Yes. Would I recommend it? Yes