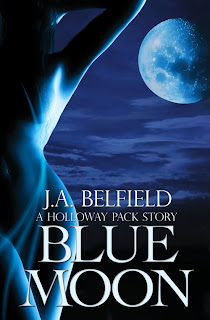 Someone is watching the Holloway pack, and this time, the female isn’t the target.Life with a group of seven male werewolves worries Jem Stonehouse not one bit. She is engaged to the Alpha’s son Sean Holloway after all. So what has Jem’s territorial instincts on high alert? The pack’s latest addition. Both of them. None of the men think there’s a problem with the new girlfriends. Jem's intuition tells her otherwise—that and a nagging suspicion the new females aren't there to partake. Jem believes they’ve joined in to take.The question is ... What? As the eve of the blue moon draws ever closer, Jem’s running out of time to find the answer and outwit a thief of the worst possible kind.A woman who believes she can’t lose.

MY COVER COMMENTS
Hmmmm......cover definitely strongly suggests this is an aimed at Adults novel. Like the colour of the cover, the dark blue and the moon suggesting mystery.....makes me want to read it!