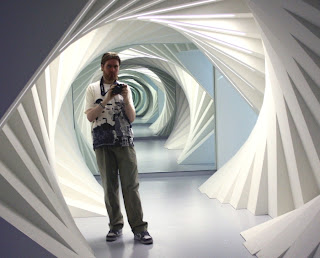 
My name is Jan Jacob Mekes, and I was born in the beautiful city of Rotterdam, in the Netherlands, where I currently live as well. And no, in this case Jan is not a girl's name (in mainland Europe, Jan is traditionally a boy's name, comparable to the English name John), it's actually part of a double first name.

Did it take a long time to get your first book published?
The idea for Struglend Tales was born in 2008, so if you just look at the numbers, it has taken four years to get from there to publishing it. However, when I first conceived the idea, it just consisted of two interlinked short stories, or tales. Over time, I kept adding chapters, and eventually worked the whole thing into a complete book.

Who is your publisher? or do you self publish?
I've chosen to self-publish. Partly because of practical considerations (imagine the difficulty in trying to find a publisher in the Netherlands who'd publish an English work), but also because I feel indie is the best way to go. Sure, it's hard, but with internet access at everyone's fingertips, the need for a middleman is quickly becoming obsolete.

What can we expect from you in the future?  ie More books of the same genre? Books of a different genre?
I'm currently working on a novel that's a bit hard to classify in terms of genre. It has some fantastic elements, it features war, and two children in a main role. I hope to have it finished this year, so you'll find out more about it then.

Do you have plans for a new book? Is this book part of a series?
I already have the second book in The Struglend Saga series planned out, and I'm going to work on that after I've finished writing the novel I'm currently working on. I hope the series will get many more books, but that will of course partly depend on how well-received Struglend Tales and its sequel(s) will be.

Do you have anybody read your books and give you reviews before you officially release them? ie. Your partner, children, friends, reviewers you know?
I had a good friend who is a talented film maker read several drafts of Struglend Tales. Because of his background, he is able to point out things I hadn't considered, especially concerning action scenes. He was brutally honest in his feedback, which helped me a great deal in improving the book.

Would you ever ask a reviewer to change their review if it was not all positive about your book/books?
No. I firmly believe that honesty is the only way for the indie book scene to be taken seriously. If we all just praise each other's books without pointing out flaws, writers won't get better, and readers won't take notice. Of course, if a 5-star review is well-deserved, there's no reason not to give it.

How do you come up with the Title and Cover Designs for your book/books?Who designed the Cover of your books?
I asked a very talented friend of mine, Ado Ceric, if he'd be interested in creating the cover image for my book. To my pleasant surprise, he agreed. The title design I did myself, using a bit of Paint.NET handiwork (I hope divulging this doesn't subtract from the magic). But obviously, the cover illustration is the main attraction here, and the book I'm working on, which I mentioned earlier, is actually inspired by some of Ado's artwork.

How do you come up with characters names and place names in your books?
For place names, sometimes I'll just pick a name that sounds cool, other times, especially for places that play an important role in the story, I try to find a name that fits well. For instance, Struglend comes from the Middle English word "struglen", where we got our word "struggle" from. For character names, I usually have a basic idea of the role a character should play in a story before naming them. With that in mind, I search on baby naming sites (in a way, characters are a writer's babies) to search for a fitting name. Having a name that reflects the character in some way adds an interesting dimension to the character.

Do you basic plot/plan for your book, before you actually begin writing it out? Or do you let the writing flow and see where it takes the story?
I only do very basic outlining, so I'm what you'd call a "pantser" as opposed to a "plotter". I find that often the characters will start to take the reigns and steer the story into a certain direction. If I like that direction, I'll go along with that; if not, I'll pull the reigns a few times and use my spurs on the wayward characters.

Is there a certain Author that influenced you in writing?
For Struglend Tales, the author that most influenced me is Terry Pratchett. I love his unique brand of humour, and he's shown that fantasy books don't need to be all serious, there's plenty of room for humour too.

Which format of book do you prefer, ebook,hardback, or paperback?
Personally, I love holding a real book in my hands. I love a well-made hardback book, but for practical purposes, I prefer paperback. However, I realize many people use e-books now, so it made more sense for me to release Struglend Tales in that format first. However, I do plan on releasing a paperback version as well.

What are you currently reading? Are you enjoying it? What format is it?(ebook, hardback or paperback)
I'm currently almost done reading The Face of Battle by John Keegan (paperback version), which is a non-fiction study of the battles of Agincourt, Waterloo, and the Somme, from the soldier's point of view. I'm hoping to glean from that a better understanding of what battles are really like, and use that knowledge in future books when I'm writing about war.

Do you think ebooks will ever totally replace printed books?
I hope not! And as long as it's done in an eco-friendly fashion, I see no reason why printed books should ever disappear. There's just something magical about opening a book and being greeted by carefully crafted words, set in a type that reflects the character of the book itself. It's a bit like putting on a record, hearing that needle scratch as you wait for the music to play. I do admit I'm a bit of a romantic, and the reality is that the market share of e-books is likely to continue to grow, but I don't think printed books will ever disappear altogether.

What piece of advice would you give to a new writer?
Keep at it! You've probably heard that new writers start several books that they never finish before writing their first complete book, and from experience I can say that it's true. But don't give up, because with every word you write, you learn to be a better writer. Another tip I'd give is to write short stories for others to read. The feedback you'll get will encourage you and help you become a better writer.
Posted by Jeanz xx at 12:00