REVIEW - THE STORM - THE RAIN BY VIRGINIA BERGIN 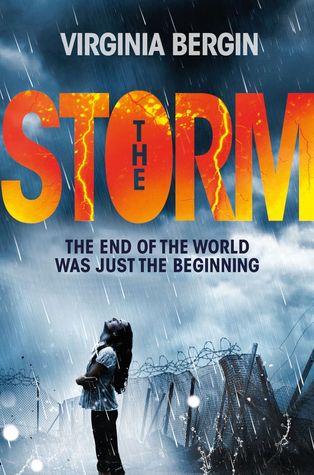 BLURB from Goodreads
"I'll tell you a weird thing about apocalypses - a thing I didn't even know until I was in one: they seem pretty bad, don't they? Well, take it from me: they can always get worse."Three months after the killer rain first fell, Ruby is beginning to realise her father might be dead . . . and that she cannot survive alone. When a chance encounter lands her back in the army camp, Ruby thinks she is safe - at a price. Being forced to live with Darius Spratt is bad enough, but if Ruby wants to stay she must keep her eyes - and her mouth - shut. It's not going to happen. When she realizes what is going on - the army is trying to find a cure by experimenting on human subjects - Ruby flips out . . . and makes an even more shocking discovery: she's not useless at all. The Storm begins

INITIAL THOUGHTS
Well after reading The Rain, I couldn't wait to read The Storm, I had so many questions, the main one being Will Ruby ever meet up with her dad? Because surely then all her problems will be over? I actually chose to read this one straight after book one. I usually read at least one different book before continuing a series but felt so invested in & engrossed in the world created by Virginia Bergin, that I picked this one straight up and began reading it late one night.

MY REVIEW
So again I was super lucky and downloaded this one from Netgalley and my daughter also received a paperback copy. So thank you so much to Netgalley and Macmillan.
The cover I have featured above is the UK version which I will base mt review on. So the cover has a female on it standing face upwards allowing the rain to pour down on her, almost embracing the feeling only fresh rain can give you. Who could it be? Doesn't the figure know the Rain is deadly? Could a cure have been found? Also featured on the cover is a tall wire fence with rolls of barbed wire around the top. Is the figure on the outside trying to get in? or on the outside after escaping? Or is the person trapped on the inside trying to get out? I think we can safely say that this book works brilliantly making you curious about who the figure is, why they are in the rain and whether they are in the fencing or outside the fencing. The byline of "The End Of The World Was Just The Beginning" fits this book so well, as The Rain was "just the beginning". . .and The Storm follows on very seamlessly.
So would I pick this book up from a book store shelf purely on how the cover looks? Definitely, and wow I'd just have to buy this one after reading book one anyway!
This book picks up right where we left off in The Rain. It's honestly just as though you have turned just one page! I loved that aspect. I also find the way Ruby talks straight to us the reader and says what we may think if/when we find her journal.
So the book begins with a sort of small not even page long prologue. It's almost like Ruby is in a therapist room saying it or talking directly to us the reader. If the book was a film, the surrounding set would fade into the background and Ruby would look directly down the camera lens and tell us the reader directly. 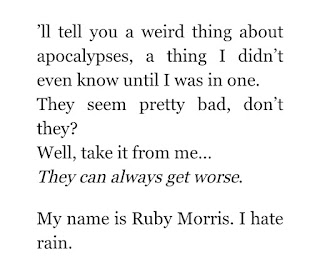