BLOG TOUR - WHAT YOU LEFT BEHIND BY JESSICA VERDI 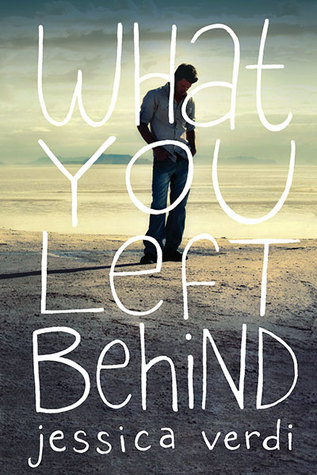 BLURB from Goodreads
It’s all Ryden’s fault. If he hadn’t gotten Meg pregnant, she would have never stopped her chemo treatments and would still be alive. Instead, he’s failing fatherhood one dirty diaper at a time. And it’s not like he’s had time to grieve while struggling to care for their infant daughter, start his senior year, and earn the soccer scholarship he needs to go to college.The one person who makes Ryden feel like his old self is Joni. She’s fun and energetic—and doesn’t know he has a baby. But the more time they spend together, the harder it becomes to keep his two worlds separate. Finding one of Meg’s journals only stirs up old emotions, and Ryden’s convinced Meg left other notebooks for him to find, some message to help his new life make sense. But how is he going to have a future if he can’t let go of the past?

When and where did the idea of writing What You Left Behind start?
I started this book in the summer of 2012, if memory serves me correctly! I had just graduated from The New School with my MFA in Writing for Children, and I was work shopping this book with my critique group in New York City.

Are there parts in the book inspired by real life events?
I was inspired by an article I read about a teenage girl who had cancer and was pregnant, and wasn't allowed to make her own decision of whether she wanted to abort her pregnancy and continue her cancer treatments, or stop the cancer treatments and have the baby. Her parents chose for her (they chose stop cancer treatments and have the baby) and she died a couple days after giving birth, leaving the baby to be raised by her boyfriend. This isn't exactly what happens in the book, but the issue of choice is one that is very important to me, so I wanted to write about that.

Is there a particular character you see yourself in? If yes, why?
I relate to all the characters in the book in different ways, but I feel most connected to Ryden (the book's narrator). Even though we're VERY different in almost every way, I just really understood him for some reason.

What are the struggles you experienced in writing What You Left Behind?
This book took a long time to write. About a year and a half to get a solid draft. I realized after working on it for a few months that I'd started the story in the wrong place, and I ended up scrapping about 75 pages and starting over. I'm really glad I didn't give up on it though!

I've heard that this is your first book written in the male POV. Tell us about the experience of writing in Ryden's perspective.
I think, because he's a boy and I'm not, I may have subconsciously felt more freedom to just take his character wherever it needed to go, because, since we were already so different, there was no element of "me" clinging to him. No "Well, I would or wouldn't do that," etc. Also I'm glad to have written a book from the POV of a boy because there are plenty of boy readers out there who need to see themselves represented in literature. I'm hopeful they'll pick up the book and find Ryden interesting and identifiable.

Is there a story of how you come up with the characters' names?
Not really. I just kick ideas around until something fits. I always know it when I land on it though. Weird how that works. For last names, I usually garner ideas from the U.S. Census website.

Do you keep a journal just like Meg's?
No, I've never been a journaler, but I've always wished I were. It seems incredibly therapeutic. But I find it's easier for me to express myself through fiction, rather than writing down my own specific experiences.

What shall everyone expect in What You Left Behind?


They can expect a story about grief, guilt, hope, friendship, family, and life not turning out exactly the way you may expect. I truly hope readers will be both entertained and touched by Ryden's story!