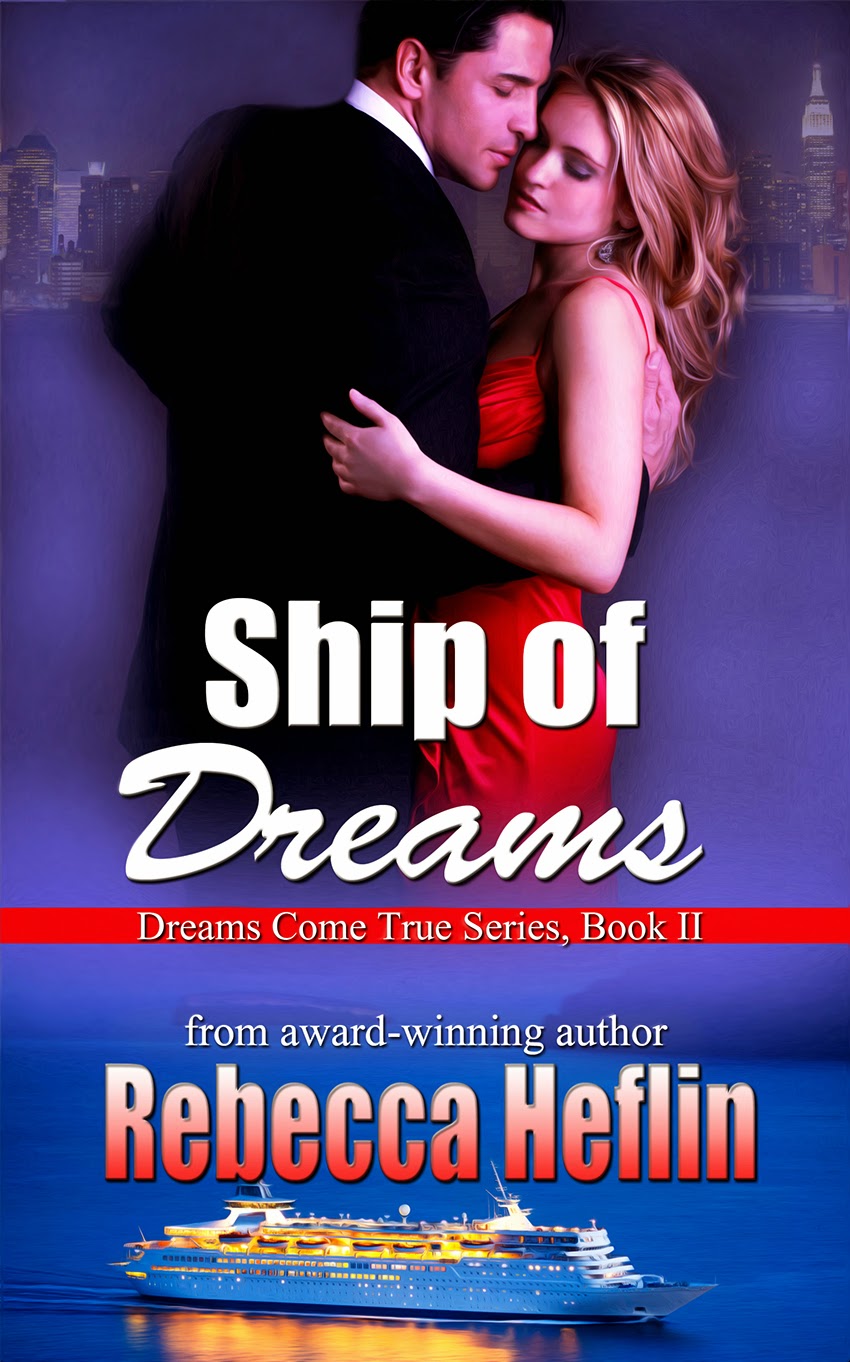 BLURB from Goodreads
Advertising Diva, Laura Armstrong is after Imperial Cruise Lines, the biggest account of her career and the one that will lead to the next step in her Life Plan of becoming one of the most powerful women in advertising. That winning the account will also prove her father wrong is a bonus. Sexy Southern Gentleman, Nathan Maxwell, is after that very same account, but for completely different reasons. Landing the account means a sizeable bonus just in time to save his family’s farm, and the only stable home his sister’s ever known, from foreclosure. When the two end up on the same ship in the middle of the Mediterranean for a clandestine reconnaissance mission, Mt. Vesuvius isn’t the only thing that could erupt. Will Nathan sink her ship of dreams before it ever leaves port, or will the way to love be smooth sailing?

What is your name, where were you born and where do you live now?
Hi everyone! ::She waves:: I’m Rebecca Heflin. I was born in North Florida and now make my home a couple of hours south in North Central Florida.

Did it take a long time to get your first book published?
I think I’m a bit of an anomaly. I began writing my first book, The Promise of Change, in 2009. It took me about six months to finish that first draft. After submitting that version to contests and getting instructive feedback, I rewrote it, adding some 30,000 words to the original version. In 2011, I learned that that unpublished manuscript was a finalist in a writing competition, The Royal Palm Literary Award. Two weeks after that, I received ‘the call,’ or in my case, ‘the email’ that my publisher wanted the book. So, from first word to publication was about two years.

Do you work another job as well as your writing work?
I do have a day-job. I’m an attorney for a major state research university. It’s a pretty demanding job, so I have to squeeze in time to write whenever I can find it.

What is the name of your latest book, and if you had to summarise it in less than 20 words what would you say?
My latest book is Ship of Dreams, Book #2 in the Dreams Come True Series. Advertising diva, Laura Armstrong, meets her match in the biggest obstacle to bagging a major account and a corner office.

How long does it usually take you to write a book, from the original idea to finishing writing it?
While the first book I wrote only took six months (plus another three to rewrite it), it takes me about a year from idea to final draft. I’d like to whittle that time down, and I am getting faster, the more books I write.

Do you have plans for a new book? Is this book part of a series?
I’m currently working on Dreams of Her Own, Book #3 in the Dreams Come True Series. After that, I’m going to try my hand at a novella, Romancing Dr. Love.

Do you have a favourite character from your books? and why are they your favourite?
I’d say Lacey, from Rescuing Lacey, is my favorite heroine so far. Mainly because she is so VERY different from me and I had such a great time writing her.

How long have you been writing?, and who or what inspired you to write?
I began writing in 2009. I’d wanted to write for quite some time, but never had the courage to do it. It took a mid-life crisis of sorts to make me realize it was now or never. When I started my first manuscript, which became The Promise of Change, I had a goal: publish a book by the time I’m fifty. I published two books by the age of forty-nine, and at fifty-two I haven’t looked back.

Do you basic plot/plan for your book, before you actually begin writing it out? Or do you let the writing flow and see where it takes the story?
I’m more of a pantster – I fly by the seat of my pants. And each book begins differently. For Rescuing Lacey, I started with a scene that occurs about a third into the book. The scene was based on an actual experience my husband and I had while on a trip to Costa Rica. After I figured out why the heroine was there, what was at stake, and what role the hero played in her journey, Rescuing Lacey grew in both directions from that scene. With Dreams of Perfection, I started with a premise: What would happen if a romance writer’s hero actually came to life, a la Pygmalion. This quickly turned into the Dreams Come True Series, when I realized two other characters in the book deserved their own stories. The second book, Ship of Dreams, released February 11, 2015.

Have you ever suffered from a "writer's block"? What did you do to get past the "block"?
I do suffer from writer’s block, especially when I hit that sagging middle. When I’m stuck, there are several methods I use to get ‘unstuck.’ Sometimes I walk away from the writing. Take a walk or tackle a mundane household task, and the next thing I know, an idea has popped into my head and I’m ready to go. Another method I’ve used is to stretch out on the couch, the bed, a hammock, even the floor, and close my eyes, letting my mind wander. What am I having for dinner tonight? What was the name of that shop in Santa Fe? The one with the fabulous spices? What was the name of our guide in Costa Rica? Ooh! Guide. Monteverde Cloud Forest. Night hike. That’s it! The hero and heroine go on a night hike in the cloud forest. Voila. Problem solved.

What piece of advice would you give to a new writer?
Read novels similar to the ones you want to write.
Write.
Read books about the craft of writing.
Write.
Repeat.

If you could invite three favourite writers to dinner, who would you invite and enjoy chatting with?
Ooh! Definitely Kristan Higgins, Julie James, and Nora Roberts.