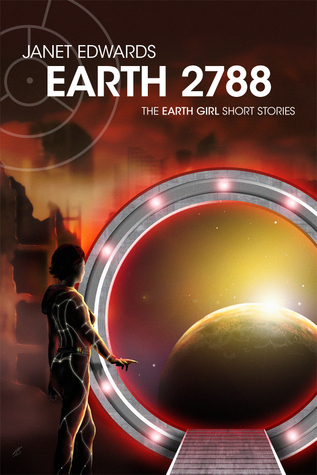 BLURB from Goodreads
EARTH 2788 - The Earth Girl Short StoriesYou can read this set of stories for free on the author's website until at least the end of 2015, http://janetedwards.com/free-stories/. They are also available as a Kindle ebook.A collection of eight prequel stories, set in the distant future of the Earth Girl trilogy (Earth Girl, Earth Star, and Earth Flight)In the year 2788, people use interstellar portals to travel between over a thousand colony worlds scattered across six sectors of space, each with their own contrasting cultures. On the rich worlds of Alpha sector, you aren’t considered fully adult until 25, while the frontier worlds of Epsilon sector expect a girl to marry at 17. Clan centred Beta sector is notoriously permissive, while Deltan worlds consider it shocking behaviour to kiss in public. In Kappa sector, the military battle to make new worlds safe for colonization, while Earth is a semi-abandoned ruin.Each story features one of the characters from the Earth Girl trilogy. Eight people, with eight very distinctive backgrounds and problems, all destined to get caught up in one girl’s fight for acceptance. A fight that will change Earth forever. EARTH 2788 – Short story. Jarra trespasses on forbidden ground.ALPHA SECTOR 2788 – Short story. Dalmora’s sheltered life is about to change.BETA SECTOR 2788 – A novelette. Lolia’s marriage is falling apart.GAMMA SECTOR 2788 -Short story. Krath’s life is literally on the scrap heap.DELTA SECTOR 2788 – Short story. Fian’s father is planning his future for him, but Fian has his own ideas.EPSILON SECTOR 2788 – Short story. On a frontier planet, Amalie is considering possible husbands.KAPPA SECTOR 2788 – A novelette. As he hands over a new world to its first colonists, Colonel Riak Torrek plans to retire.ZETA SECTOR 2788 – A novelette. The heroic Major Drago Tell Dramis has finally found something that scares him.

INITIAL THOUGHTS
I purchased my daughter Rachel (of Rai29BookReadNReview) Earth Flight at Christmas as we had both read and thoroughly enjoyed Earth Girl and Earth Star and I was taking a look at the series on Goodreads when I discovered Earth 2788. So I took a look at it on Amazon and couldn't resist. After reading the description I decided to learn more about the characters featured in the series.

MY REVIEW
I bought this story collection from Amazon. I know they are free to read on Janet Edward's website but I strangely cannot read on a computer or laptop long enough to read even a novelette before it triggers my meniere's disease. The book is listed as 0.5 but I think after reading it that fans would enjoy this collection before, during or after reading the Earth Girl Series.
The cover fits in well with the rest of the series. The main features on it are a portal and a female standing looking through the portal. The female could be Jarra?
So would the cover make me pick up this book in a book store shelf? Being totally honest, I'm unsure, if I hadn't read the other books in the series possibly not. If I hadn't read the other books in the series I would be worried this one would be too "Star Trek/Star Wars" for me. However being part of this great series, the book cover wouldn't put me off!

FINAL THOUGHTS
I really enjoyed having the insights these short stories and novelettes have given into the back stories of some of the great characters from the Earth Girls Series. I am now really looking forward to reading Earth Flight. Some of the stories are funny, some explain the perhaps more odd or intricacies of the characters and how and why they react to each other in certain ways. For example the way of the Beta Sector people who show lots of flesh, have different types of marriage, duo, and triad. I also loved the use of the "slang" that Janet Edwards came up with for this series. Some easier to translate into "our normal language" and explain than others, such as amaz = amazing, nardle = idiot etc. I also enjoyed the poignancy in the short story about Colonel Riak Torreck as he stands looking at pictures from when he first joined the military and we learn he was in a triad marriage. Just brilliant!

So did I enjoy this collection of short stories? I loved it, learning the back stories of the existing characters.
Would I recommend this collection? Yes, it's a must read for fans of the Earth girls series. And a great way of sampling the books, it could, in my opinion, be read and enjoyed before, during or after the series.
Would I want to read more of this series? Yes, I have yet to read Earth Flight, and I'd like to read the Earth & Fire 0.2 novella even though I have read the first two chapters within this collection. Having said that I have yet to find it on Amazon UK.
Would I want to read other titles by this author? I have loved the style of Janet Edwards writing, she really pulls you in and the original thought up slang is really great too, or should I say amaz! or zan!