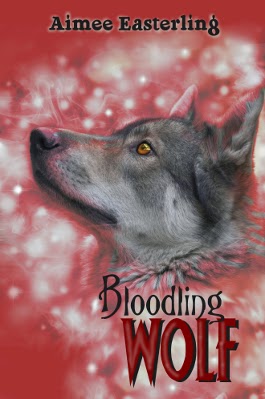 BLURB from Goodreads
Bloodlings are rare shifters who are born in animal form. As a bloodling, Wolfie doesn't walk two-footed until he becomes a teenager, then he finds that the world looks very different after growing up as a canine. Can Wolfie find acceptance in a pack despite his differences?

INITIAL THOUGHTS
To be totally honest I'm not sure how I came across this novella, I think I actually came across the authors other Shifter genre books and then thought as this one was just 99p I'd try this one first. So I haven't read any shifter books for a while, I'm awaiting the nest Holloway Pack title by JA Belfield and the next Jessica McClain title by Amanda Carlson so I was sort "in need" of a shifter book to read. I guess you could say if I am pining away for a shifter novel by JA Belfield or Amanda Carlson, then my expectations of Bloodling Wolf are quite high. I haven't read any other titles by this author so it's kind of a "pot luck" choice.
MY REVIEW
I purchased and downloaded this title from Amazon UK.
The cover of this book is a shade of red/pink with what looks like mini clouds around a wolf's head. To be totally truthful it was the blurb that caught my attention more than the cover. The cover doesn't really do the book any favours or justice. I can imagine cover art can be quite an expense, and many authors change and update their book covers as the books become more popular.
Would the cover make me pick this book up from a book store shelf? Being truly honest here, it probably wouldn't totally put me off the book but  it also wouldn't make me hurriedly pick it up either. It is more of a case of I'd pick the book up despite not loving the cover to learn more about it. I think the cover gives the impression that it is tween aimed.
This book introduces a new shifter concept to me, a "Bloodling Wolf". So I'll explain what a "Bloodling Wolf" is first. A Bloodling Wolf is a shifter that is born in their wolf form and does not shift to his/her human form until they reach puberty. It's kind of like a human child with a wolf parent, they experience their first shift to wolf form at puberty. Being a Bloodling is very rare.
This novella is told from the point of view of the Bloodling wolf who we learn is called "Wolfie". Wolfie is abandoned by his Alpha father and cast out on a bitterly cold winters night in the snow for nature to take it's course. The Alpha cannot tolerate the fact Wolfie is a Bloodling and the fact his birth literally tore apart his beloved wife. However there is one more person who has affection for Wolfie and that is his Uncle Oscar, his mothers youngest brother. Wolfie is discovered by another pack member, a little toddler called Chase. Uncle Oscar cannot openly do anything about the fact the pack Alpha has thrown out the newly born bloodling, however he can change the odds in favour of the bloodling being found and thars exactly what he does. Chase's mother takes Wolfie in and the boys become inseperable and consider themselves brothers. In the novella the term "milk brothers" is used as Chases mum feeds both boys/wolves.  Shifter/Wolves have a strong pack mentality so it's no surprise when the Bloodling in this novella is constantly tormented and teased about his differences. The Alpha goes on to have more children and gets his "perfect son" who is said to be destined to become the next Alpha when the current one steps down/dies. The male lineage is everything, so Justin is quite literally the blue eyed boy in the Alpha's eyes and gets away with much more than the other young pack members could. Naturally there is also animosity between Wolfie and his half-brother Justin. Justin just looks around for more ways to hurt Wolfie, until he realises he cannot hurt Wolfie in a direct confrontation so he moves on to hurting anyone that Wolfie cares about.
This ends up with Wolfie making a deal with Justin and leaving the pack. However he has a surprise when he turns up at the bus stop the next day to begin the journey away from his home and everything he has.
So did I enjoy the novella? I did, though I will say I hated the fact that the main character of the novella was called "Wolfie". Couldn't his Uncle Oscar have given him a name that his mother had talked about prior to his birth, or just given "Wolfie" a name himself.  It just irked me throughout the novella. I mean Chase had a proper name could Chase or Chase's mum have given "Wolfie" a better name? Would I recommend the novella? I think the novella served it's purpose, it introduced certain characters to us, and set the scene for the next book. Would I want to read more in this series/about these characters? I do intend on giving Shiftless and Pack Princess a go. Though these are listed as standalone's containing the same characters rather than a series on Goodreads.
Would I want to read other titles by this author? I enjoyed the pace of the novella and the character's the author introduced so yes I would want to read other titles by this author if they are in the genres I like to read.

PLEASE NOTE:
After reading and reviewing this book, the cover pictured above has been changed to the one I have pictured below. (I discovered this on Amazon UK)  I think the new cover is much better then the initial one. The blue of the cover suits the characters and "moody teenage" characters much more. It feels like his cover is targeted at an older audience too. There's the pull of finding out who the lone figure is and why they are going off somewhere all alone. I also like the moon, most shifter genre lovers will know the relevance of a moon in the shifting cycles of a wolf.
Would the cover make me pick this book up from a book store shelf? Yes, I would want to know who it was on the cover where they were going off into the night and why. I would certainly pick up a book with this cover to learn more about the book from it's blurb. I think the lone figure is highly relevant to the book too, as Wolfie has began being able to shift to his human form within the novella too. 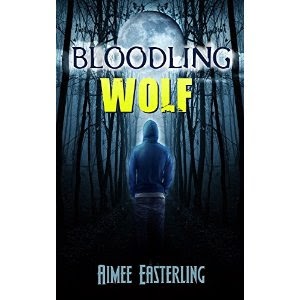 So which cover do you prefer from the two featured in this review?