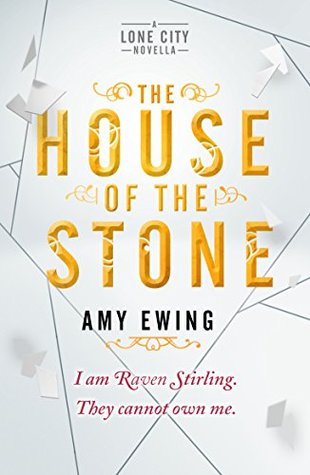 BLURB from Goodreads
In The Jewel, we followed Violet in her servitude under the Duchess of the Lake. Now we'll hear Raven's story and her time as a surrogate for the Countess of the Stone in this digital novella from Amy Ewing.When Raven is bought at the Auction, she knows immediately that things will not go well. And when she arrives at the Countess's palace, Raven quickly discovers that the Countess is much less interested in having a baby than experimenting with Raven's mind and body. Raven can only hope for an escape…and to see Violet again, all the while reminding herself that she is Raven Stirling, and she does matter.

INITIAL THOUGHTS
Looking forward to reading this one, perhaps it will answer some of the questions I have about Raven from BK#2. I know I am actually reading this novella out of order, but I hope that won't spoil my enjoyment of it too much!

MY REVIEW
I bought this novella from Amazon UK when it was just 99p, which I guess is an okay price for a novella, dependent on it's length and content.
The cover that I  have chosen to feature is my favourite out of the two covers that I have seen. The cover is a clean luxurious mirror like background, with the title in an opulent gold colour with some artistic swirls and flicks within it. The cover also features the series title in a plainer standard font at the top of the cover. There is also the byline that becomes like a mantra to Raven during the novella which is "I am Raven Stirling. They cannot own me."
So would the cover make me pick this book up from a shelf in a book store? Yes, it would attract me eye.
This novella is focused on Raven Stirling or Lot 192 in the auction. The book starts from the point that the girls are all at the auction in the waiting room and basically covers the auctioning of her, rather like in The Jewel we went through the auction seeing it all through the eyes of Violet.  The last words Violet and Raven exchange are that they will never forget each other. It's quite likely that they will never see each other again, never mind get the chance to speak to each other. Naturally as Violet was scared whilst standing around in the waiting room, so is Raven. Raven may be scared and nervous but she is determined not to show her fear when she appears on the auction stage. Raven's way of coping is to attempt to stare the women right in the eyes. One woman catches Raven's eye, a large woman who seem's so fat Raven is shocked that she can fit into the tight black satin dress she is wearing. The woman see's Raven looking at her and smiles slightly as Raven stares at her in the eye. It's such a chilling icy smile Raven visibly shudders as she hopes that the woman she is looking at doesn't buy her.  Raven has a phrase she continue's to repeat in her head "I am Raven Stirling. They cannot own me".  So the auctioneer begins by listing Raven's lot number and her statistics, including her augury scores, and then the bidding begins at two hundred thousand diamante's, from The Lady of the Line. Raven is shocked at such a high starting bid amount. Raven also notices that the woman in the tight black satin dress also bids, so Raven learns the woman is called The Countess of the Stone, which means she is from one of the founding houses. The bidding goes higher and higher, The Countess of Stone is bidding hard and high, she seem's determined. The lazy way she waves her bidding rods seem's like she is prepared to pay a high price for Raven. Whilst the bidding goes on and on Raven thinks back to the happy times that she had shared with Violet at Southgate. Suddenly the word "SOLD!"" breaks into Raven's dreaming, the voice continues "Sold for three million five hundred thousand diamante's to the Countess of Stone!" Of all the people to have bought Raven it was the one she desperately didn't want to be bought by. Raven is lowered through the floor down into the bare concrete room under the stage.
The novella goes on to tell how Raven is treat by the Countess of the Stone, kept in  horrid conditions to begin with. The only chink of light being when she is taken out to a dinner and gets to see Violet. Raven soon learns what an evil woman her new mistress is, and her warped henchman Frederick. The one person who shows Raven a sliver of kindness is Emile and to begin with Raven refuses his help and healing creams. Raven soon realises that Emile may be the only ally she has and tell's him her name, though he still call's her 192. What Frederick and the Countess of the Stone just refer to her as "it". We get another point of view from Raven on the fact that surrogates are put on a leash, like some sort of animals or pets. This is a novella but it contains so much I feel I could go on and on about this novella!
So did I enjoy this novella? I totally adored it. I can honestly say that reading the novella out of it's specified order in the series in no way affected my total enjoyment of this novella. It was really enlightening to see how differently Raven was treated in comparison to Violet. I do admit that as soon as Raven revealed the fact she wished to be bought by anyone but the Countess of the Stone I just knew that she was sure to be bought by the woman she was most afraid of.
Would I recommend the novella? Definitely, if you love The Jewel, then this novella is a must read!
Would I want to read another book/novella in this series? Definitely, I have also read The White Rose BK2 and wow I thought I loved The Jewel but The White Rose is a totally amazing, action packed, shocking all at the same time.
Would I want to read other titles by this author? I would take a look at anything written by this author, I seriously enjoy her writing style. Amy Ewing gets a good grip on you at the beginning of this series in the Jewel and that hold becomes tighter and tighter the more you read in the series. I cannot wait for the next book or novella in this series. totally addictive reading!