REVIEW - ONLY EVER YOURS BY LOUISE O'NEILL 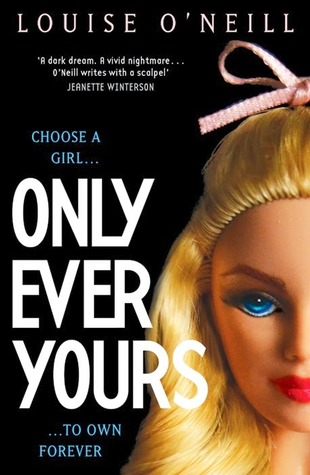 BLURB from Goodreads
In a world in which baby girls are no longer born naturally, women are bred in schools, trained in the arts of pleasing men until they are ready for the outside world. At graduation, the most highly rated girls become “companions”, permitted to live with their husbands and breed sons until they are no longer useful.

For the girls left behind, the future – as a concubine or a teacher – is grim.

Best friends Freida and Isabel are sure they’ll be chosen as companions – they are among the most highly rated girls in their year.

But as the intensity of final year takes hold, Isabel does the unthinkable and starts to put on weight. ..
And then, into this sealed female environment, the boys arrive, eager to choose a bride.

Freida must fight for her future – even if it means betraying the only friend, the only love, she has ever known. . .

INITIAL THOUGHTS
I have had this book on my “To Read” list for a while and have finally gotten around to reading it. I’m hoping that this is going to be a great dystopian. I am quite fascinated in how people view future females, and how perhaps present day worries may manifest within this female centered dystopian book.

FINAL THOUGHTS
My first thoughts and reaction upon finishing this book were "Oh wow I didn't see that ending. The ending is a rather twisted sad ending but I guess it's the only way things could have finished.  If you want a futuristic, involved, engrossing and addictive read that features genuine social issues and concerns then this is one you should read. It's a brilliantly thought provoking book. I'd truly love to Interview this author about this unusual yet in my opinion highly relevant dystopic society.