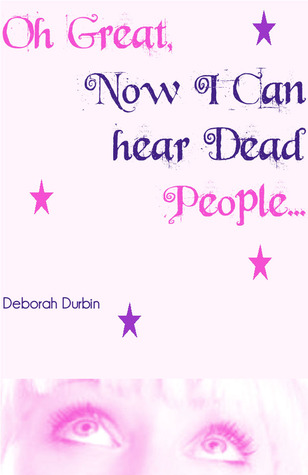 Unlucky in love, Samantha Ball is not only broke, she's £22'000 in debt and soon to be homeless if she can't get the money together for her rent, so when she's offered the chance to earn some money for a hotline to the heavens by giving tarot readings, she jumps at it, despite the fact that she doesn't have a psychic bone in her body - or does she? When Sam starts to hear voices of real dead people her psychic career really takes off and she soon becomes a psychic to the stars with her own slot on a prime time TV show. Someone however doesn't share Sam's joy and it's only when they set out to destroy her reputation does Sam really need help from the other side...Follow Sam's hilarious journey of self-discovery as she adjusts to being a grown up version of the kid from The Sixth Sense and discovers that love can often be right under your nose. 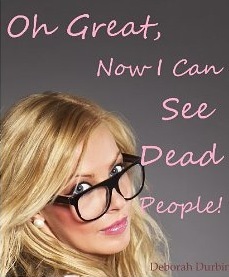 BLURB from Goodreads
Sam is back and this time she is trying to organise her wedding to Jack.It would be fine, if she hadn't accidentally let a whole host of spirits in to the world when she conducted a séance for her mother's WI meeting on Halloween.It would be fine if her newly appointed spirit guide, Ange wasn't more interested in Heat magazine and what Cheryl Cole is wearing than helping her.It would be fine if she hadn't been told that her ex-best friend Amy's life was in danger.With half the village possessed, a spirit guide who thinks she's an extra from TOWIE and her old friend in trouble, will Sam ever make it down the aisle?

‘And first on the line we have Petra. Petra, have you got a question for Crystal?’ Annette asks into her mic.

‘How can I help you, Petra?’ All of a sudden my eyes mist over. I blink a couple of times in a bid to make them water. I must have some dust in them or something.

‘Um …I wondered if you could tell me if my mum is OK.’

As I look up at the smoked glass screen in front of me that separates Annette and me from the sound studio, the mist in my eyes starts to clear, but instead of seeing Liam and Jeff, the newsreader, on the other side of the screen I see a strange hazy image. It’s not my reflection and it’s not Annette’s. I hear a voice inside my head.

‘Tell her I’m just fine and I’m sorry that she had to see me like she did,’ an elderly woman’s voice says. ‘I didn’t want to go in there. I had a bad feeling about that place. I knew that I would never leave there. Can you please tell her that I know it wasn’t her fault, but it wasn’t what they led her to believe either.’

I relay the strange message and hear the caller gasp.

‘Does this mean anything to you, Petra?’ Annette asks, looking at me with concern.

‘It was my brother’s fault, not mine. He wanted our mum to go into a home and I was too preoccupied with work to give it much thought. He suggested it and I just agreed,’ Petra says quietly.

‘She was only seventy and full of life before my brother put her in that horrible place. The last time I saw her, she looked as though she had aged by twenty years.’

‘What do you think your mum means by it wasn’t what they led you to believe?’ Annette asks.

‘I don’t know,’ Petra says. ‘The last thing I heard was that she had died peacefully in her sleep.’

‘I didn’t, you know. That’s not the truth. It was a cover-up. Tell Petra to demand an inquest,’ the woman’s voice urges me. She seems very agitated.

‘Petra, can you do something for me?’ I venture. ‘Can you find out if you can get an independent inquiry into your mum’s death?’

‘Why? Do you think something happened there?’ Petra asks nervously.

‘I … I don’t know what to think at the moment, but your mum is telling me that something has been covered up about her passing.’

Annette looks at me as if I may have just opened up a huge can of worms, but I can’t let this drop. Something happened to this lady and I have a feeling that it’s been covered up and someone is not telling the whole truth here.

I look in front of me and where I should be seeing my own reflection in the smoked glass screen I see the image of a pretty, grey-haired woman smiling back at me. I gasp and put my hand to my mouth.

‘Are you OK?’ Annette mouths to me.

‘Um … yes … yes, fine. Right, who do we have next on the line?’ I ask, as I look at the glass screen again, only to see my own reflection looking back at me. Oh, heck. Was that Petra’s mum I just saw? Until now I have only been able to hear dead people in my head and, as strange as it might seem, over time I’ve actually got used to that.

Oh, crikey! I can’t say I’m a hundred per cent confident or happy at having psychic abilities, but I’ve learned to live with them, and it’s not only become my job, it’s now my life, but I’m not altogether sure that I want to be able to see dead people.

Miracle did say that the more I learn to trust myself, the more I will be able to pick up. I make a mental note to phone her later and tell her what I’ve seen.

Annette looks concerned for a moment and then flicks a switch up to signal that the caller on line two is on air and ready to speak.

‘And caller number two, what can Mystic Crystal do for you?’ she asks.

‘Yeah, er, hi. Yeah, I’d like to know how Mystic Crystal does it so convincingly,’ a young man says through the speakers of the radio. Oh, great, another sceptic to add to the list.

‘I mean, she’s very convincing and everything, but we all know it’s a load of bollocks. I just wondered how she does it so well,’ the male caller continues. ‘Take that woman just now. You’re not telling me that she’s for real. That magician, what’s his name? Darren something or other. He said psychics are a load of crap. I don’t blame you, mind you; if I could carry it off I’d be earning a fortune convincing people that there is life after you’re six feet under.’

‘Oh boy, is he gonna get a shock when he goes!’ An Irish woman’s harsh voice comes into my head. ‘Silly sod, where does he think we go? Frigging idiot!’ she continues. ‘Mind you, I thought I’d be going straight to Hell, me!’ she cackles.

Who are you? I mentally ask.

‘…and that’s another thing, how come, if they’re really up there, how come they can’t give her something useful like the lottery numbers for Saturday night?’ the caller demands to know.

‘Tell the idiot that he will still be an idiot, no matter how much money he’s got in the bank!’ Marion laughs.

‘Can I just stop you there a moment, love?’ Annette says.

‘Crystal, would you like to enlighten the gentleman, or shall we just cut him off now?’

‘No, that’s fine. Everyone is entitled to their own opinion on the subject. And I don’t feel that I have to justify myself to anyone. However, there would be no point in giving this caller Saturday night’s winning lottery numbers as he will always be an idiot, regardless of how much money he has.’

‘Eh?’ the caller responds, and Annette looks at me as if I might just have overstepped the mark, again.

‘His Aunt Marion has just told me to tell him that.’ I smile smugly and poke my tongue out at the microphone in front of me.

‘Nah, nah, you don’t even know me Auntie Marion.’

Boy, and to think there are people like this out there on the streets!

'Err, yes, and this is a psychic show,’ Annette says, pulling a face at her microphone. Liam and Jeff are wetting themselves laughing in the booth in front of us.


I will be reading this book as soon as I am able as I was given a complimentary copy in exchange for this post and my honest review!
Posted by Jeanz xx at 03:00