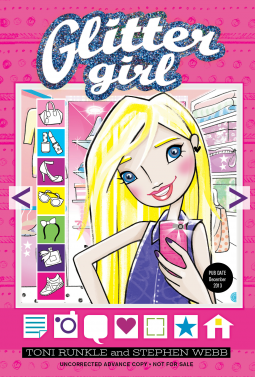 BLURB from Goodreads
True Confessions of a TrendsetterHi! I'm Kat. Welcome to my blog. I may be from a small town but I'm also Glitter Girl Cosmetics' newest trendsetter. Thanks to my flair for fashion and my popular style blog, I've been chosen to be an Alpha Girl, which means I get to try out all the Glitter Girl products before they hit the stores.Forty-eight hours after she blogs about the goodies in the new line, every girl at Kat's school is sporting the gear. Kat's popularity skyrockets, but Jules--Kat's BFF--seems to be the only one who's not buying into the Glitter Girl lifestyle. Is Kat willing to sacrifice her friendship for life in the fab lane?

INITIAL THOUGHTS
Approaching this book I'm not totally expecting to "enjoy" it as such as it is aimed at young teens. Though I read a lot of YA I don't tend to read much younger aimed stuff. However having been approached by the publishers I decided to give this one a go. So I am approaching this one as a mother reading it with perhaps a view to would I purchase it for a young relative? and also the angle of would I have enjoyed it at the appropriate age?

MY REVIEW
So I received an e-copy of this book from the publishers via Netgalley in exchange for my honest review. The cover is very Glitzy and Glam as well as having a Social Media look and feel to it. Would the cover make me pick it up from a bookstore shelf?Yes if I was looking for a gift for a young teen I would definitely take a look at it?
So the story is that a young director, Chelsea, of a large teen cosmetics company Remoulet is pitching a brand new way of marketing the new "it brand". Her idea is that 50 girls are chosen to be Alpha Girls, these girls will all hold a slumber party inviting 20 friends in their own area. At the slumber party the new products will be unveiled and the girls get to review them. The girls also get free products to keep for themselves and a "goody bag" upon leaving the party.
The main character is one of the girls chosen to be an Alpha Girl called Kat Connors. Kat loves new styles, outfits and products and loves keeping her online diary blog. Her diary blog is already popular which is one of the reasons she is chosen as an Alpha Girl. Kat's best friend since she was very small is called Jules. Jules is the exact opposite of an Alpha Girl, she prefers to wear t-shirts that are about a cause. She's a more no-frills/no makeup kind of girl. So when the fantastic Slumber Party special tickets are being handed Kat hesitates as to whether to give one to Jules or not. The tickets are extra special in a hot pink colour studded with rhinestones. Suddenly the once moderately popular Kat is the centre of attention. All the girls want to be invited to her party.
Also after the great slumber parties one of the Alpha Girls will be chosen as the Face of Glitter Girl, a great opportunity. Naturally Kat would love it to be her. The grand announcement date is set and it clashes directly with Jules' fourteenth birthday party which is going to be at an Annual Faire and all the guests get to dress up in medieval costumes. It's so Jules, though Kat is not into the whole medieval and shakespearean theme.
So Kat has to make a choice attend the Glitter Girl Grand party or go to her friend Jules Birthday Party. Will she make the right choice? What I have said is just a light taste of the story within this book, much much more happens.
I thought the book was really good, I think there's a moral in there for the teens to discover and learn from too. The book contains the "in" and "out" crowds and all the politics that that entails, the bitchiness "the populars" vs the "not so populars". The book also tells the story of a friendship that is going through the trials and tribulations of teenagers.
So did I enjoy the book? Yes from a persons point of view to buy for a young teen as a gift.
Would I recommend to teens? Yes to the younger ones in fact I'd say from 8 years up really.
Do I think the language and content of the book is age appropriate? Yes, I feel it will appeal to the "tween" market the most .(though they probably hate being considered "tweens")The fact it feature social media and how it can work both for the positive and negative is also very current and a modern day dilemma our "tweens" and "teens" and even adults are facing on a daily basis.

GIVEAWAY
This Giveaway is US/Can only (sorry!)
Please simply leave a comment including your email address (so I can inform you if you win!) and tell me who you would like the book for in the comments section.

There’s a saying about writing. “Write what you know”. We don’t know who made it up. But after a couple of decades of writing, we couldn’t agree more.
Even if you’re writing something fantastical, futuristic, or completely out of this world, it has to be rooted in reality. You, as a writer, have to believe the characters, how they behave, how they talk. Otherwise the readers won’t buy it. They’ll sniff out the phoniness in a second and put the book down. Middle Grade readers are especially astute.  After a dozen pages or so, if they aren’t buying the story, they’ll lose interest, and most likely not make it to the end of the book.
And this is part of the reason we love writing for the middle grade group. They are smart, clever, discerning and have absolutely no problem calling “baloney” on something.  You’d think that would scare a writer away. Just the opposite. As a writer, that’s what you want in a reader. Someone who pushes you to do your absolute best. To not be lazy with your writing. To find and fix the holes in your plot and your characters’ behavior so that they are rock solid and believable. Because then you end up with a good, enduring story.
But we didn’t choose to write for the MG age group only because we wanted a discerning audience that would challenge us. That was a fortunate byproduct of the initial reason we began writing for this age group.
We started because of our own kids. We used to write screenplays. We did that for many years, in fact. Then we both became parents (we’re both parents of daughters). And you know what parents  do? They read aloud to their kids. Even in a world populated by WiFi and touchscreens, there still is no replacement for the good old bedtime story. And then when their kids get big enough to read on their own, parents pre-read books to make sure that the content is appropriate for them.
Well, lo and behold, we found ourselves unable to put those books down! There is so much good YA fiction stuff out there. In fact, a lot of it is better than adult fiction. We found ourselves so entranced by these books that we decided we really wanted to try writing one.
Also, we loved the idea that we would write something our kids could read and be proud of!  It always amazes us that so many writers look down on lit for young readers as if it’s a lesser form of art. But if you think about it, a well-written book for young people has much more potential to touch lives than even the most successful “serious” novelist will. Roald Dahl and E.B. White are much more a part of our psyches than Philip Roth or Thomas Pynchon could ever hope to be.
We knew when we started coming up with ideas that we had to start from that adage we mentioned earlier “write what you know”.  And the fact that we had young daughters was a perfect jumping off point. We had seen our girls deal with the growing pains that come during that transition period into adolescence.
It’s a tough time for middle schoolers. There are lots of insecurities as they try to figure out who they are and where they belong.  Friendships shift and mutate as kids discover themselves. Add to that the emergence of the whole mean girl mentality that starts about 6th grade and goes on into middle school and there is a lot of material out there for stories. But we didn’t want it to be a standard tale that readers have seen many times before.
Then one day we saw this news program that talked about how some advertising companies where secretly following the activities of kids (specifically girls) and targeting them in their ad campaigns.  As parents we thought that was pretty reprehensible. As writers, we realized it was a good idea for a book.   And thus the idea for Glitter Girl was born. As we were thinking about and writing the novel, it became apparent to us that while the world of the modern middle schooler is fraught with more snares and traps than our world may have been, there are still some timeless truths that readers of every age can recognize in the story. And that became our prime directive as we set about creating the story. Although we were writing about young teens, we wanted the story to appeal to all readers. If we have done that with Glitter Girl, we feel like we’ve accomplished something indeed.
Posted by Jeanz xx at 03:00