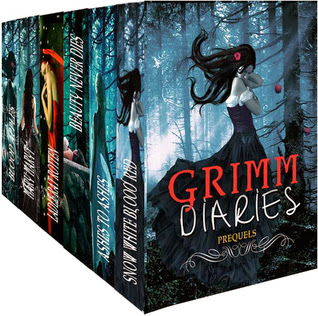 
BLURB from Goodreads
What if all you knew about fairy tales was wrong?Warning: these Grimm Prequels are like snap shots of a magical land you're about to visit soon. I like to think of them as poisoned apples. Once you taste them, you will never see fairy tales in the same light again.This Grimm Diaries Prequels are a number of short books in the form of epistolary diary entries. The diaries are more of teasers for the upcoming series: The Grimm Diaries, allowing you to get a glimpse of what to expect of the series. The 6 diaries are told by The Evil Queen, Peter Pan, Little Red Riding Hood, the Devil, Prince Charming, and Alice Grimm The first book in the Series will be out in February 2013, called SNOW WHITE SORROW.Series Description:The Grimm Diaries are pages written in a Book of Sand, where each fairy tale character confessed the true stories once altered by the Brothers Grimm two centuries ago. To keep the truth about fairy tales hidden, the Brothers Grimm buried the characters in their dreams to never wake up again. But the curse is broken now, and the characters are allowed to wake up every one hundred years. They intend to tell the truth about really happened, and about an untold cosmic conflict between fairy tale characters.List of the available Grimm Diaries Prequels:1.   Snow White Blood Rednarrated by The Snow White Queenamazon.com/dp/B0087HI44W2.   Ashes to Ashes and Cinder to Cindernarrated by Alice Grimmamazon.com/dp/B0087H2KY23.   Beauty Never Diesnarrated by Peter Panamazon.com/dp/B008DJBA224.   Ladle Rotten Rat Hutnarrated by Little Red Riding Hoodamazon.com/dp/B008NWZFZ25.   Mary Mary Quite Contraryamazon.com/dp/B009AZM6GC6.   Blood Applesnarrated by Prince Charming7.   Jawiginarrated by Sandman Grimm

MY REVIEW
INITIAL THOUGHS
So I honestly didn't have the time to sit and read the whole set of prequels, even though they are quite short but I decided as I had been curious about these books for some time that I would at least read the first prequel . . .
Here is my review . . .
1.   Snow White Blood Red
narrated by The Snow White Queen
amazon.com/dp/B0087HI44W

MY REVIEW
This book is told from the point of view of the Queen, or the wicked Queen as we have come to think of her from the tales we have previously read. In this depiction of Snow White, Blood Red the Queen is actually the "good guy" in the story trying to love the monster her darling beautiful daughter has grown into. In fact the Queen is trying to protect the rest of the court and visiting Royalty from Snow White. Snow White has a taste and fascination for blood, the look, the feel and the taste! Yes, Snow White is a Vampire!
I liked the conversational style of the prequel and it certainly made me want to read much more of that tale. I found it quirky and fun to read and I thought it really good how the original tale is turned on its head and its actually Snow White who is the dangerous one whilst having the Queen as the poor misunderstood good one!
Did I enjoy the Prequel? Yes I really did enjoy what I have read.I have actually started reading Ashes to Ashes and Cinder to Cinder and I am enjoying that one too. I will continue to read these Prequels. Would I recommend the Prequels?  Yes, these are the type of reading that can be dipped in ad out of. That's what I intend to do as I also have some booked in reading and reviewing to do. Would I want to read more of the Prequels? Yes as I have already said I would like to read the rest of the Prequels in time, dipping in and out of them. Would I want to go on and read more of the tales? Yes in time I think I will read the other Prequels. Would I read other books by Cameron Jace? I would certainly take a close look at anything written by Cameron Jace!

CAMERON JACE'S
TOP TEN FAIRY TALES
In reverse order here are Cameron Jace's very own favourite fairy tale's! and the reasons why they are the favourites.

In 10th Place:  The Devil and the Three Golden Hairs
Some readers email me and ask me why I have the devil as a character in the Grimm Diaries. Others ask me why he is so funny. To answer both questions, just read this fairy tale

In 9th Place:  The Day Boy and the Night Girl by George McDonald
A few people now about this. Do yourself a favor and read it. George was a personal friend of Lewis Carroll so the imagination is overboard. It could have been my first favorite really if it had the punch I look for in the ending.

In 8th Place:  Sleeping Beauty
The original one is horrifying if you read it. but always enchants me is the idea of a dead girl awakened by a kiss. there is something so much creepy and lovely about it.

In 7th Place:   Beauty and the Beast
What is beauty and what is beast? wow. I can talk about this for days.

In 6th Place:  The Six Swans
It's epic and the Swan is a lovely creature. (not really, it can kill you, research lol)

So we are at the halfway point! Lets find out which fairy tales make the top five!

In 5th Place: Ugly Duckling
I noticed slightly insecure kids love it immensely, so I do , too :)

In 4th Place:  The Snow Queen
The idea that the girl and the boy are friends and not lovers, and that she goes to search for him is enchanting, not to mention the splintered glasses.

In 3rd Place:  The Man Who Became Rich Through A Dream
this is the inspiration to Paulo Coelho's The Alchemist. A very interesting life lesson

In 2nd Place:   East of the Sun and West of the Moon
It's creepy but has a punch in the end that I like. I've always likes stories with brilliant endings.

And in the top spot on Number 1:   The Buried Moon
My all times favorite by Hans Christian. It's such unique and expands all realms of imagination.

So do you agree with Cameron Jace?
Or has Cameron missed out YOUR favourite fairytale?
I have to admit to not even having heard of some of the fairy tale's in this list.
Though one a lot of people don't seem to know that I love and Cameron has at 4th Place is The Snow Queen,I remember having a large hardbacked book full of fairy tales and it had that one at the very end and yes it's one of my top ten.
Share your favourites and why in the comments below!

(THIS TOUR WAS ORGANISED BY GOOD CHOICE READING)