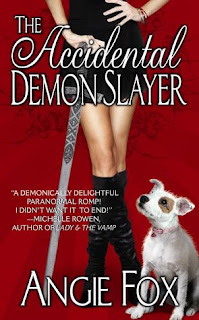 
Newly anointed with demon-fighting powers and suddenly able to hear the thoughts of her hilarious Jack Russell terrier, a preschool teacher finds a whole new world of dark and dangerous, including a sexy shape-shifting griffin she's not entirely sure she can trust. 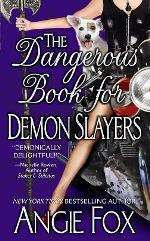 
Demon slaying powers should come with an instruction book ....


Seriously. Why does a new hair dryer have a twelve-page how-to manual, but when it comes to ancient demon-fighting hocus-pocus, my biker witch granny gives me just half a dozen switch stars and a rah-rah speech? Oh, and a talking terrier, but that's another story. It's not like my job as a preschool teacher prepared me for this kind of thing.
So I've decided to write my own manual, The Dangerous Book for Demon Slayers, because no one tells me anything. Dimitri, my "protector," may be one stud of a shape-shifting griffin, but he always thinks he can handle everything by himself. Only he's no match for the soul-stealing succubi taking over Las Vegas. If I can't figure out how to save him - and Sin City - there'll be hell to pay.

BLURB from Goodreads
Last month, I was a single preschool teacher whose greatest thrill consisted of color-coding my lesson plans. That was before I learned I was a slayer. Now, it s up to me to face curse-hurling imps, vengeful demons, and any other supernatural uglies that crop up. And, to top it off, a hunk of a shape-shifting griffin has invited me to Greece to meet his family.
But it s not all sun, sand, and ouzo. Someone has created a dark-magic version of me with my powers and my knowledge and it wants to kill me and everyone I know. Of course, this evil twin doesn t have Grandma s gang of biker witches, a talking Jack Russell terrier, or an eccentric necromancer on its side. In the ultimate showdown for survival, may the best demon slayer win.

BLURB from Goodreads
Lizzie Brown would like to have one normal date. Instead, she gets a towering inferno with a message: her long-lost dad is a fallen angel in danger of becoming a demon. Not good. Especially since she’s a demon slayer.

Her grandma advises her to stay out of it. Her sexy-as-sin shape-shifter boyfriend would much rather she devote her attention to more carnal pursuits. And her dog’s one demand is for more bacon. After all, he can’t train his pet dragon on an empty stomach.

But Lizzie knows there’s no other choice but to hop on her Harley and help her dad—even if the search for the truth brings a bad-boy slayer back into her life and leads her into the middle of a war to end all wars. 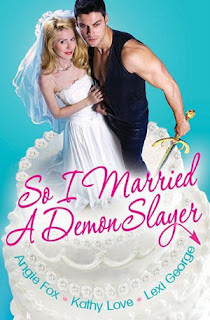 In the lusty humidity of the Deep South, among the neon lights of Vegas, and the glitz of high-fashion, demon slayers are the new sexy...

Hot! By Kathy Love
At Hot! Magazine, the devil really does wear Prada. When the CEO is an actual demon and the mail room guys are undercover demon slayers, it's not beyond the realm of possibility for an up-and-coming photographer and a model possessed by much more than a sweet tooth to fall in love.

What Slays In Vegas by Angie Fox
When a sexy succubus comes up against a fearless demon slayer intent on killing her boss, a truly wild Vegas night turns into a quickie wedding. But in a city where anything goes, a demon slayer wedding a succubus is strictly forbidden. Which doesn't mean either is rushing to jump out of the marriage bed.

The Bride Wore Demon Dust by Lexi George
He's perfection in a tuxedo—more so out of it—and on a mission to protect his Alabama gal from the mysterious mayhem intent on her destruction. But the bride is a spunky steel magnolia with special powers of her own, determined to drop-kick evil forces across the state line and give her slayer a run for his money.