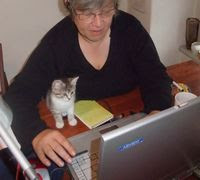 How long have you been writing?
Forever. My parents tell me I used to make up poems before I could read and write.

So you started as a poet?
I was first published as a poet. I was thirteen when I first appeared in a published anthology and I suppose that is how I saw myself. I had quite a bit of success when I was a youngster - I was in the Grandchildren of Albion anthology. But I always wrote stories and even my poetry had a narrative.

But then you stopped writing?
I stopped seeking publication. Poetry would never pay enough to live on and I was starting a career in the arts - I ran the national centre for puppetry for a while. Then my son arrived and I was juggling motherhood and career and somehow there wasn't time for the writing. So many women will know how that feels. I regretted it of course and I kept on writing in my head.

So what happened? Why did you start to write again and why write novels instead of poetry?
Who says I don't write poetry? Basically what happened is the writer/poet in me fought back. I had moved into working with disadvantaged people about twenty years ago. It was emotionally hard work but very rewarding. But it took its toll and a few years ago I realised that I couldn't continue. I needed to start writing again. I have always used writing as a way of working through things, of understanding and dealing with the world. A sort of personal therapy.

So the central character is you?
No. I'm not in the book very much at all. What I meant was that in my career I have listened to so many brave women (and men and children), to their stories of the terrible things that happened to them and of their survival.

Such as?
Oh, asylum seekers, the homeless, abused women, people whose lives have been broken, women like Judith. I have never had their experiences and I suppose the only way I could start understanding was to work it through using my imagination. Not that Judith is any one woman, she isn't, her story is her own, it's fiction. When I had to stop working in a practical way with disadvantaged people, I thought I'd walk away. I decided I'd write a children's novel, based on a play I'd written when I was younger. Nothing too taxing.

So what happened?
I was lucky to have a very close friend, Hannah Kodicek, who was encouraging me to write. She was a professional story editor in the film industry and lectured on the subject as part of a European programme. She loved my poetry and saw that I needed to let that side of my personality out again. When I finished the first book I asked her to read it.

And what did she think?
Hannah's way of critiquing was not to criticise, it was not even to say what was wrong or right. Basically she asked lots of questions. "Such as what are the Shadows?" I hadn't really worked it out. And "Who is this female character? Why have you drawn her so badly?" When I thought about it, I realised that I was fascinated by the female healer/witch. And so I wrote a second novel, still for children, with Judith as the main character. Hannah's reaction was "Are you sure this is a children's novel?" All the time I was learning the craft. Hannah lent me Joseph Campbell's The Hero's Journey, a copy of Women Who Run With Wolves by Clarissa Pinkola Estes and her own notes on story structure and tools. By the time I wrote another novel, Mother of Wolves, Hannah told me that there was little more she could teach me, which was untrue. You can always learn from a good reader.

Has Hannah read this book?
No, she died of cancer in April 2011. But I talked to her about it, I was writing it when she was ill. She knew that at last I was writing the adult book I had avoided and I promised her that I would publish it. I owe it to her and to all those women whose stories have influenced me.

And is there more to come? What happens to Judith and Sarah after Elma's death?
There is a second Judith novel: Love of Shadows. And there's Mother of Wolves, which is not about Judith. When I was a teenager I was lucky to have an inspirational poetry teacher, who was always talking about the parable of the talents and how it was a sin to neglect the talents we are given. I think I've been guilty of that sin and I'm trying to make up for it now.
Posted by Jeanz xx at 10:00