We have chosen the following excerpts to give your readers a glimpse into the lives of the main characters in Pledged, namely: Seth and Erin, Jared and Sophia, and Caleb and Talitha.

Despite the heat, Seth felt icy. Dread could do that to him. Or so he had recently discovered. Deep breathing usually calmed him, so he sucked in a lungful of desert air and told himself to relax. It didn’t help. By the time he’d walked from the aircraft to the immigration hall he’d ripped off a jagged piece of thumbnail, already bitten raw. He handed his US passport to the Botswanan border official, and, after a frown, and a stamp, he joined the crowd at the baggage carousel. Botswana in southern Africa was the last place on earth he’d ever have picked for a holiday destination. But he wasn’t here on holiday. Not even close.
His backpack was slow in coming. Tired from his long-haul flight from New York, he leaned against the wall and closed his eyes. Almost as if to mock him, the hated vision that had brought him to Botswana burst into his mind. In an instant he was back in ancient times, watching a man he knew only as Gideon. As usual, Gideon was huddled on a windswept hill with his band of hopeless soldiers, waiting to be slaughtered by a huge army gathered in the valley below.
Seth snapped his eyes open to stop the battle from waging in his mind. It wasn’t that he was particularly squeamish; he’d watched enough movies to iron clad his stomach against gory visuals. But no movie had ever left him icy with dread the way Gideon’s battle did. And the reason for that was simple. The moment the visions had started, he had known that the war, fought so long ago in a place he’d never heard of, was far from over. And, as reluctant as he was, he too was being enlisted to fight in a cause he didn’t understand or want.
He forced himself to focus on the present: Erin, who waited for him in the arrivals hall; his brother Kyle, whom he’d come to Botswana to visit; Kyle’s expedition to find the Lost City of the Kalahari . . .
He ripped off another piece of fingernail. Thinking about the search for the Lost City was almost as bad as the war-vision. I hope Kyle never finds the damned place. He slapped his hand on his thigh. Enough! Grabbing his backpack off the carousel, he set his face into a smile and strode into the arrivals hall.
The first hurdle was finding Erin. She was due to arrive an hour earlier on a flight from Cape Town in South Africa, one of Botswana’s neighbours. He’d never met her, although they had spoken over the phone once. Then she’d described herself as “a short, seventeen-year-old (a year younger than him) with a mass of ginger hair.” She’d sounded nice. Meeting her was the one ray of brightness in this otherwise dark picture.
He stopped to scan the crowd. A petite girl with shoulder length, reddish-blonde curls, dressed in skinny jeans and a purple blouse, immediately caught his eye. It had to be Erin. Nice legs. What’s it with girls that they always under-sell themselves? He studied her face with his artist’s eye. Vermeer would’ve killed to paint her. Suddenly wishing he didn’t look so grimy after his three plane-changes, he walked over to join her. “Hi, I’m Seth. You’ve got to be Erin. My brother’s just married your sister Izzy.”
“And after only knowing each other for about a week.”
Her dimpled grin was infectious, making him crack his trademark crooked smile. “Madness.”
“Mysterious.” Erin cocked her head to one side, seemingly appraising him. He knew he had been accurate when he’d told her he was tall and dark-haired. But what he had failed to mention was what girls had often said they liked about him: his strong, angular face, softened by expressive brown eyes. He watched her eyes rove over his grey Muse: Resistance t-shirt, taking in his broad shoulders and chest. From there they darted down his black camo-pants to his boots. Amused by her blatant assessment, he cocked his head to one side, watching her. Suddenly Erin giggled – was she embarrassed? – and picked up her bag.
“We’ve yet another plane to catch. My fourth in the last twenty-four hours,” Seth said, hoping to explain away his rumpled appearance. “To a place called Maun.”
“So we do. Let the adventure begin.”

Jared nodded at Sophia and Kezeah without any sign of recognition. With two of his Pledged up front and two at their rear, he marched them down the corridor to a flight of stairs. Once at the bottom, he ducked beneath an archway, opening onto to a gloomy, narrow tunnel. Erin, never keen on dark, claustrophobic spaces, took a deep breath and paused.
“C’mon,” Seth said. “The sooner we walk through it, the quicker we get to the other side.”
“What happens if what’s on the other side is even worse?”
“Then you’ll know for sure that the dead guys are leading this expedition,” Seth said, wanting to deny the painful burning in his heart that reconnected him with a cursed Jared. He grabbed Erin’s arm and pulled her into the passage.
They’d taken no more than two tentative steps along the uneven floor when Sophia stopped. “Commander, I am not walking through this snake-hole!”
Jared turned back to look at her. With none of the fear or diffidence Erin and Seth expected from a boy with limited to exposure to girls – especially beautiful ones – he answered, “Of course, my lady. You’re from Norin, where I understand you live in grass huts.” He gave a sardonic smile. “But don’t despair, you’ll soon get used to bricks. Even our own Outcasts have learnt not to flinch at the sight of them.” He continued down the passage.
Seth’s mouth dropped at Jared’s rudeness; this was so foreign to the Jared he had seen just moments ago in his vision. It just added to his anger at Reuel’s Curse.
The Pledged at Sophia’s rear prodded her back; she gave him a fierce look and started walking.
For Seth and Sophia, both taller than Erin and Kezeah, negotiating the tortuous twists and turns of the tunnel was no easy matter. Stooping, cursing each time they bumped their heads on the rough ceiling, they struggled after Jared, but he kept up the merciless pace until they reached a dark staircase.
Her temper now as short as her breath, Sophia stopped walking and locked her arms across her chest. “Having just cracked my skull open, you now expect me to scramble up those treacherous stairs too. No doubt hoping I’ll fall and break my neck. Well, forget it. I’m not moving.”
“Sophia!” Kezeah whispered, jabbing her in the ribs as she stepped gingerly onto the first narrow step.
Sophia ignored her. “Only savages and rats live in places like this.”
Jared’s eyes narrowed. “Savages and rats, you say, my lady?”
Sophia set her face into a cold stare, locking her hypnotic blue eyes on his.
He surprised her by holding her gaze. “I hate to disappoint you, my lady, but Lord Rustus, Lord of the Household, under the direction of the Overlord himself, has chosen your apartment. Surely you don’t question their judgment in this matter?”
“As a matter of fact, I do.”
“In that case, I’ll gladly pass on your concerns. If that’s what you really want.”
“Enough, Sophia. This isn’t a fight you can win.” Sophia’s Guardian had joined them.
***

EXCERPT THREE: Meet Caleb and Talitha . . .
Erin flicked her hair behind her ear and watched Caleb straighten his clothing. He took a deep breath and entered the hut. They followed right after him, drifting through the closed door as if it didn’t exist. Seth laughed, holding his hand up to Erin for a high-five  – until he noticed that Caleb’s Gefallen had also wafted into the cabin with them. Even though he had no idea how to defend Erin from a ghost, he stepped in front of her to protect her. But the wraith ignored them and sailed over to Caleb.
A tall, blonde-haired girl with almond-shaped brown eyes was waiting for Caleb. For Erin, the recognition was instantaneous; it was Talitha. “She’s so beautiful!”
“She’s okay,” Seth replied, looking her over critically. “But I don’t think Caleb’s here for her looks.”
“What’s that supposed to mean?”
“You said yourself that Caleb’s a good-looking guy. I bet he could have any girl he wants around here.”
Erin frowned; then she smiled as understanding dawned. “So, in guy-talk, you’re saying he loves her?”
Seth chuckled as he picked up Erin’s hand and put it on his heart. “Tell me what you’re feeling?”
Erin gasped at a disconcerting pulse thrumming in Seth’s chest, over-riding his own heartbeat. “It’s . . . no . . . It’s not possible.”
“I’ll bet it is. It’s Caleb’s heart beating.”
“How do you know it’s him? It could be Talitha.”
“It started the moment I saw him. It’s like it’s there to stop me denying that he and I were once friends. And I was watching Talitha when he walked in. She smiled, and it felt as if someone had just shot a thousand volts through him.”
“It’s amazing you’re so connected that you can feel him.”
Seth wasn’t so sure he agreed; it made being here just a little too real.
Erin felt her own heart and could faintly discern Talitha’s heartbeat; it was nowhere near as strong as the thump in Seth’s chest, but then, she figured, she wasn’t in denial the way he was.
They fell into silence as Caleb opened his arms to embrace Talitha. She draped her arms around his neck, twisting the dark curls tumbling onto his shoulders. He kissed the nape of her throat and ran his lips up her neck, over her chin to her mouth.
“This is awkward,” Erin murmured, looking away.
“You don’t say. All this way just to watch them making out.” 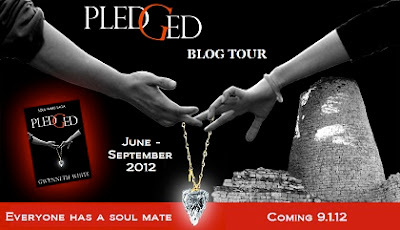