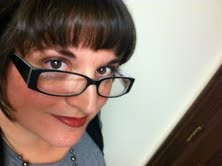 When did you first consider yourself a writer?
I probably should've started considering myself a writer even before I finished my first manuscript. But I don't think it really hit me that I could call myself a writer until I was a finalist in a contest for the first time (Fire and Ice, 2010). That was the validation I’d been looking for, the encouragement I needed to keep going. By that point, I'd completed four manuscripts in two years and was getting ready to start shopping RED to agents. I realized I had to believe that I was a career writer and take myself seriously if I was going to ask an agent or editor to do the same.

How long does it take you to write a book, from the original idea to finishing writing it?
About six months. I usually complete the first draft in four months or so and then spend about a month editing. Then I send it to my agent who typically offers more editorial input before I send the manuscript to my editor. RED was an anomaly in that total writing time was only four months.

What can we expect from you in the future?
The next book in the Transplanted Tales series, THE BETTER TO SEE YOU, is scheduled for release in February 2013. I'm writing the third book in the series now. In addition to the Transplanted Tales series, I have a couple of other projects in development, so I hope to be able to share those with readers at some point! One project is a paranormal romance series and the other is a futuristic romance.

Do you choose a title first, or write the book then choose the title?
I come up with a working title during my preliminary planning for the book. The title usually changes at some point, though, either during the writing process or at the request of my agent or editor, so I try not to get too attached to it! Of all the manuscript I've written, RED is the only one that's had the same title from start to finish.

Do you decide on character traits before writing the whole book or as you go along?
I spend a lot of time coming up with dossiers for even the most minor characters before I start writing. Honestly, a lot of the information doesn't make it into the story (types of music they listen to, what they wear, what kind of cars they drive, etc.), but it helps me develop their personalities.

Have you ever suffered from "writer's block"? What did you do to get past the "block"?
Absolutely! I tend to hit a wall with every manuscript about two-thirds of the way in. It's incredibly frustrating! The best solution I've found is to keep writing. Whatever comes out on the page is pretty much crap, but that's what editing is for. The most important thing is to keep the momentum going and the story moving forward. If you give into the block, you're in real trouble.

Did you have a favourite author as a child?
One of my favorites in my pre-teen years was a Canadian author named L.M. Montgomery. She's best known for her Anne of Green Gables series, but I actually discovered her when someone gave me the Emily of New Moon series as a gift. They're fabulous stories!
As I hit my teen years, I started reading a lot of fantasy and loved authors like Lucy Cullyford Babbitt and Tamora Pierce. But I was also going through historical romances as quickly as I could get them. The librarians knew me very well!

Are there any New Authors you're interested in and we should watch out for? and Why should we watch out for them?
There are loads of new authors who sound exciting to me! A few I'd keep my eye on are Amanda Carlson, Julie Ann Walker, Cecy Robson, Kait Ballenger, and Jen J. Danna. A have a feeling big things are in store for all of them! And although I usually read urban fantasy/paranormal romance/romantic suspense, I'm also really excited to read Amanda Flower's new Amish mystery series, which is getting rave reviews!
(Amanda Carlson has been a guest on my blog a couple of times! I will watch out for the other Authors. I love finding new authors)

What piece of advice would you give to a new writer?
It’s sometimes hard to keep going and not let the repeated rejection get you down, but be gracious, be professional, and be persistent.

Thank you for taking the time to take part in an Interview for my blog!
Thanks so much for having me by for a visit! This has been a lot of fun! :)
Posted by Jeanz xx at 13:30