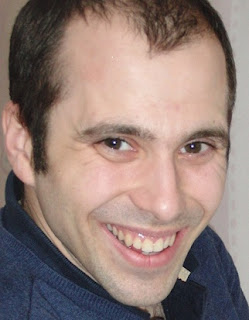 What is your name, where were you born and where do you live now?
My name is Jacob Prytherch, I was born in Chesterfield (not Wales as my unpronouncable name might suggest) and I now live in Birmingham with my wife and two daughters.

Do you or would you ever use a pen name?
I really should, but for some reason I'm too attached to my own. I do sometimes tell people who ask that's it's pronounced "Smith".

What is the name of your latest book, and if you had to summarise it in less than 20 words what would you say?
It's called The Binary Man and I would describe it as "One man's battle with his own nature, a dystopian science fiction tale with elements of mystery, 50's pulp and horror." 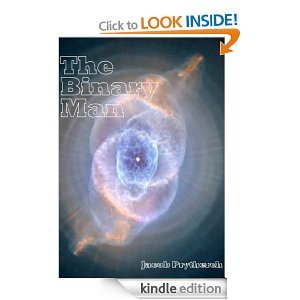 BLURB from Goodreads
In a world of advancing science, is there any place for magic?Yannick Meyer's life seemed locked in a downward spiral of ill health and worse luck, when a knock at the door changed everything. Offworld opportunity beckoned, a release from the rampant pollution and social decay of Earth, or so he thought. But the bright lights of Washington station hide their own shadows. Caught between two warring corporations he is forced to confront his own nature, and the power that he can exert on his world. But can he control it, or will it consume him and everything he holds dear?Set in the near future, The Binary Man is the story of the first true magician.

How long have you been writing?, and who or what inspired you to write?
I've been writing since I was around seven, at least that's the earliest I can remember. I think I was trying to write a "choose your own adventure" book, which starred a boy and girl loosely based on me and my sister entering a strange Tolkien-esque world. I never finished it. I was inspired to write by having the Lord of the Rings read to me at bed time by a very patient mother. It took about about four years, but that nightly escape made me realise how important storytelling is.

Did you have a favourite author as a child?
Ray Bradbury. I read and re-read his short stories constantly. I especially liked the creepier tales such as The Small Assassin.

What is your favourite book and Why? Have you read it more than once?
It would probably be Neuromancer by William Gibson. The of foreshadowing of how the internet will rule our lives in that story is amazing. The idea that our streets will be dumping ground for fax paper is slightly less on the money. I've read it three or four times, but try not to read it too much so I don't spoil it.

Do you think ebooks will ever totally replace printed books?
I used to think they wouldn't but with the pace things are switching over I'm afraid they will. I still prefer reading paper, but if the change comes we'll just have to accept it. It's small consolation I know but there will at least be a lot less of an environmental impact from the paper industry.

Have you ever suffered from a "writer's block"? What did you do to get past the "block"?
I used to get bogged down by reworking every little detail before moving on, which meant I had very little to work with after a long time. I just try and force myself to write now, even if I feel it's not my best, I can pick it up when I go through the draft afterwards. I also skip ahead if I feel a bit stuck and do a bit of the narrative I'm sure of, then I can just go back and fill in the blanks.

Would you ever ask a reviewer to change their review if it was not all positive about your book/books?
No, it defeats the object of asking other people for their opinion. It's all subjective anyway, my opinion has no more validity than theirs.

Do you have plans for a new book? Is this book part of a series?
I'm currently writing a book tentatively titled "Heal The Sick, Raise The Dead". It doesn't run on from the Binary Man at all and is more of a slow burning horror. I don't like to revisit old areas, there are so many different things to write about!

Do you gift books to readers to do reviews?
Certainly, all they have to do is ask! My first book is not a money making venture, I just want to use the experience to improve and feedback is vital to that.

People can contact me or keep up to date with my work at
www.jakeprytherch.blogspot.com
(I will gladly gift books out to anyone who wishes to review it.)