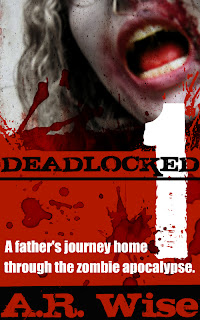 EXCERPT: (From Chapter 1 of Deadlocked)

“What hospital are they at?” asked Jerry. He was supposed to be managing the floor, but he had no interest in telling people to get back to work on a day like this.

“A bus full of kids just showed up." Gloria clasped her hand over her mouth. “This is horrible.”

“Has anyone died?” asked Jerry.

“Not yet,” said Alan, one of the company’s accountants.

“How many kids are sick?” Jerry pushed his way past the others to get a better view of Barry's screen.

“They didn’t say. They’re taking the camera over to the bus now,” said Barry.

Everyone silenced and I could hear the reporter telling the viewers he was going to get on the bus. After a few moments of rustling, which I assumed was the reporter’s microphone rubbing against his coat, he asked, “What happened here? Are these kids okay?”

“Oh my God,” said Gloria. “How terrible. Look at them, the poor babies.”

Then the screaming started. Everyone in Barry’s cubicle jumped and caused the walls to shake as people pressed against them. Barry’s speakers crackled with the shrieks of children.

My daughters are three and five, so I was studied in the various screeches a child can make, and these were a mix of pain and terror. The pained screams weren’t the sort that came from a stubbed toe or skinned knee. These were a violent expulsion of every ounce of breath and energy the child could muster. I can still remember the sound that came from that speaker as if it were happening now. It was horrific.

I couldn’t ignore this event anymore. I got up and peered over the divider.

Barry turned off his monitor, but the sound continued to wail through his speakers. He scurried to turn them off and eventually had to rip them away from his desk. The cord whipped out from behind his computer tower. He held the speakers and stared up at me, his face drained of color and his eyes wide and unblinking.

Jerry had his hands on his head and sounded like he was going to hyperventilate as he stumbled through the crowd and fell back against the wall outside the cubicle. James and Marcia announced they were going home and Jerry just nodded his acceptance.  Work was officially over.

“What happened?” I asked again as I went out into the hall.

Gloria came out of Barry’s cubicle and steadied herself against the threshold. “They were killing each other.”

“The kids…” she couldn’t continue.

“They didn’t just kill each other,” said Barry. “They were eating each other.”

All the following are Available at Amazon.co.uk

All the titles below are available from Amazon.co.uk
Deadlocked : Broken Pieces vol 1