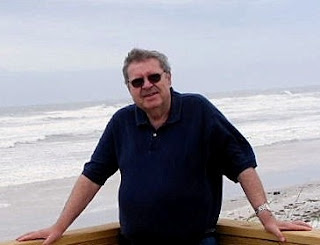 What is your name, where were you born and where do you live now?
I’m Alan Felyk. The last name is pronounced “Fell-ick,” and I’ve learned to answer to anything that sounds similar.
I was born in St. Paul, Minnesota, were I lived for 7 years. I lived in Colorado for the next 54 years until I moved to Florida in 2012. Except for that 54-year thing, I guess I’m a nomad.

When did you first consider yourself as a "writer"?
I started writing short stories when I was about 10. I even sent one to a magazine in an attempt to get it published. And if you think you don’t understand publishers, you really don’t at that age. It was a nonfiction publication. I was surprised the manuscript was rejected and returned to me.

What is the name of your latest book, and if you had to summarise it in less than 20 words what would you say?
My book is entitled Damaged Right Out Of The Box. It’s a sometimes humorous, sometimes wistful memoir . . .  an ordinary life that was often blended with the improbable.

Who is your publisher? Or do you self publish?
I queried less than a dozen literary agents before I chose the self-publishing route. During that time, I read stories about how the traditional publishing process can take years before a book reaches the public. And, even after all of that, most traditional books don’t sell many copies. Being a first-time author at age 61, I figured I didn’t have time nor the patience for that. I’ve always had the fear that after I die, the book will take off and rocket to the top of the New York Times bestsellers’ list. All right, maybe that won’t happen, but I’m going to kick the bucket with that notion.

How long have you been writing? And who or what inspired you to write?
My writing career actually began at the University of Colorado when I decided to pursue a degree in news-editorial journalism. I wanted to be a creative writer, but I knew that wouldn’t pay the bills. Of course, I wrongly assumed that newspapermen make enough money to live on. In any event, I started writing for one of the school newspapers. After college, I became a full-time journalist, and writing newspaper feature stories became my creative outlet.
The writing “bug” really took hold when I was 17 when Miss Bronson, one of my high school English teachers, laughed out loud in class over a television show parody I had written. It was a takeoff on Rowan and Martin’s Laugh-In, and I used my teacher and high school administrators in the roles made popular in the show. Miss Bronson was cast as the ditzy Goldie Hawn character. I knew I had taken a big chance poking fun at her. But, she had encouraged all of us to challenge ourselves with our writing. She shared the piece with the rest of my class, and everybody else thought it was funny as well. So, from that point forward, I tried inject humor in whatever I wrote whenever I could.

Do you have anybody read your books and give you reviews before you officially release them?
I do. I send them to a small group of friends and hope they’ll find my mistakes. They found a bunch, but I know some errors still exist in the book. It’s really impossible to be author and editor of your own material.

Do you gift books to readers to do reviews?
Yes, but I prefer to send electronic formats to keep the cost of doing so reasonable. A lot of people who ask for a paperback don’t realize I have to buy it at cost and pay for shipping. But, depending on the request, I’ll consider mailing a hard copy.

Would you ever ask a reviewer to change their review if it was not all positive about your book/books?
No. In fact, when I read an overly negative review of another author’s work, it piques my interest. Was it really that bad? So, I might even read some sample pages that I otherwise would have ignored.
Creativity is always subject to taste. No one ever has 100% acclaim. If you have widespread support among the masses, that’s as good as it gets.

How do you market/promote your books?
Based on sales, apparently not very well. Each day I try to inform people who haven’t heard about the book’s existence. I write promotional tweets, and I seek out bloggers and reviewers who have an interest in reading a humorous memoir. I think I’m going to be experimenting with free book giveaways in the future just to increase my exposure.

What do you think makes a book a really good bestseller?
Unless this is a trick question, I’m going to guess “high sales.” Seriously, luck plays an important part in the equation. We’ve all read quality books that should have fared better than they did. You can follow the marketing strategy of a bestselling author, and it won’t work for you. If it was that simple, we would have all figured it out by now. It’s like waiting on the side of the road with a broken down car. You need someone with jumper cables to stop and kick over the engine. But, that may never happen.

What do you do to unwind and relax? Do you have a hobby?
Even though I’m a quiet person, my mind is always spinning. I get so focused on my thoughts that sometimes I forget what’s happening around me. So, in that sense, I am wrapped tight even though I look calm and composed to those around me. I’m a big music fan. I have more than 25,000 songs on my iPod. I really love music that delivers a message lyrically. That’s probably because of the writer in me.

Are there any hidden messages or morals contained in your books?
Yes, but I have no idea what they are. I think just about every book has them, and sometimes the author doesn’t know. I’m waiting for a reader who likes to over-analyze things to tell me all the lessons they gleaned from the book.

Is there a certain author that influenced you in writing?
Believe it or not, most of what I read is science fiction. Mostly short stories. I like to read smaller chunks because it’s hard for me to focus on hundreds of pages in one shot. When it comes to science fiction, I just love The Twilight Zone and its creator, Rod Serling. He was a very gifted writer.
I actually stay away from humor because I want mine to be as original as I can make it. But, even though he’s not really considered an author, I really appreciate what George Carlin did. After all, he was a writer who acted out his material on stage as a comedian.

What piece of advice would you give to a new writer?
Do as I didn’t do. Start today, not tomorrow. Make a commitment to write 250 words each day, which is what I finally did. Eventually your story gets written.
If you ever consider writing an honest personal experiences book, start with the things that you're not proud of. Then write about the things that hurt the most. If you get past those two things, you'll finish the book—if it isn't already finished.

Where can readers follow you?
I’m active on Twitter under @AlanFelyk.
I also have a Facebook page for Damaged Right Out Of The Box at http://www.facebook.com/pages/Damaged-Right-Out-Of-The-Box/200737026604589. And, of course, I have a website that I hate to update because of the work involved at http://alanfelyk.com.
Posted by Jeanz xx at 16:00