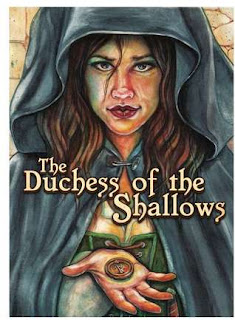 What is your name, where were you born and where do you live now?
We're Neil McGarry and Daniel Ravipinto. Dan was born in New Jersey. Neil's from Philadelphia originally, and it's where we both make our home now.

Did you always want to be a writer? If not what did you want to be?
Dan: Creative work's always been my dream. I always envisioned building something out of my imagination, the most common dreams being either a game designer or a writer.

Neil: Yes, although I got side-tracked from it for a few years. Thankfully, I got re-tracked. If that didn't work out, I planned on becoming the sixth Go-Go.

Do you work another job as well as your writing work?
Dan's day job is as a computer programmer. Neil has sworn an oath not to speak of his.

How long does it usually take you to write a book, from the original idea to finishing writing it?
We worked on The Duchess of the Shallows for three years, on and off. Our current work is going much more quickly; we're hoping to finish it within a year.

BLURB from Goodreads
A game is played in the fog-shrouded city of Rodaas, and every citizen, from the nameless of the Shallows to the noblest of the Garden, is a player or a pawn. And no one is as he appears.Not Minette, brothel-keeper and obsessive collector of secrets. Not Uncle Cornelius, fearsome chief of the gang of brutes and murderers known as the Red. Not the cults of Death, Wisdom, and Illumination, eternally scheming and plotting along the Godswalk.And certainly not the orphaned bread girl known as Duchess.Yet armed with nothing more than her wits, her good friend Lysander and a brass mark of dubious origin Duchess will dare to play that game for the most coveted of prizes: initiation into a secret society ofthieves, spies and rumormongers who stand supreme in a city where corruption and lies are common coin.The Grey.

Do you have plans for a new book? Is this book part of a series?
Right now, we're concentrating on finishing The Fall of Ventaris, which is a sequel to our first book. We envision a total of five or six books in the series and are trying not to plan much beyond that. That said, we always have ideas we file away for future use.

What genre would you place your books into?
Our books could best be categorized as fantasy, but they tend to be driven more by character than plot, though of course plot is important. We try to concentrate on the people in our stories, what makes them unique and how their choices and the consequences of those choices affect the world in which they live.

If you had to choose to be one of your characters in your book/books which would you be? And why?
Neil: Noam, the foster father of our main character, Duchess. By all appearances he's just a baker but there's an air of mystery about him, and even the formidable Minette respects him. I like the trope of the regular guy who is nonetheless to be reckoned with.

Dan: Lysander. In a lot of ways, he has the sort of self-confidence I'd love to have, as well as being completely in charge of his own life and choices. He might not always be happy where he is, but he's always certain how he got there.

Do you have anybody read your books and give you reviews before you officially release them?
We have many test readers who gave us some great feedback on the book, all of which we made use of. Of particular note are Daniel Linehan and Mark Fabrizi, who are both careful readers of fiction and provided invaluable feedback for improving the work.

What was the toughest/best review you have ever had?
There's one review that's the same answer to both questions, by Pauline's Fantasy Reviews (http://paulinesfantasyreviews.blogspot.com/2012/05/review-duchess-of-shallows-by-neil.html). Pauline is in general a thoughtful and insightful reviewer.

How do you come up with characters names and place names in your books?
With character names, in each case we were trying to evoke a feeling in the reader from the very first time they heard the name. Lysander and Minette in particular, each gave us a very particular image of who they might be just from their name.

Do you basic plot/plan for your book, before you actually begin writing it out? Or do you let the writing flow and see where it takes the story?
A combination of both. The books are based on a game we played together, so the most basic plot elements have been known from the start. We know where the story starts and ends in a very general sense.

That said, we're constantly surprised at how elements can change and flow in the writing. Characters who were in the background suddenly take on a new importance, plot threads we thought finished come back to haunt the characters, that sort of thing. It keeps the entire process fresh even though we have the general points of the story laid out.

What do you think makes a book a really good/bestseller?
Neil: Bestsellers and good books are not necessarily the same. I've read obscure books that are wonderful

Shardik, I am looking in your direction – and popular books that were...less so.

Dan: I think a great book is one that tells the truth. Fiction, for me, is all about telling emotional or fundamental truth by telling lies. We weave stories of people who never existed, in places that will never be but in the best of books the truth of them comes through in a way that describing reality would never touch on.

If you could invite three favourite writers to dinner, who would you invite and enjoy chatting with?
Presuming that they don't have to be currently alive? Ira Levin, definitely. From amongst the still-living, George R. R. Martin and R.A. MacAvoy.

We have a page for Duchess at Peccable Productions:http://www.peccable.com/duchess
Posted by Jeanz xx at 03:00