THE SECRET DIARY OF A SINGLE MUM BY KATHERINE WILLIAMS 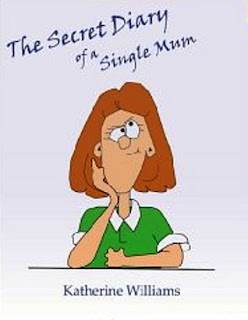 
BLURB from Goodreads
The capture of Osama Bin Laden, the royal wedding, Jeremy Clarkson, Ryan Giggs and the plight of the travelling-folk, this hilarious diary takes you through real events during 2010 and 2011 as seen by a rather opinionated single mum.Woven in with the current affairs commentary is the story of Single-Mum, The Teenager, Annabelle and Hector the dog.The diary picks up real parenting situations and real problems faced by anybody attempting to bring order to the chaos that is the life of a single parent.Single-Mum makes no apology for the scrapes she gets herself into and as a result, her diary is a reassuring, laugh-out-loud, journey through 2010 and 2011.

MY REVIEW
I downloaded this e-book form Amazon.co.uk when it was Free!The cartoonists nature of the cover suggested that it would be a light funny type of read. Wow this one really delivered. Its humour that any mum or single mum can identify with. You go through the trials and tribulations of dealing with the ex and his ultimate let downs, when he doesn't turn up, doesn't pay his CSA or brings the kids home early. Then there the dealing with a teenager. the only thing I felt missing was a bit of interaction with the older generation. though having said that there was so much already covered. I am the type of person that likes the program "Mock The Week" a satirical look at the weeks news. Well you would put this book on a par with that program it is a satirical look at the world through the tired eyes of a single mum trying to make ends meet and the money stretch like elastic. I loved the references to PNP = Pot Noodle Parenting. I won't go into more detail as then it would spoil your discovery of this, in my opinion brilliant, laugh out loud book! Even though I downloaded this book as a freebie I would definitely say its worth buying! I also have to say I would love this fellow single mum as a friend! Life would never be dull or feel miserable with her wit and take on life around.
Did I enjoy it? Oh, Yes! Would I recommend it? Yes to all mums! (not just the single ones, though when I look around at myself and my friends most of them seem to be single mums!
Would I read more by Katherine Williams? Yes please! Would I read a BK2? Yes