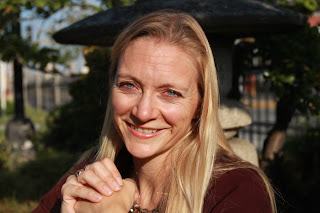 What is your name, where were you born and where do you live now?
My name is Anne Marie Ruff, I was born in Minneapolis, Minnesota, and now live in Los Angeles.  In between I have lived in Bangkok, Thailand; Abu Dhabi – the capital of the United Arab Emirates, and Bakersfield, California.  Since one can only live in so many places, I have tried to travel to as many other countries as I could possibly finagle. 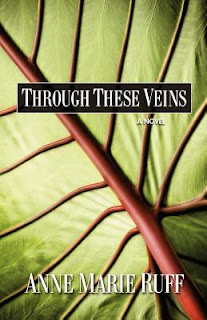 BLURB from Goodreads
In the coffee-growing highlands of Ethiopia, an Italian scientist on a plant collecting expedition discovers a local medicine man dispensing an apparent cure for AIDS. As the medicine man’s teenage daughter reveals the plants behind the cure, their lives become irrevocably intertwined. Through These Veins weaves together the dramatically different worlds of traditional healing, U.S. government funded AIDS research, and the pharmaceutical industry in an intensely personal, fast-paced tale of scientific intrigue and love, with both devastating and hopeful effect.

View HIV/AIDS from an unexpected perspective, and help conserve the possibility of a cure in the process.

All profits from the sale of this book ($3.45 of the $4.99 price) will be distributed to the Campaign for Access to Essential Medicines of Médecins Sans Frontières/Doctors Without Borders and the Institute of Biodiversity Conservation in Ethiopia.

What can we expect from you in the future?  ie More books of the same genre? Books of a different genre?
At the moment I am about two thirds of the way through a new novel.  The one line synopsis: an American woman marries a Pakistani man, a man who subsequently commits a terrorist act.  The story delves into some searing questions about identity and loyalty, justice and revenge.  While the book is by no means autobiographical, I am drawing on my own experience of a cross-cultural marriage (I married a Sikh man from India) and a familiarity with Islamic culture which I developed during three years I spent living in Abu Dhabi, the capital of the United Arab Emirates, which hosts a large Pakistani population.  The new book is similar in genre to Through These Veins only in that it grapples with hard questions, and follows characters who are all morally compromised – as I think all real people are.

Do you have a certain routine you have for writing? ie You listen to music, sit in a certain chair?
I think the discipline to continue with a routine is as important as any specific routine.  After floundering with an outline for my second novel for a year, I started dedicating an hour every Saturday morning to leaving the house to write.  Then I moved into a house, and my weekday commute to my office went from a four block walk to a four mile bus ride.  The bus commute turned into a windfall of undisturbed time.  So for the last ten months, every weekday morning I write 250 words on the bus.  In fact, I am writing on the bus right now (I reserve the afternoon commute for blogging, article writing, or other non-novel writing).  The time is so precious that I don’t waste any of it.  I know by the time the bus passes through Chinatown I need to have an idea about what I am writing, I know that once the bus turns on to Grand Avenue, I better be at least halfway done, and I know that once I press the ‘stop request’ button on the bus, I have a single block to dash out the last thought.  As a recovering journalist, I love a deadline, so I have found that the bus driver willingly – if unknowingly – imposes them every day! After a while, the accumulation of words becomes a motivation in and of itself, so the discipline imposed the routine, and now the routine feeds the discipline.
Do you read all the reviews of your book/books?
I admit that I do read all the reviews of my book.  I find the critical comments helpful, as I am writing my second novel, and the positive comments inspire me.  I consider each and every reader a small victory, given the endless alternatives readers have in which to spend their time.  Sometimes, when I wonder why I bother working so hard to write, I read some of my book reviews.  Readers remind me that Through These Veins has been an experience they loved, the characters became people they cared about.  I am delighted that readers consistently report they couldn’t put they book down because they wanted to know what would happen next.  So in my own way I am expanding other peoples’ lives.  (I have a theory that art has been essential to our evolution, by increasing our experience of life – see my blog post more art = more life).  And that is a way I can serve others with a gift I have cultivated.  All art requires that someone perceive the artist’s work.  So, the reviews complete that cycle of creating and sharing art, so I am grateful for each one of them.

How do you come up with the Title and Cover Designs for your book/books?Who designed the Cover of your books?
My sister, Kris Ruff, hurried up and waited several times with her spot on design work for the cover of Through These Veins, according to my stop and start internal deadlines.  In her decades of graphic design work, she had never designed a book cover, but I wouldn’t hesitate to ask her to do the next one for me.

Did you have a favourite author as a child?
I have loved so many authors, it is hard to single out just one.  But from my pre-teen years, I especially remember Madeline L’Engle’s A Wrinkle in Time, for its intelligent and imaginative story.  Susan Coopers’ The Dark is Rising series also stands out, as it indelibly impressed me about the sometimes hidden, but ever-present malevolent forces in the world.  Later, I learned to love Virginia Woolf’s To the Lighthouse for the way she sculpted common experiences into art through language.  Can I keep going?  Just discussing books and writers is delicious.  I loved Barbara Kingsolver’s aesthetic and biological sensibility in The Poisonwood Bible.  Haruki Murakami astounded me with the force of his originality in The Wind-Up Bird Chronicle, and perhaps my favorite novel of all time is Salman Rushdie’s The Ground Beneath Her Feet for capturing almost every possible type of human relationship between its covers.  OK, I’ll stop here.  No, wait! Just one more.  Now that I have kids I have a rekindled passion for Dr. Seuss, especially the Butter Battle Book.