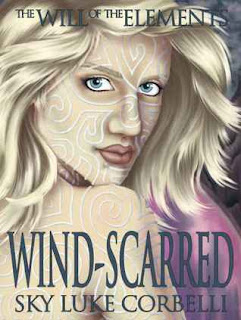 Ezra Hawkins is going to change the world. Although, honestly, there isn't that much world left to change. After the Great War that nearly destroyed the Earth, mankind has been reduced to a single city: Sanctuary. Hidden from the ravages of the world, the last scions of humanity have eked out their existence through hard work and ingenuity, managing survival, maybe even a little happiness. But Ezra Hawkins, last heir to the legacy of wormhole technology, will show them something that no human in over a thousand years has known: Hope. This is a story of science against magic, of people who can bend the elements to their will and the shadowy forces that police them. And most of all, Wind-Scarred tells the tale of a young man desperate to learn the true nature of the past, and of a planet that has its own ideas about the future.