THE BABY MERCHANT BY KIT REED 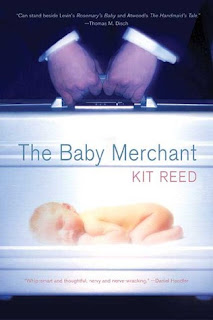 BLURB from Goodreads
The baby business is booming. Billions of dollars are spent each year on strollers, cribs, and clothing, not to mention assisted reproduction and adoption. With fertility rates dropping precipitously in the US and babies becoming ever more valuable as a combination of status symbol and perfect accessory, there's clearly a developing market for someone like Tom Starbird. Tom is The Baby Merchant--though he'd never think of himself in such terms. In his mind, Tom creates perfect families by matching famous couples with prime--but neglected--newborns. Tom's a master of surveillance and secret "pick-ups". His small staff is extremely well-paid, especially the doctor who implants the government-required tracking chip into each infant's developing skull. Sasha Egan is a talented artist feeling trapped by an accidental pregnancy. Determined to place her child with a loving family, Sasha is jolted by the arrival, at her chosen home for unwed mothers, of the unborn baby's father. Behind Gary's insincere protestations of love, Sasha detects the hand of her powerful, wealthy grandmother. Nearly nine months pregnant, Sasha disappears, going to ground at a seedy motel.Jake Zorn is a crusading TV journalist who has broken some of the biggest scandals of the day. His life is perfect--except that he and his rainmaker attorney wife, Maury, cannot have children. They've tried everything; repeated miscarriages drove Maury to a terrible act that makes adoption agencies turn them away. Tom Starbird is Jake's last chance, but it's too late--Tom wants out of the baby business. Jake Zorn knows more than a few hard truths about Tom Starbird, and he's not afraid to expose them to the nation.Desperate to find a baby for the Zorns, Tom Starbird settles on Sasha Egan as the perfect supplier. Soon Sasha's baby will be born. And many lives will be forever altered.

For some reason I had thought that this book was more dystopian and perhaps along the lines of Bumped by Megan McCafferty, having said that it was a really good read. I enjoyed this book even though it wasn't exactly what I was expecting.
Kit Reed writes so well and describes things so well that you can, for example, imagine the surroundings of the Del Mar motel. The book has quite complex, with complex relationships in it. The relationship between Tom and Daria. That even though Tom feels Daria never wanted him, he still feels that he has to protect her from the nastiness of a Jake Zorn exposé.
I liked the indecision of Sasha Egan, initially she wants nothing to do with her baby, she cannot wait for the time to come when she can hand the child over and relinquish all responsibility for it. Yet when her precious baby goes missing she is like a tigress who has been separated from her baby cub.
The changes that baby merchant Tom Starbird goes through is also amazing. He starts off thinking of the babies as a "product" the babies mother is just the person he need to distract long enough to steal her baby away. Tom provides a "service" for those that can afford it. tom chooses babies he thinks are unwanted and "removes" them from that home and places them with a couple who desperately want a baby but have run out of "normal channel options" to have one.Tom does target those mothers whom in his opinion do not want the responsibility and do not wish to be encumbered by a child. Tom tries to not become emotionally involved too. He doesn't usually handle the "product" himself he has staff to do that. The whole case with Jake Zorn is however different from the very beginning as Tom has actually decided to retire from his "job",Tom has even paid off his former employees. Then Jake Zorn comes along and blackmails him into one last job.
I suppose in a way you have to feel sorry for Jake Zorn, as in his own way he is only trying to make his wife Maury's dream of having a baby come true. Its the way he goes about enlisting Tom that is the bad thing.
I did enjoy the mystery, suspense and intrigue of this book. Where Tom hints to us at his upbringing, then later in the book we learn what his mother Daria did to make Tom feel this way.
The ending is left for you to  finish in your imagination as to what happens to Tom. We are given a set of "clues" or "glimpses" into the fact that Sasha will be fine in the end.
So did I enjoy this book? Yes Would I recommend it? Yes Do I think there will be a book 2? No as the majority of loose ends are tightly wrapped up, and Kit says she doesn't do series in the Interview she did with me.  Will I read more books by Kit Reed? Oh, Yes!