EXCERPT - WE SHALL RISE BY J.E. HOPKINS 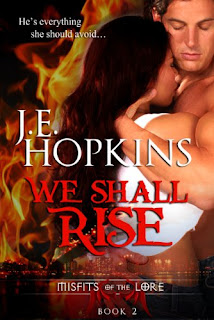 Before she could blink, he used his supernatural speed to move in front of her. He pressed his body into hers, intensifying the fireworks between them, his strikingly handsome face a mere inch away from hers. The slightest lean forward and he would once again taste the sweetness of her lips. He remembered that one kiss they shared. It may have been a ploy on her part to lure Helena out from hiding, but for him it was the gas that ignited the flame of his buried heart. So often he dreamt of that moment—her taste was so sweet and uniquely Reysa. She was the only elixir that could quench his interminable thirst.
He leaned to the side, burying his face in her neck, breathing in her jasmine scent. Although he was well over six feet, with those heeled boots, Reysa was only a couple of inches shorter.
Breathing in deeply, Kaden responded, “You don’t smell repulsed.” He pulled back, but remained close, staring intently to Reysa’s darkening eyes. “You don’t look repulsed either. You just look hungry.”
Kaden knew he was treading dangerous ground here. The goal was to push Reysa far away from the darkness that surrounded him, yet his body screamed for her. What he wouldn’t give for another taste. Maybe one more chance to savor her unique flavor would free him from this dreadful need, but he feared once would never be enough. He would fight this temptation. He would never be a slave to lust again. He barely survived Helena and Reysa already duped him once, using his attraction to get him to comply with her plan. He would not fall victim to his passions again. He would stay in control.
“Get away from me,” Reysa warned in a calm but lethal voice that signaled Kaden was about to cross a line that would lead to severe pain and not the pleasurable kind.
Kaden wanted her to back down first. He wanted her to be the one to walk away, but Reysa never responded the way he planned. Goading her was the only option.
“Too intense for you, Rey? Can’t fight your longing for me? You’re not the first woman who had a hard time resisting and you won’t be the last. I just have that effect on the opposite sex. Don’t be too hard on yourself, babe. Would you like me to kiss you and make your ache go away?” Please say yes, Kaden hoped, even though his mind cursed him for asking the dangerous question.
“Don’t touch me, Kaden,” Reysa warned again.
A smart man might have taken a few steps back and put an end to this tension, but Kaden reveled in the challenge. He enjoyed pushing Reysa to her limits. He wanted to see this beauty explode. She was so close to an eruption. Too close for Kaden to back down now.
Kaden bent his head forward to brush his lips against hers, but before he could savor the taste, Reysa was gone. The next thing he felt was a heel in his ass, launching him through the wall of the warehouse.  He dug himself out of the debris and crawled to safety before another portion of the wall collapsed on him. The motion caused a searing pain in his arm. His collarbone was dislocated, but no serious damage. He closed his eyes and quickly tugged his bone back into place as he spat out a mouthful of plaster. The pain was intense, but it would pass. He opened his eyes and saw his favorite pair of legs standing in front of him. He gradually looked up and his eyes met a long, silver sword pointing a little too close to his head.
Those blades were never far from their owner. They were a constant companion to Reysa that she used to protect herself, as well as her fellow Misfits. Her skill was undeniable.
“I’m not apologizing for this,” Reysa explained shifting the sword to point to Kaden’s neck. “I told you to back off, but you wouldn’t listen. You kept pushing and pushing until I had no choice but to push back. It’s not my fault that I pushed a little harder. Next time, when a girl says ‘no,’ you’ll hear her.”