EXCERPT - MARK OF THE SEER BY JENNA KAY 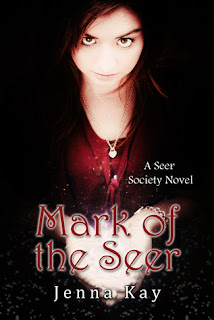 Excerpt from Chapter Twelve, Mark of the Seer

“What do they mean, Sam?”  I asked urgently.  “Why do I have tattoos on my hands?”
His eyes fell to my hands.  He flipped them over, lovingly stroking the crosses.  I winced at the sight of them.
“They are not tattoos,”  he answered in a bare whisper, still admiring them.  “They are marks that have appeared on millions since the fall.”
“Why do I have them?”  I asked again.
His gaze eventually drifted back to me.  “They are the marks of the Seer.  You are a Seer, Clarity.”
I stared at him in paralyzed shock.  “That's what Lukus called me!  But I. . .I don't. . .”
I was totally floored and speechless.  His proclamation had hit me like a thunderbolt falling from the sky, striking me and then leaving me numb from the top of my head to the tips of my toes.
Seer.  Lukus's voice echoed in my head—the demons had called me a Seer.  The problem was that I had no idea what a Seer was.
As if reading my mind Sam leaned closer to me, just inches away from my face, his eyes burning with fired-up serenity.  The smell of lavender circulated around us with a calming intoxication of pure love.
“You can see into the spirit realm.  Not only can you see what's in front of you, but you can also see what other humans can't.  As your gift matures you'll be able to fight the forces of the wicked alongside me.”
“How is that even possible?”  I challenged.  “Out of all the billions of people on the planet, why am I the only one who can see supernatural. . .things?”
“You're not the only one,”  he confessed.  “In Garlandton you are, but not the only one in the world.”
I looked at him, blatantly puzzled.  My head pounded as I tried to grasp his words that sounded like they had been blended together in a glass of absolute disarray.  I was still trying to wrap my mind around angels and demons existing, and to add Seer to the whole mix was just plain irritating.
“What does Ra'ah and Chozeh mean?”  I inquired, knowing very well I was butchering the pronunciations of the strange words.  The way they came from my mouth didn't sound at all like how the demons had sounded them.
Sam chose not to point out my brutal massacre of the words.  “Those are just other ways to say Seer.  Ra'ah basically means that you are able to see.  Chozeh means you're an observer of visions.”
“Visions?”
He nodded.  “Most visions come to you through dreams, but sometimes they can happen while you're wide awake.  Being a Seer you may be able to see something that will happen years down the road, or you will be able to see something just moments before they happen.”
Stupefied I asked,  “I'll be able to see the future?  How crazy is that?!”
“No, no, no,”  he replied ruefully.  “Don't get your gift from above confused with fortune telling—those are two very different subjects.  Your visions will come directly from the Father, whenever and wherever you are.”
Amazement infused my nerves as I digested everything he was saying, and I tried really hard to keep an opened mind.  Just sixty some-odd days ago my life had presumably been normal, but now I was sitting in my room having a conversation with my guardian angel about me being a Seer who not only could see into the spiritual world, but also could receive visions from God.
My life was so far from normal it was pathetic.