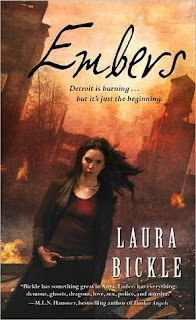 “One of the most promising debut novels I’ve read in a great while… I’d highly recommend this book to anybody who reads fantasy. It reminds me in many regards…of another exceptional first novel…Emma Bull’s seminal War for the Oaks, and there’s not much higher praise that I can give.”
—Elizabeth Bear on Tor.com

“Gritty but never grim, Embers is a truly urban fantasy, where the soul of a city haunts every page. I can’t wait for more of Anya and the unforgettable Sparky!”
—Jeri Smith-Ready, award-winning author of Bad to the Bone and Shade

Unemployment, despair, anger--visible and invisible unrest feed the undercurrent of Detroit's unease. A city increasingly invaded by phantoms now faces a malevolent force that further stokes fear and chaos throughout the city.

Anya Kalinczyk spends her days as an arson investigator with the Detroit Fire Department, and her nights pursuing malicious spirits with a team of eccentric ghost hunters. Anya--who is the rarest type of psychic medium, a Lantern--suspects a supernatural arsonist is setting blazes to summon a fiery ancient entity that will leave the city in cinders. By Devil's Night, the spell will be complete, unless Anya--with the help of her salamander familiar and the paranormal investigating team --can stop it.

Anya's accustomed to danger and believes herself inured to loneliness and loss. But this time she's risking everything: her city, her soul, and a man who sees and accepts her for everything she is. Keeping all three safe will be the biggest challenge she's ever faced.

EMBERS is available at Amazon.co.uk

Read an excerpt at http://books.simonandschuster.com/Embers/Laura-Bickle/9781439167656/excerpt 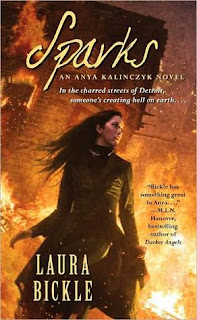 The second book in Bickle’s series about Anya Kalinczyk is just as wonderful as the first—Anya is a compelling and likable protagonist and Bickle does an outstanding job in her portrayal of the city of Detroit; there are ruins, yes, but also hope in the ashes. Anya never takes herself too seriously and there is a scene in a baby supercenter that is absolutely not to be missed. (4 stars)
- RT Book Reviews

WITHOUT A TRACE...
Anya Kalinczyk is the rarest type of psychic medium, a Lantern, who holds down a day job as an arson investigator with the Detroit Fire Department—while working 24/7 to exterminate malicious spirits haunting a city plagued by unemployment and despair. Along with her inseparable salamander familiar, Sparky, Anya has seen, and even survived, all manner of fiery hell—but her newest case sparks suspicions of a bizarre phenomenon that no one but her eccentric team of ghost hunters might believe: spontaneous human combustion.
After fire consumes the home of elderly Jasper Bernard, Anya is stunned to discover his remains—or, more precisely, a lack of them; even the fiercest fires leave some trace of their victims—and she is sure this was no naturally occurring blaze. Soon she’s unearthed a connection to a celebrity psychic who preys on Detroit’s poor, promising miracles for money. But Hope Solomon wants more—she’s collecting spirits, and in a frantic race against time, Anya will face down an evil adversary who threatens her fragile relationship with her lover, her beloved Sparky’s freshly hatched newts, and the wandering souls of the entire city.

SPARKS is available at Amazon.co.uk

Read an excerpt at http://books.simonandschuster.com/Sparks/Laura-Bickle/9781439167687/excerpt