EXCERPT - THE ZOMBIES AND DEAD RELATIVES BY MM SHELLEY 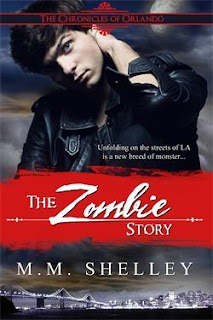 The Zombie Story
They rode by Union Station headed south towards North Broadway. Ruben came to a quick stop without signaling his intent. He had pulled up to a bakery.
“Why are we stopping here? You hungry are something?” asked as he parked alongside him.
Removing his helmet Ruben responded, “Or something. This place can get pretty crazy. You’ll see.”
The place was busy, filled with tourists who made their way up and down the streets of .
Ruben and Orlando began to walk away from their motorcycles, Ruben paused and without looking back, he raised his right arm and pushed a button on a keychain. The noise of two beeps sounded securing his ride.
“Seriously?” asked as they continued forward.
Ruben ignored the question, instead he pointed out a small shop that sold herbs and teas. “This place is known for its underground fighting. I think it would be a good place to test you.”
“Underground fighting? In that place?” He asked uncertain about whether or not Ruben was being straight with him.
“Yeah, come on I’ll show you,” an eager smile on his face.
Ruben entered the shop first; the door bell chimed alerting his presence. was hesitant to follow. Through the huge windows noticed that no one was at the front counter.  Again the door chimed as strode in, not quiet sure what was really going on.
Ruben headed into the backroom, “Looks like they’re all downstairs already.” He came to a stop in a small hallway, which oddly held no doorways. Kneeling down Ruben removed a piece of board that was covering a narrow opening. Looking intently at he asked, “How’s your magick? Are you a classified novice or mercurial?”
didn’t know the answer to that, for he hadn’t been tested yet so he said, “Guess we’ll find out.”
“Fair enough,” Ruben was about to lead the way down when he was stopped by ’s question.
“Who am I going to be fighting?”
“Not who, it’s what. People like to see zombies fight each other and bet on them.”
“Oh,” thought that was the craziest thing he had ever heard.
“Yeah, it’s totally awesome.” The sound of excitement in his voice was clear. “It’s how I met Maxwell; he showed up one day and asked me if I wanted to hunt these things down. Said I’d be good at it, because, you know, I kicked their asses in the ring.”
“Wait a minute; you went one on one with zombies?” That took by surprise.
With a grin on his face he said, “All the time, it was easy money.” Becoming serious he added, “Just don’t embarrass me man, these guys here, they know me.” With that said he led the way down the stairs and into a tunnel.
They could hear the noise from the fighting at the end of the tunnel. The sounds of bone hitting bone, the grunting and the shouts of the gamers placing bets on the fights, greeted them as they made the way down the tunnel.
“Yo!” Ruben shouted. “How’s it going?”  He asked the man at the entrance to a cavern. It looked like a basement. There were crates stacked up along one side of the wall. Several tunnels had been cut into the basement leading who knew where. There was no traditional looking ring in the basement. Just an area that was empty and it looked like there was dried blood on the ground.
“You in today?” the man asked. “We got some good ones.”
“Yeah? That’s awesome!” Ruben called over, “This here is my friend Orlando. My money’s on him.”
“For real?” the man asked uncertain. He looked over, not sure there was a fighter in him.
“Dude, you’re asking me? You do remember all the wins I have under my belt?” He took a few steps forward to assert his statement.
The man began to laugh uncomfortably, “Let’s put him in.”
Ruben turned back to a huge grin on his face as he asked, “You didn’t eat this morning did you?” 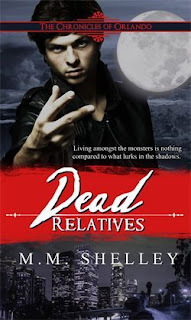 Dead Relatives
Michael stepped out of a car that he had ‘borrowed’ and waved down. Michael had to raise his voice in order to be heard over the engine. “What happened to Ruben?” he asked.
turned the engine off and gave a quick answer, “He was hurt.” He then went on to change the subject back to the reason he had driven so far. “What info do you have about the fifth?
They had decided to number the six men that they were looking for. They felt it was easier to keep track of them that way. Jeffries had been number six and he was safely tucked away at the camp.
The camp was compiled of hunters and others who had no place else to go. had only been calling it home for about a week. He’d been gone from home for a week and he hadn’t even contacted his family, he knew that they wouldn’t be safe if he did. He had heard that someone had placed a bounty on his head. That someone had been asking questions about him and had even shown up at his high school and had come by the camp.
Michael walked over to a garage and pulling the lever he opened it, inside was dark. rolled his motorcycle inside and Michael released the lever allowing it to close them inside.
A light turned on, could see that it was a work space, tables had been set up and computer equipment was actively running some sort of data. The windows to the garage had been blacked out.
“I’ve been monitoring them for a few days.” Michael said as he waved over to a computer screen. “Every two hours a code name pops up. Lexicon.”
“Lexicon? Is that the name of the fifth?”
“I couldn’t say for sure. It could be the name of a project or something else.”
“What else does it say?”
“They are preparing for some kind of delivery. I don’t know much more then that.”
“Let’s go.” said. “Let’s get it done.”
“You don’t want to wait for Ruben?” Michael asked as he seemed unsure about proceeding without him.
took a step toward him. “Ruben is not an unclassified Wizard. He’s not even a Mercurial.”
“Yeah, but your magick hasn’t been the most reliable.”
didn’t like hearing that. “This coming from a novice?”
Michael backed down at his words. “I was just saying.”
The classification of magick was simple; there were three levels of magick: Wizard, Mercurial and Novice. A Wizard was someone who’s magick was most strong and constant. It was rare to be a classified Wizard and many doubted the existence of them.
A Mercurial had magick, yet the magick was never reliable, it was never steady and it could be destructive. The steady use of magick over time could make the person go mad from the effects.
A person with the least possible amount of magick was called a Novice. Novices had no control over magick when it was used. Most Novices went years without being able to use magick or sometimes they never used it at all.
The effects of Magick had been widely studied with tests and experiments to somehow control how a person used magick, to make magick more effective for a Novice and to control the desire for more magick in a Mercurial. None of these experiments had been effective and had ended in disaster.
The classification of magick was put into effect to control and curb one’s use of it. Everyone would begin the process of classification, which took years, at the age of thirteen or fourteen. They would be subjected to an endurance test and an I.Q. test to determine their classification. The classification, once given, would determine the course of one’s future. With the economy in a recession and well on its way into a depression, the classification process was more important than ever.
was an unclassified Wizard; his parents had taken great pains to avoid the classification process for him. ’s mother was a pharmaceutical technician and had knowledge of the research that was done on anyone who was classified as a Wizard.
Orlando and Michael agreed to a plan and decided that they would arrive separately. As turned his cell phone to silent he noted that Elodie had called him and that she had left a message. He would call her later when he had good news.