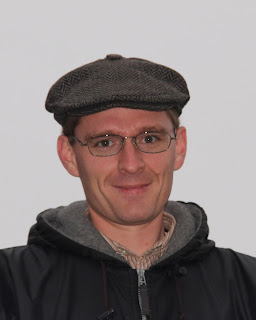 
My name is Aaron Jordan.  I was born in Salt Lake City, Utah.  I currently live in Charlottesville, Virginia, but only while my wife is in school.

Did you always want to be a writer? If not what did you want to be?
I have wanted to be a writer for as long as I can remember, though I have wanted to do other things also.  When I was a child and watched the television show The Fall Guy, I wanted to be a Hollywood stuntman.  Later I wanted to be a jet fighter pilot and astronaut and study aeronautical engineering.  By high school I wanted to be a pediatric heart surgeon, but this goal ended once I started the pre-medical program in college.  That is when I decided to get a law degree and become a diplomat.  I now have the legal education and have not entirely ruled out diplomacy, but I am not actively trying to get into the Foreign Service at this time.  I will probably continue to practice law . . . unless my writing takes me in a new direction.

When did you first consider yourself as a "writer"?
Probably when I was nine years old and wrote a Star-Wars-like science fiction story in elementary school.

Did it take a long time to get your first book published?
It took probably about four or five years to see my first novel in print after I first attempted to write a novel.

Do you work another job as well as your writing work?
Yes.  I work as an attorney.

What is the name of your latest book, and if you had to summarise it in less than 20 words what would you say?
The name of my latest book is Insanity, which asks two main questions: Are people basically good or evil?  Can they govern themselves in freedom or not?

Who is your publisher? or do you self publish?
My publisher is Cedar Fort, Inc.  It is a small publisher in Utah, where I used to live.  Cedar Fort publishes a lot of LDS books, especially for the local Utah market, but it also publishes mainstream fiction for a broader national and international market.  Insanity falls into that broader category.  All books published by Cedar Fort have to meet certain basic standards to maintain the publisher’s family-friendly image, so you won’t find any swearing or graphic sex or extreme violence in Insanity.

Do you have plans for a new book? Is this book part of a series?
Insanity is a stand-alone novel.  I suppose I could write a sequel to it, but I have no such plans at this time.  Right now I am getting close to finishing a new novel that is more in the fantasy genre.  It’s about a boy whose mother is dying, and he is given an opportunity to travel into a parallel realm to obtain a unique flower that can heal her.

What genre would you place your books into?
My first novel, A Dream of Freedom, is historical fiction about a Soviet spy in the United States during World War II.  Insanity is soft science fiction—dystopian science fiction, to be more precise.  My new novel, which I will probably name The Elixir, is fantasy.

What made you decide to write that genre of book?
I wrote Insanity as a dystopian novel because I felt that dystopia was the best genre to address the moral and political issues that Insanity raises.  Much of the real world, especially in politics, reflects the sad tendency of human beings to make imperfect reality worse while intending to make it better.  It is the old tragedy of seeking perfect solutions to life’s intractable problems.  Some people eventually realize that they are chasing after castles in the sky, while others never shake off their delusions and carry the fantasies with them to their graves, sometimes leaving havoc in their wake.  Insanity explores different worldviews about human nature and political society.

Do you have a favourite out of the books you have written? If so why is it your favourite?
So far, my favorite is Insanity.  I am a political junky who has always been a sucker for dystopia.  I put my heart and soul into writing Insanity, and I learned much along the way.  I hope that in the future I will produce something even better for readers to sink their teeth into.

Do you have a certain routine you have for writing? ie You listen to music, sit in a certain chair?
For the past couple of years, I have done most of my writing in the front passenger’s seat of my Toyota Corolla.  As a lawyer, I drive all over the Commonwealth of Virginia conducting real estate auctions at courthouses, and I usually have a little time each day while I am waiting for my sales.  That is when I try to squeeze in my writing, because I find it almost impossible to get anything done at home.

Do you have anybody read your books and give you reviews before you officially release them?ie. Your partner, children, friends, reviewers you know?
My mother read Insanity and hated it—well, she hated a particular scene in it and demanded that I alter the plot.  Her strong, visceral reaction convinced me that the story had real punch to it, so I left the plot alone despite my mother’s objections.  You know you’re doing something right when your mother reacts with such palpable intensity.

Do you gift books to readers to do reviews?
Right now, yes.  But I can’t give away free books to everyone.

Do you read all the reviews of your book/books?
I’ve read the reviews of Insanity, but so far only a few people have reviewed it.  I look forward to seeing more reviews on the Internet, such as on Amazon and Goodreads.

Would you ever ask a reviewer to change their review if it was not all positive about your book/books?
No way.  If you hate my book, let the world know why you hate it.  All I ask is that you’re honest about it and don’t misrepresent me or my book.  As far as improving my writing goes, negative feedback helps me probably more than positive feedback, because it shows me what I should change.  Of course, negative reviews might hurt the sales of my book, but then again, if my book isn’t good enough to earn positive reviews, then it does not deserve success, and I don’t want readers wasting their money on an inferior product that does not leave them feeling that they got their money’s worth.  Competition and feedback are what the market is all about, and anyone who knocks me down in a review will see me rise again with a better product later on.  So hit me with your best shot and show me where I need to do better.  And if you love what I have written, give me a boost.

How do you come up with the Title and Cover Designs for your book/books?Who designed the Cover of your books?
Brian Halley at Cedar Fort is responsible for the cover design of Insanity.  I have never met Brian, nor did I collaborate with him directly, but he did an awesome job.  Cedar Fort asked me for suggestions for the cover, and I gave them some ideas.  I proposed a black book with a red title and a large, gray DNA double helix.  I mentioned some other ideas, such as a picture of the world or the city where the story takes place.  I even toyed around with images of mushroom clouds from atomic explosions.  But in my response to Cedar Fort’s request for input, I dismissed these other ideas just as soon as I mentioned them, because I loved the symbolic imagery of the DNA double helix.  I assume it was Brian who took some of these secondary ideas of mine and incorporated them into the final design.
So I helped with the concept for the cover design, and Cedar Fort added some other things, but ultimately Cedar Fort did all the work on the design.  For example, the idea of using the double helix as the “S” in the title was totally Cedar Fort’s, not mine.  I thought that was a great touch.  I also had nothing to do with the catchy phrase above the title that reads, “SOMETIMES THE CURE IS WORSE THAN THE DISEASE.”  Another great touch.

Do you choose a title first, or write the book then choose the title?
I originally chose the title Millennium and then wrote the book, but when I looked at what I had written, I realized that Insanity was a much better title.  I originally had intended to write about the dystopian society that existed for a thousand years, but I had to write my story before I really discovered it.  The writing process revealed the story to me, and in the end, that process showed me that my story was not really about the thousand years of utopia, but was rather about the collapse of that utopia and the consequences unleashed by its demise.  So I guess the answer to both parts of your question is “Yes.”

Are there any hidden messages or morals contained in your books? (Morals as in like Aesops Fables type of "The moral of this story is..")
Insanity is full of morals, metaphors, symbols, and lessons, but I, the author, do not know what all those lessons are.  Some of them are hidden even from me!  Only my readers can uncover them.  I wrote Insanity with various ambiguities and different points of view built into the plot so that readers will have to decide for themselves what the morals of the story are.  I did not want to tell my readers what they should believe.

What piece of advice would you give to a new writer?
Never stop learning and never give up.

Your Twitter details?
aaronjordan11
Posted by Jeanz xx at 06:00