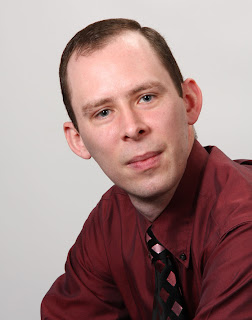 Did you always want to be a writer? If not what did you want to be?
Not at all. When I was little, I wanted to be a garbage man, and I used to practice when my mom and I went to the grocery store. I’d hang off to the side, one-handed, and I’d toss random cans into the cart when my mom had her back to me. But I did always love reading, and when I was smaller, being read to. That was how I woke up in the morning: with a stack of books taller than I was and either my mom or dad’s lap. I’d sit for hours listening to story after story. Out of all the gifts they’ve been able to give me that was certainly one of the best.

What inspired you to write? Did it take you long to get your first book published?
The movie Finding Forrester helped change my way of thinking when it came to writing. I always hated writing in school, because it was all about the rules (not necessarily a bad thing), and it was forced down my throat. I never thought of writing for myself, until I watched Finding Forrester. After the movie, though, something clicked for me, and I realized for a shy guy I had a whole lot to say. I opened this massive floodgate that I haven’t been able to close since. And if I’m lucky, it’ll never close.

It depends on your definition of long. I started writing about twelve years ago, and my initial writing was pretty awful, even though my mom told me it was good. Later I found out that she didn’t particularly care for it, but she didn’t want to hurt my feelings. But I learned a lot along the way, and I constantly strived to improve my craft. Like most writers, my first novel, Falling Immortality, wasn’t the first manuscript I ever wrote. When I started writing it, though, something just clicked, and as I started getting into the story, it felt different than the other stories that had come before it. So before I was able to publish Falling Immortality, I’d already completed work on two sequels.

What is the name of your latest book, and if you had to summarise it in less than 20 words what would you say?
My debut mystery novel is called Falling Immortality. Casey Holden is asked by an attractive widow to solve a cold case, discovering more trouble than he expected.

How long does it usually take you to write a book, from the original idea to finished product?
It really depends on the book. You can’t manipulate art, and you certainly can’t outsmart a fickle muse. When the writing is going well, the words practically flow from my fingertips to the manuscript, without much effort on my part. And when it’s going poorly, you can’t buy a vowel even if you have thousands of dollars in your pocket. But to answer your question, I probably spent a year and a half or so of actual writing and editing time on Falling Immortality. Its sequel Graceful Immortality came a bit quicker. However, the third novel in the series took longer to produce than the second. So it really is a crapshoot.

What can we expect from you in the future? i.e. More books of the same genre? Books of a different genre?
I’d really like to find an audience for Falling Immortality, because I already have two sequels with my publisher. However, they’re a small, independent press, so they want my first novel to have some legs before they commit to doing either of the two sequels. I’ve been told my writing has improved with each manuscript, so I think I’m on the right track. Plus, Casey and I have unfinished business together. And I’ve already learned a few things about marketing a mystery novel, so I’m not ready to change genres just yet. I’ve begun work on manuscripts outside of the mystery genre, but I need to establish myself as a mystery writer first.

What genre would you place your book into?
First and foremost my novel is a mystery. When you begin to narrow it down, I fall into the hard-boiled mystery category, along the lines of Mickey Spillane or Robert B. Parker. You could also classify my books as MANfiction. My novel is written in first person, so I knew I needed a strong voice to sustain my main character through a novel, and ultimately, a series of novels; I try to give the reader enough action to keep them entertained; and he drives a 2005 Dodge Viper SRT-10. I had no idea I’d written myself into the MANfiction sub-genre, but I discovered later that I had all the elements of a MANfiction novel.

Where do you get your book plot ideas from? What/who is your inspiration?
From everywhere. God granted me the gift of an extremely analytical mind, probably to my detriment, in some cases. But it does come in handy when I write. I’m a huge fan of mystery and thriller novels, action movies, and detective TV shows. On some level that I’m not even aware of, I channel all of this knowledge, pull out the different parts that I like the best, and hopefully create something brand new. I haven’t found a character like Casey Holden yet, and so far neither has my publisher.

Do you read all the reviews of your book?
Whether they’re good or bad, I read all the reviews of my book. If someone took the time to read my book, and then went above and beyond the call of duty by writing a review, I figure the least I can do is take the time to read what they have to say. I may not always like everything they have to say, or agree with it, but it’s only fair to give them a bit of my time, since they gave me a bit of theirs.

Do you choose a title first, or write the book then choose the title?
Again, it really depends on the book. Most of the time I either have a title ahead of time, or I come up with a title very early on in the writing process. This was the case with Falling Immortality, and it was the case with many of my as yet unpublished works. I find the title helps give me a bit of focus for the novel, and since it can be tricky to choose a title, it’s nice to get that part out of the way. On the other hand, there have been times when I haven’t chosen an effective title until the end of the process, but it wasn’t from a lack of effort on my part.

How do you market/promote your books?
Since this is my first novel, I’m trying everything I can think of to reach readers. But you also have to tailor your approach to what fits your personality. There are authors out there who believe in the hard sell, but that’s just not me. More than anything, I’m trying to create awareness for my novel, so I’ve become fairly involved in social networking (Facebook and Goodreads), speaking (I’m going to do a series of library talks in New Mexico), advertising online, a website (it’s become standard now), and of course, book signings. I’ve taken quite a few tips from John Kremer, and I’ve tailored them to what I feel most comfortable doing.

Have you ever based characters on people you know or based events on things that have happened to you?
It’s really difficult to write (it’s such an extremely personal endeavor), and not bring out various aspects of my personality. On one level or another, every character in my novels has personality traits or quirks that are either directly from me, or from people I have come in contact with. Since writing for me is an escape from reality, I haven’t yet based any of my plotlines on events in my life, because for the most part, my life is pretty boring, which isn’t necessarily a bad thing.

What do you think about book trailers?
I’m all for book trailers. I had COS Productions create a book trailer for Falling Immortality, and I couldn’t be more pleased with the result. But are book trailers effective promotional tools for novels? So far I haven’t seen where it has affected my book sales, but I hope it has increased awareness of my novel. Even if it doesn’t, though, I would probably still continue to do them, because when they are done right, the end result is fantastic. Plus, I love watching movies, and I’ve always been a big fan of effective movie trailers.

What piece of advice would you give to a new writer?
What I often hear and read frequently myself: never give up. Let’s face it, writing is extremely difficult, and it’s even harder to promote a novel than it is to write one. But if you can’t imagine not doing it, and your main reason for writing is love of the craft, there’s not a more rewarding job out there. Nothing compares to connecting with a reader, and having them actually get what you are trying to do; typing “The End” on a completed manuscript; the entire creation process; or holding the physical book in your hands. Not to take anything away from mothers (since I love mine and wouldn’t be the person I am today without her), but my novel is my baby, and the entire experience will stay with me for the rest of my life.
Posted by Jeanz xx at 13:00