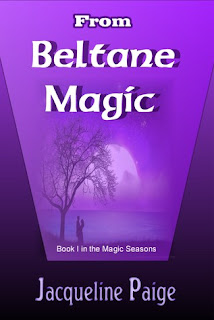 
Book I in the Magic Seasons

Available in eformats and paperback

Blurb:
Step into a world of magic and passions....
Take a dash of spice, heat it
Add a flash of magic and watch the sparks fly
Toss in a killer that's targeting women
Add a handful of witches from all paths to stir it all together...
Each were willing to spend their lives alone and safe; until they’re touched by Beltane Magic.
Can they survive their pasts to be together as they struggle to find a killer before the wheel turns again?

Extended Blurb:
Leena is a woman that is gentle in everything, her personality and moods. She always feels maternal with her closest friends and would go out of their way to look after any one of them. Her ability of controlling the elements and knowledge of plants make her magic abilities strong and unbreakable.  She is a leader at work and in life, always working hard to keep those around her close, but never allowing anyone to get too close.

To the outside world she is just Leena Duncan, a quiet woman who works a normal job and lived a quiet life.
A few times a year she can openly use her magical gifts at celebrations within a small community of people she calls friends.
Having lived through the horrors that can come from the hands of someone you thought loved you; she decided never loving again would prevent more emotional scarring.
It takes one man at a rainy Beltane celebration to change everything she is comfortable with and one killer to change her safe world.
Owen is a man that reflects humor and cavalier vibrations to others, he is gentle and caring as is his ability to draw negative and heal others. If you didn’t know him, you would never realize he came from violence.  Knowing how the real world can be, he has vowed to never put himself into the position, or allow anyone else that could open up the world he has carefully sealed shut forever.

He creates worlds and puts them on paper to entertain others.  After years of using his imagination he finds out his friends can do things he thought only his mind created.
For his entire adult life Owen Grey has always played it safe and kept to his own world of writing, never getting too close to anyone.
Having lived a nightmare growing up he would never take the chance of repeating history.  He may write about happily-ever-after, but knows it is pure fantasy and doesn’t exist.
Until her . . .
http://www.classactbooks.com/From-Beltane-Magic-by-Jacqueline-Paige-PDF_p_320.html