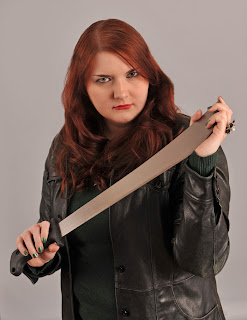 What is the name of your latest book, and if you had to summarise it in less than 20 words what would you say?
Justice. A normal, ballsy police officer who lives in a world inhabited by superbeings finds herself targeted by a supervillain. 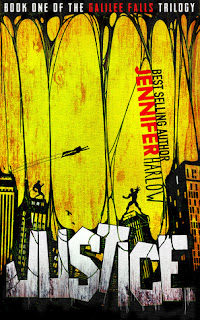 Who is your publisher? Or do you self publish?
I guess I’m what’s called a “hybrid” author. I get the best of both worlds. For my F.R.E.A.K.S. Squad and Midnight Magic Mystery series I have a traditional publisher, Midnight Ink. I did attempt to get Justice traditionally published, I even made six editorial boards and got the most wonderful rejection letters basically saying, “This book is amazing, but it’s never been done before so we can’t take a chance on it.” Thank the gods for the self-publishing revolution or it’d never see the light of day.

How do you come up with the cover designs for your book/books? Who designed the Cover of your books?
I couldn’t be more pleased with the cover for Justice. When I first got the proof from Damonza I was blown away. I seriously think it’s a work of art, like I want to have it made into a painting and hang it on my wall. The man is the best in the business for a reason.

Do you have plans for a new book? Is this book part of a series?
Justice is the first in The Galilee Falls Trilogy, with Galilee Rising the second hopefully out by November (no promises), and Fall of Heroes the last. I haven’t begun writing that one yet so I have no date to give, sorry. When I’m done with those, depending on how well they do (buy my book!) I may do spin-offs featuring characters I introduced in the Trilogy. Nothing definite yet.

What genre would you place your books into? What made you decide to write that genre of book?
This is a hard one to answer. For the purposes of publicity I’ve been calling them urban fantasy, just instead of vampires it’s superheroes. But it fits in so many categories: romance, action & adventure, hard-boiled mystery, thriller. In other words, it has something for everyone, even men. I personally gravitate toward books that defy genre or even create their own. I can safely say nothing like this book has come out before, and if I’m wrong let me know because I’d love to read it.

Do you have a favourite character from your books? Why are they your favourite?
You can’t ask a writer that! It’s like having to pick your favourite child! There are things I love about all of my characters. Bea, from the F.R.E.A.K.S. books, is kind and never backs down. Mona, from What’s A Witch To Do?, takes care of everyone with limited whining and genuinely cares about others. Joanna from Justice may be a bitch but she is fierce and would lay down her life for those she loves. I will say Joanna is the most fun to write just because I can let my inner bitch out. It’s damn hard to be nice all the freaking time.

Which of your books were easier/harder to write than the others?
Justice was a million times harder to write than the F.R.E.A.K.S or even What’s A Witch To Do? because for this one I bled on the page. It’s my most personal book to date. All my frustrations about the unfairness of the world, unrequited love, about being dismissed for not fitting into people’s preconceived notions, all of it came out on the page. Plus the action scenes were so elaborate I had to bust out action figures and a fake city to choreograph them, not to mention creating an entire city with a working infrastructure. I did massive world building, something I’d never done before. Whoever said writing isn’t real work is a mo-ron.

If you had to choose to be one of your characters in your book/books which would you be, and why?
None. My poor characters go through the ringer. They get shot, stabbed, beaten, kidnapped, basically everything horrible that can happen does to them. I am a cruel and malicious creator.

Do you read all the reviews of your book/books?
I was kind of a fraidy-cat, scaredy before. I avoided reading them because these are my babies. I put a lot into them. But one night I got bored and decided to grow a pair and I read all the ones on Amazon. Not to gloat (okay, I so do) I don’t have a single one star review for any of my books, knock wood. You like me! You really like me!

What was the toughest/best review you have ever had?
With Justice someone wrote that I made them cry multiple times. Doesn’t get much better than that.

Would you ever ask a reviewer to change their review if it was not all positive about your book/books?
God no. If you ask for a review, you know there’s a chance they may not enjoy it. All art is subjective, and no person reads the same book. We all get something unique out of it. It’s their opinion, and I’m confident enough in my abilities like character building and pacing those issues won’t come up too often. You can just hope the good will outweigh the negative.

Do you basic plot/plan for your book, before you actually begin writing it out? Or do you let the writing flow and see where it takes the story?
Insomnia is my bane and my salvation. It’s always taken me hours to fall asleep so instead of staring at the back of my eyelids and slowly going mad, I began making up stories in my head during that time. I work out the main characters, the storyline, really the foundation for all my books. (I really hope I never get amnesia.) When it comes time to sit down and write I do just that: I sit down and write. I have the basic outline, the characters, and the main plot points are already established but it does morph as I continue on. I so don’t recommend my process though.

What do you think makes a book a really good/bestseller ?
The two are not even close to mutually exclusive. I wish I had the answer for the Best-Seller answer so I could join their ranks and buy that yacht I have my eye on. If I’m honest, I think most of the books on the bestseller list aren’t that great, with one or two exceptions. Same characters, same plot lines recycled over and over again. Boresville. What makes a “good” book is compelling, fully actualized characters, realistic and interesting dialogue, a complex plot, and if you’re really ambitious the book will say something about the human condition and the world at large. Harry Potter did that, Twilight not so much.

Are there any hidden messages or morals contained in your books?
When I set out to write Justice, I just wanted to write a popcorn book with a kick-ass heroine and lots of sweet, sweet action. I succeeded in both but somehow I transcended that. (My subconscious is an awesome mother f**ker.) You should never beat people over the head with morals but having something there under the surface separates the wheat from the chaff. With Justice it became about how apathetic we are as a society when it comes to the suffering of others. There was a case in the 1950s where a woman was murdered and an entire apartment building heard her screams yet did nothing, they didn’t even call the police. I am a firm believer that if you are in a position to help another person, you should. If you think something is wrong, speak up. That came out in the book.

Do you think ebooks will ever totally replace printed books?
Totally? No. Will ebooks become the norm? Yes. It’s iPod vs. Cds. They’re cheaper, you can have more of them stored in one spot, and there is more variety in stories. I still prefer physical books to my Kindle but that’s mostly because I get most books from the library (I’m cheap). We’re in the middle of a revolution, in ten years who knows what the publishing landscape will look like.

Did you read a lot at school and write lots of stories or is being a writer something newer in your life?
I read all the freaking time. I was reading before Kindergarten. And when I wasn’t reading I was playing with my Barbies, creating stories with them. When I got too old for that I started writing, first novellas, then screenplays and finally books. I’m addicted.

Is there a book you know you will never read? Or one you tried to read but just couldn't finish?
Twilight. My mom and best friend loved it so I gave it a shot. I got about 100 pages in and threw it across the room in boredom. The dialogue even made me cringe a few times. No matter how you look at it or how cute he is, if a dude crawls into your bedroom uninvited and watches you sleep, it creepy as hell and technically illegal. Aim higher, ladies.

Is there anything in your book/books you would change now if you could and what would it be?
I did worry that Harry, from Justice, was just too good. He’s the perfect one in the book, far too good for Joanna. That plays out in the next book but still, I try not to make people too perfect because it’s not true to life. I’d give him more shades of grey.

What can we expect from you in the future?
This year is freaking nuts. In March I released the first in my Midnight Magic Mystery Series, What’s A Witch To Do?, then in May I self-published Justice which was a huge undertaking as I had to do everything from getting an ISBN to covers and formatting. Next, in early August, the third F.R.E.A.K.S. Squad book Death Takes A Holiday is published, and I’m working on getting the second Galilee Falls book Galilee Rising out by the end of the year. Four books, one year. I’m exhausted.