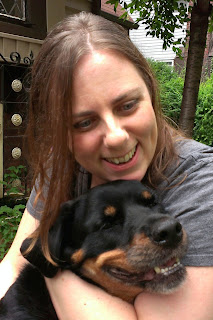 What is your name, where were you born and where do you live now?
I am Karen Greco. I was born and raised in Rhode Island. I now live in New Jersey, right across the George Washington Bridge from NYC.

Did you always want to be a writer? If not what did you want to be?
This is a tough question. Yes, and no. I can't remember a time when I didn't write. I wrote stories, poems, plays, even some "op ed" pieces when I was a kid, but never considered writing as a career. I wanted to be a lawyer, a journalist, a rock star, and an actress. It wasn't until college that I considered writing as a career path.

When did you first consider yourself as a "writer"?
I was very active in theater starting at about 12 or 13. So by college, where I was a theater major, I was writing plays. But I don't know if I ever really considered myself a writer. I write, but I am not a "writer." I need to work on my confidence!

Do you work another job as well as your writing work?
Yes, I have a "day job" doing publicity for entertainment clients. So I am usually writing late at night.

What is the name of your latest book, and if you had to summarize it in less than 20 words what would you say?
The book is Hell's Belle. It's about a kickass vampire hunter heroine.

Who is your publisher? or do you self publish?
I self-published. I gave up on writing for a long long time, and I am just too old to play the agent/publisher game. Since I've spent my entire professional life in entertainment, I know that the whole thing -- finding an agent, getting a publisher to back your work -- is super arbitrary. There are tons of talented people out there that just can't get past the gatekeepers for reasons that have nothing to do with their talent. I invested a lot of time and care into writing this book. I want it to find an audience, not sit on my hard drive.

How long does it usually take you to write a book, from the original idea to finishing writing it?
The Hell's Belle process took me about a year and a half. It started as a completely different idea, and then grew from there. But the writing itself was probably 8 months or so, then the rest of the time is editing, proofing, etc. If I didn't have a day-job, I'd probably be quicker about it!

What can we expect from you in the future?  ie More books of the same genre? Books of a different genre?
Hell's Belle has a much longer, more involved story than this one novel, so it's definitely a series. Nina, Frankie and Max have a lot to work out, and they have not heard the last of Ami Bertrand. I am working on book two now. I also have two other novels in the gestation period. Both urban fantasy but one is YA.

What genre would you place your books into? What made you decide to write that genre of book?
My genre is urban fantasy. There's a little romance thrown in, but it's secondary to the story. I love the supernatural and am a huge horror fan, particularly Vincent Price and supernatural horror films (think The Omen, The Exorcist and Amityville Horror). When I was a kid, I was obsessed with Dracula, ghosts, and exorcisms. I have always wanted to live in a haunted house. Since I was raised Catholic, I was a huge hit at church, as you can imagine.

Do you have a favourite character from your books? and why are they your favourite?
Picking a favorite character is tough. I enjoy them all, even the "bad" ones. But I feel a certain attachment to Dog, who is a Hell Hound. I never fail to smile when I am writing about her.

How long have you been writing?, and who or what inspired you to write?
I have been writing since I was a kid. I started out writing short stories and really bad poetry, and eventually turned into plays. Then I had to get a job, and writing was a huge part of my career, but I stopped writing creatively for a long time. I finally picked it up again. I am not sure if anyone inspired me to write. My mom certainly encouraged me to be creative, whether it was writing, painting, sculpting. The arts and literature were very important to her, and she made sure that I had plenty of access to the arts growing up.

Where do you get your book plot ideas from? What/Who is your inspiration?
I think locations inspire me. I think about the locations that I want my characters to go and interact. This book is set in Providence, Rhode Island, which is where I grew up. So I think about certain landmarks and then think about what could happen there.

For example, the Coast Guard House is a phenomenal restaurant on the water in Southern Rhode Island. It's literally on the ocean, jutting out from some rocks on the shoreline. The part of the restaurant that overlooks the ocean is all plate glass and on stormy nights, when the ocean is churning, the waves come up and pound the glass. It's powerful and frightening and awe-inspiring. So the Coast Guard House during a storm became the location of a key chapter in the book. Ironically, Hurricane Sandy did extensive damage to the Coast Guard House, not unlike what I wrote (and the novel was already with my editor at that point).

Do you have a certain routine you have for writing? ie You listen to music, sit in a certain chair?
I wish I had a routine for writing! My day job can be pretty demanding, and it's been tough to fit in the writing, especially the past few months. So I have learned to kind of writer where ever and whenever I can get it in. At this point, I don't go anywhere without lugging my laptop along, in case I have some down time and can get a few hundred words in!

Have you ever based characters on people you know or based events on things that have happened to you?
Some characters are composites of various people that I know. Of course, the behavior is very heightened. For example, my grandmother loved to do housework, to clean. It's what she lived for. So, in the second book, there is a character who loves to clean who is inspired by my grandmother. But she's also a chain-smoking, bad-ass type of granny, which was definitely not my grandmother.

Since my background is in performance, I tend to write my characters with certain actors in mind. So as I write, I picture the scenes in my head. It unspools like a movie.

How do you come up with the Title and Cover Designs for your book/books?Who designed the Cover of your books?
I work with Jeff Brennan, an amazing artist who has done story boarding on films and was an inker DC Comics, among other places. We got together, I showed him some location pics of Providence, talked about character, etc and he came up with preliminary sketches, and then we finally worked all the way to the final picture. It was very collaborative, and a great way to work. Now I want to turn Hell's Belle in to a graphic novel at some point.

Do you have anybody read your books and give you reviews before you officially release them?ie. Your partner, children, friends, reviewers you know?
I had a great team of people working with me on this. My writing partner, Jaene, suffered the down and dirty first drafts, and we talked through character and plot points together. Working with her was amazing because it forced me to get out of that bubble that writers can sometimes exist.

Then I had a few very close friends and family read it when it was about half way through. I wanted more feedback at that point, to make sure that I was making the right decisions for the characters and the story. Through it all, I was revising based on the feedback and also moving forward. Finally, I had it done and sent it off to my incredible editor. She took over and really helped me turn the story into something worth reading.

I went back and rewrote based on her feedback, and then handed it back to a group of friends and family. I needed them to comment on the story, but I also needed to make sure plot holes were plugged and continuity was there, and I was just too close to the story to pick that out myself. I also asked them to start copy-editing!

Once their feedback was in and the edits were complete, off it went again! This time to a professional copyeditor who did a final cleanup. My husband did the absolutely totally final clean up, since his ability to find errors is kind of mind blowing.

Do you have a treasured book from your childhood? If yes, what is it?
Hop on Pop by Dr. Seuss was my favorite book when I was a kid. I still laugh when I read it.

Do you have a favourite genre of book?
I love the urban fantasy and horror genres. I would love to write a pure horror novel at some point, if I can figure out the right story to tell.

What do you think makes a book a really good/bestseller ?
Ohhhhhh boy. Given my day job, I have opinions on this topic. Truthfully, there is just no way to know if something is going to resonate with enough people that it will turn into a best seller. Could anyone have predicted that erotica would turn into a mainstream thing, and that what started out as Twilight fan-fic would be the book to lead us there? It's really hard to figure out where this bestseller success comes from--some things just tap into the zeitgeist and take off. If I knew how to crack that code, I would be a very wealthy woman!

Is there a book you know you will never read? Or one you tried to read but just couldn't finish?
I don't think I will ever read War and Peace. There, I said it. Life's too short.

Your Facebook Page? (I am most active on here!)
https://www.facebook.com/hellsbellebykarengreco

Your Twitter Details?
https://twitter.com/karenThegreco
Posted by Jeanz xx at 10:30