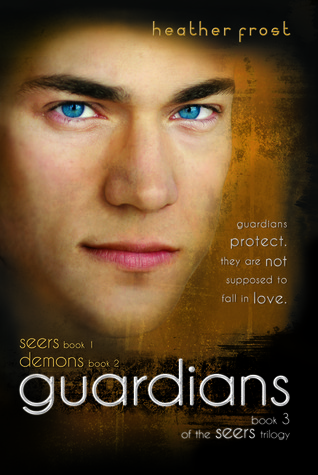 BLURB from Goodreads
A vision of Kate's death causes Patrick to intensify his duties as Guardian. The Demon Lord is especially relentless now that Kate is the only Seer to ever escape his grasp. Then Patrick discovers that Kate is the key to defeating their greatest enemy.

MY REVIEW
I was lucky enough to receive access to this book from Netgalley. The cover fits in well with the rest of the series. The male on the cover could be Patrick or Sean as they both have those piercing blue eyes, that draw your attention. The font of the authors name and title fit well with this cover and the rest of the series covers too. The covers had seemed to get darker as more books had been released but I think this third one is slightly lighter than the last one and that could be said for the plot. In that things should end up lighter. I'm also fine with the placement and font style of the series name on the cover. I don't like the way the books are all listed on the cover. I do however love the byline on the book which says, "guardians protect, they are not supposed to fall in love" it fits the book and kind of sums it up really well. Would I pick this book up in a book store on the strength of the cover? I reckon I would do yes, though its difficult to say as after reading bk1 & bk2 I couldn't wait for book 3. Then again I was a little sad and didn't read it immediately upon receiving it as I wanted to make the story last longer. I read this book as slowly as I could as I truly wanted to relish it, with it being the conclusion of the series.
So at the end of bk#2 Kate grandfather was killed by Sean/Far Darrig. Since then Kate is plagued by horrendous nightmares where she has to decide whether to kill Sean/far Darrig. As Sean is Patricks brother she feels she can't even discuss it with him. There's lots of twists and turns and secrets and perhaps white lies in this book You get your mind set things are going to turn out one way only for things to twist and turn into a different direction again.
So as in the other books Kate is in danger . . . and so is everyone she holds near and dear to her heart. The Demon Lord has quite literally put a "price on her head" and is playing the "long game" trying to get his minions to do the dirty work for him.
Extra Guardians have been called in as well as some extra Special Seers for a mission the Guardians have come up with to get rid of the Demon Lord once and for all. Kate is supposed to train the other Seers for the mission but things go horribly wrong....Then just when you think there is no hope at all. Sean has an attack of conscience. What will happen? Will Kate live? Will Kate and Patrick have a long future together or is fate set to intervene? People, Guardians and Demons die, who lives and who dies?
So there's plenty of Demon fighting, family traditions being played out as well as the continuing relationship between Kate and the smoldering hot Patrick. Though I think both O'Donnell boys/men sound gorgeous! Both Patrick and Sean make it to the "book boyfriend" lists! Then of course there's the cheeky chappy Toni for the list too!
I think the book is so well written, the descriptions are vivid and so accurate you feel like you are there in the middle of all the action. I think Kate's bedroom is described so well that scenes taking place there, well you can imagine them as a movie playing in your head. I love Heather's style of writing, the pace of the book is . .well..perfect.
I really seriously enjoyed this last book in the trilogy. . . I have absolutely L. O. V. E. D. loved this series of books. Seer's was one of the very first books I read and reviewed for my blog. I want to say a Special thank you to Heather Frost for believing in me as a newbie blogger and allowing me to read and review Seer's. Heather then always went on to make sure I got an e-copy of the  other books in Series as soon as they were available. I'm just sad I didn't live near a big enough city for Heather to visit whilst in the UK. I hope she had a great time. So enough of me "gushing" back to the book, this last book in the trilogy had some expected happenings (which I cannot tell you about it'd spoil your own reading of the book) but lots of twists and turns too. Heather Frost really plays with your emotions as she draws this trilogy to a close. I went from sitting on the edge of my seat, to chewing my lip, to holding my breath, to sighing and yes a little crying of tears too in this conclusion to a fantastic series. I even had a little chuckle at one of the new new Demon characters being called Sandra!
Could there be more? Well we've learnt loads about Seer's now how about a spin off series called Guardian's, I think it would work and could pick up where this book lets off!

So did I enjoy the book? Loved it! Loved it soooo much! Would I recommend the book? I already have to my daughter, I think she is sick of me raving about one of my favourite series coming to an end. Would I read a spin-off series? Oooo, yes please I want to know how things work out for certain characters who have taken on new challenges. The Spin-Off Series could be called "Guardians" and follow some newly recruited guardians as well as our favourite characters form Seers. Would I read other books by Heather Frost? Definitely, please, please keep in touch Heather!