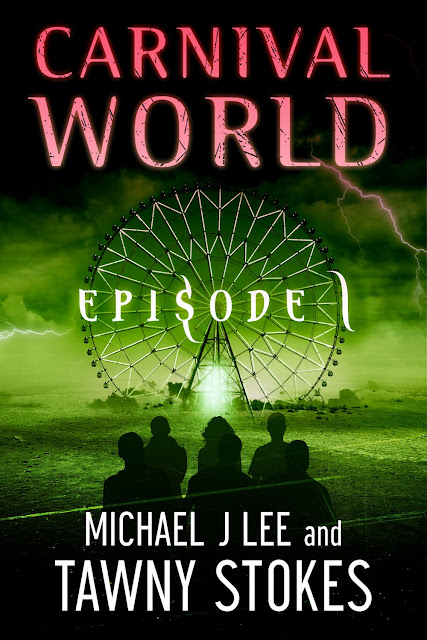 For six teens and one young boy, an innocent ride at a summer carnival becomes a harrowing trip into another dimension where everything they've ever known has been destroyed and everyone they’ve ever loved are gone.  Now they have to travel a road through a harsh and unreal world where mutated creatures hunt them and a mysterious man with an ugly scar dogs their every move.  Guided by the Barker in their dreams, they each must face their past enabling them to perform a task in the present that will help them find a way home.  Every game played is a piece closer to solving the puzzle.

For Darien, the Strong Man, Nicole, the Tightrope Walker, Maddie and Justin, the Conjoined Twins, Summer, the Escape Artist, and little Sam, the Fortune Teller, dreams are lost, nightmares are real and Carnival World is the place they need to survive if they want to make it back home.
Thank you for your time and consideration.

Please be aware this is Episode 1 about 16K words, 40 pages with 10 episodes planned. If you'd care to review this title please let me know as we will have a limited number of review copies available.

Michael's Bio
Born in Detroit, lived on the East Coast, the West Coast and the Midwest. Michael's been a script reader and judge and now is a script consultant and entertainment blogger.

Tawny’s Bio
Tawny Stokes has always been a writer. From an early age, she’d spin tales of serial killers in love, vampires taking over the world, and sometimes about fluffy bunnies turned bunnicidal maniacs. An honour student in high school, with a penchant for math and English, you’d never know it by the foot high blue Mohawk and Doc Martens, which often got her into trouble. No longer a Mohawk wearer, Tawny still enjoys old school punk rock, trance, zombie movies, teen horror films, and fluffy bunnies. She lives in Canada with her fantastical daughter, two cats, and spends most of her time creating new stories for teens.
Tawny also writes adult paranormal/urban fantasy fiction under the name Vivi Anna, and is an aspiring screenwriter.
Posted by Jeanz xx at 03:00