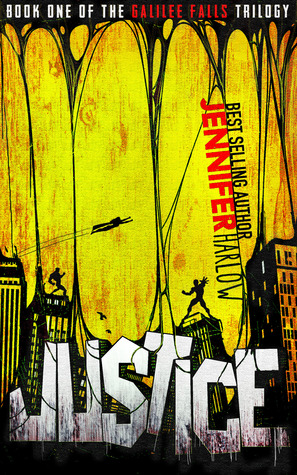 Justice
Book One of The Galilee Falls Trilogy
Jennifer Harlow

Publisher: Devil on the Left Books

BLURB supplied by Bewitching Blog Tours
It’s hard being a regular police officer in Galilee Falls, a city with the highest concentration of superheroes and villains in the country. It’s even harder watching your best friend, the man you’re secretly in love with your whole life, planning to marry another woman. Detective Joanna Fallon has to contend with both. When the vilest supervillain in the city’s history, Alkaline, the former crime boss who can shoot acid from his wrists, escapes from the maximum security prison, the whole city is gripped by panic.

Leading the pursuit is Captain Harry O’Hara, Joanna’s boss and secret lover, and the city’s champion superhero Justice, who caught the villain last time, much to Joanna’s chagrin. Before her father was murdered in a mugging twenty years earlier, Joanna worshiped the hero, but when he disappeared and failed to save her father, that adoration turned to contempt for all supers.

After Alkaline attacks too close to home and targets Joanna as his next victim, tough-as-nail Joanna has to contend with her increasing fear while struggling to choose between her life-long crush and her new-found love.

At turns vulnerable and fierce, equally mordant and winsome, Joanna is an earnest yet emotionally damaged heroine, who despite the tough breaks of her childhood sees the good in people and vow to protect her beloved city at all costs. An ass-kicking petite firecracker with no superpowers of her own, she charges after supervillains unflinchingly, never losing her wit even when facing her toughest fight. With a coy blend of whimsy and vivid imagination, she delivers both humor and thrills in an action-packed and edgy blend of comic book cool, fantasy-noir, and bitter-sweet romance.