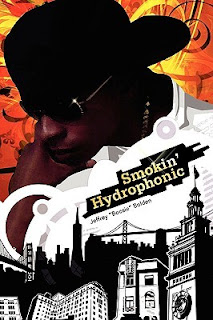 What is your name, where were you born and where do you live now?
My name is Jeffrey Bolden, born in San Diego, CA, currently residing in Gulfport, MS.

Did you always want to be a writer? If not what did you want to be?
No, if I’m completely honest with myself, I, like a lot of people was lost when it came to the future. I mean even for a normal teenager, the future seems, I don’t know, far I guess. You feel like you can do anything. There was a time I wanted to be the first black president, like ten years before Obama. Before that, I wanted to be an engineer. No matter what I did, I always knew that I wanted to be great at something. A legend. So when I wanted to be a rapper (still kind of do, not going to lie) I knew I wanted to be the best at it, and I knew I was the best at it. Still am. But I knew it took money to rap, and I thought I could write and publish a book or two to get start up money. Bad News, Good News was the first line of cocaine that led to the addiction of poetry and prose.

When did you first consider yourself as a "writer"?
I first knew I was a writer, a real writer not when I when I first held my book in my hand, it was when I realized I couldn’t go a whole day without writing without getting withdrawals. It’s like the first step to recovery is admitting you’re an addict, that was the day I had to admit I was a writer.

Did it take a long time to get your first book published?
Not really, after I put it together, maybe a month later I put it out there.

What is the name of your latest book, and if you had to summarise it in less than 20 words what would you say?
I can summarize Book Of Soul in one word. Honesty.

How long does it usually take you to write a book, from the original idea to finishing writing it?
Depends really but I’ve been finding as of late, I can write a book in a quarter of a  year, matter of fact I should say a novella size book, and that’s me working on two or three different projects at the same time so probably three to four months of constant and I pretty much have it done.

Which of your books were easier/harder to write than the others?
The Children of the Night series which hasn’t been picked up yet was a daunting task to write, taking almost a year each, save Brand New Eyes or the finale. But those books were my Atlas Shrugged in a sense. They were meant to say a lot more than what was on the page, where as all of my other books were pretty much straight forward. Like Echoes of Silence is clearly a book on the wavelength of Brokeback Mountain meets Let Me In. Simple. A girl falls in love with a girl but also in love with a demon. It’s also about how people focus so much on labels, and really in respect to the main character, I never mention once that she’s gay because she’s not. But that was a simple message. The Children of the Night series does not contain simple messages i.e the hardest books for me to write.

What can we expect from you in the future?  ie More books of the same genre? Books of a different genre?
I can’t tell you what to expect, I don’t even know. That’s the fun in writing really.

Do you have plans for a new book? Is this book part of a series?
I’ve decided to just write until the books I’ve already written find publishing homes or start on their own journey. It’s like how a parent may feel once the child is old enough to gain a certain independence going to their first day of school, and they may want another child. That’s how I feel. Right now, I’m still breast-feeding and changing diapers, but one of my books is learning how to walk, I can feel it.
Posted by Jeanz xx at 10:00