EXCERPT - THE CHILDREN AND THE BLOOD BY MEGAN JOEL PETERSON 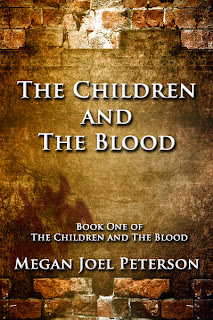 Blood dripped from his hands to stain the carpet, handcuffs clinked on his wrists as the car swerved, and Howard Bartlow knew he was going to die.
Other than that, nothing was certain.
“You’ll let them go, right?” he asked again, hating how tentative his voice sounded in the darkness. “They’ll be safe after this?”
“We’ve given you our word, Mr. Bartlow,” said the suit-clad giant next to him, his voice calm as he flipped through the contents of Howard’s wallet. Though his weight shifted slightly as the car whipped around another turn on the gravel road, the man’s eyes didn’t leave the wrinkled family photograph he pulled from between the credit cards. “Our goal is simply to end this. We have no interest in murder.”
Howard looked away, unable to stand the sight of the man holding the picture of his wife and child. And as for the rest, that wasn’t really true, was it? The monsters around him might not consider what they were about to do as murder, but Howard knew otherwise.
So many would be killed. If they were lucky, a few in hiding might survive. But everything he and the others had worked and bled and died for these past eight years would mean absolutely nothing. Rage swelled at the thought, building till he was sure it would explode from his body and swallow everyone in the car in flame.
And then it drained, just as it had every other time in these past six hours of hell. The monsters had Missy. They had his beloved Tanya. They had the only reasons Howard had suffered through these eight horrific years, and they would kill them both if he didn’t do exactly as they said. Everything was pointless without his wife and little girl. The hiding. The running. The living in buildings abandoned so long ago that even the rats had gone to find other places to stay. He’d left his home. He’d left his career. This whole mess was the fault of those now holding his wife and daughter captive, and with his help, they were going to destroy everything.
But Missy and Tanya wouldn’t die.