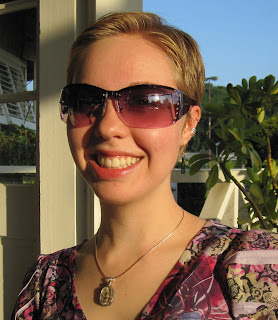 My name is L.M. Sherwin and I was born in the southeastern United States. I grew up in a small north Georgia town and moved about forty-five minutes away when I went to college. My husband and I liked our college town so much that we decided to move there permanently!

How long have you been writing?, and who or what inspired you to write?
I’ve been writing since before I could even hold a pencil! I used to make up all these stories and have my mother write them down for me. Once I could write on my own (at about 4 years old, I’m told), I started writing elaborate short stories. My mother and father still have most of the amusing ones. When I was young, I think I was inspired to write because I loved the stories my mom and dad read to me. I learned to read very early and I devoured books. All the stories I read made me want to write my own stories. As I grew older, specific authors inspired me to become a better writer.

Is there a certain Author that influenced you in writing?
I really have two that inspire me the most—so hard to nail down one! I read Tolkien’s     Lord of the Rings Trilogy for the first time in middle school//high school and fell in love.      The scope and depth of his world enchanted me. As well, I was such a language nut that         I started making languages and ciphers for my stories like Tolkien did. I also drew maps. I      was pretty obsessed with Tolkien, now that I think back on it... A modern author I have             always been inspired by is Juliet Marillier. Her writing is PHENOMENAL. Seriously, if you             haven’t read any of her books, go out to a store RIGHT now and buy (not check out from the library, but BUY) Daughter of the Forest. You’ll never regret it, I promise.

What can we expect from you in the future?  ie More books of the same genre? Books of a different genre?
I write within a universe I’ve created called “the Primoris System”. It operates on the      idea that most humans from Ancient Earth colonized other planets in a new solar   system. The Primoris System has ten habitable planets out of the twelve that revolve around its three suns. Night Bells takes place on the ninth planet from the suns, Niflheim. The next two novels I have plans to publish also take place on this planet and follow the same family. In the future, I plan to begin series for each of the colonized planets in the Primoris System. I have a huge universe to play and write in! Most, if not all, of my planned future works will take place in this framework.

What genre would you place your books into?
My books definitely fall within the Fantasy genre, with a bit of Science-Fiction thrown in.

What made you decide to write that genre of book?
Growing up I always loved reading fantasy books the most. Science-Fiction books came   in at a close second, though. I will, occasionally, delve into other genres, but for the most part, I stick with reading what I love. Because I love the sorts of stories in this genre, it was natural for me to write in my own fantastical settings and frameworks.

Do you have a certain routine you have for writing? ie You listen to music, sit in a certain chair?
I actually do have a routine! I have a giant, fluffy, blue house robe that I wear while writing. I tend to write in the morning and I listen to movie soundtracks, Enya, or other sorts of mellow, low-tone vocal music while. As well, I’m typically in my pajamas while writing. I believe in intense comfort when I’m trying to create. Each morning, I make that happen.
Do you choose a title first, or write the book then choose the title?
It depends on the book, really. Most of the time, I have a story idea and I’ll write a page or two and then I’ll try and hammer down a title. Usually, my titles play into the story, so I need them early on.

Are character names and place names decided after their creation? Or do you pick a character/place name and then invent them?
Again, it depends. For most characters and places, though, I create them and immediately attach a name. I never leave them “empty” as I write. If I have a new character idea, I immediately start researching names. It’s the same for places.

Do you basic plot/plan for your book, before you actually begin writing it out? Or do you let the writing flow and see where it takes the story?
Typically, I have an initial spark of an idea and I run with it. Every now and then, I’ll stop to take stock of what I’ve written and try to get a semi-clear path for the rest of the story, but usually, I just sit and write and see where the story goes on its own. It’s a very fun way to write and I believe it has worked well for me so far.

What do you do to unwind and relax? Do you have a hobby?
I love to read. A lot. To give you perspective, in July of this year I read 11 books—some novels, some novellas. Whenever I can, I try to make time for reading. When I’m not reading, but still want to relax, I love to play video games on my PC or older consoles like the Nintendo 64. I’m extremely partial to The Legend of Zelda: Ocarina of Time, Skyrim, Lord of the Rings Online, and Star Wars: The Old Republic. If I’m not reading or playing video games, I attend martial arts classes two nights a week. I do both Taekwondo and Hapkido. My husband and I also like to watch fun shows and movies together. We sometimes read webcomics while snuggling. :-) I’m a nerd at heart.

What is your favourite book and Why?  Have you read it more than once?
My favorite book of all time is Daughter of the Forest by Juliet Marillier. I’ve read it so    many times I’ve lost count. I love this book because it is a story of commitment, devotion, and courage. It follows the tale of a young girl who blossoms into womanhood during a period of intense pain and loneliness in her life. The gorgeous setting and historical time period make it so beautiful and rich that it is absolutely unforgettable. As well, it was based off of an Irish fairy tale, so it has a mythological quality to it that is fascinating.

What piece of advice would you give to a new writer?
WRITE. No seriously. You have to write if you want to be a writer. So many people tell me that they love to write, but they never spend any time doing it! When I started getting serious about becoming an author, my husband challenged me to write an hour EVERY day. So, I did. You know what happened? In a year, I wrote four manuscripts—three novels and one novella. You can accomplish UNTOLD goals if you commit to them. If you’re serious about writing, set aside a certain amount of time every day and spend it WRITING. It will change your life.

Your blog details? http://lmsherwin.com
Your web site ? same as above
Your facebook page? http://www.facebook.com/L.M.SherwinBooks
Your Goodreads author page? http://www.goodreads.com/author/show/6505775.L_M_Sherwin
Your Twitter details? LM_Sherwin

And any other information you wish to supply?
Thank you so much, Jeanz, for having me on your blog today! I very much appreciate the opportunity! To any future readers, thank you so much for reading my book! I hope you enjoy reading it as much as I enjoyed writing it!
(Thankyou for taking the time to do this Interview)