ABOUT THE AUTHOR - SHEILA MARY TAYLOR 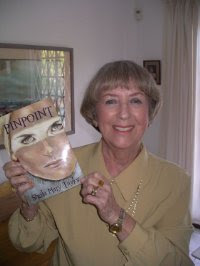 
Sheila Mary Taylor was born in Cape Town beneath the towering slopes of Table Mountain. Her Scottish parents, both serious academics and writers, despaired of her, as the things that turned her on as a youngster seemed far removed from their serious world of academia.

And no wonder. Cape Town was a distracting paradise to grow up in: mountain climbing, surfing in the glistening waters of the Indian Ocean, roller-skating, riding, hunting – and parties galore. She did it all, although the thing she loved most was dancing, and until she was twenty-three when she met Colin, her husband-to-be, on a visit to the UK, she wanted to make ballet her career. But having been surrounded by wall-to-wall books from an early age, and listening to music almost non-stop as her father played his hi-fi classical records so loud it was like having an orchestra in the house, was bound to have a belated influence on her. Yet it was only much later that these two strong influences – combined with the clock-ticking heartbreak of her youngest son Andrew being diagnosed with teenage cancer – would change her life and kick-start her writing career.

Her plethora of unusual activities:  jockey in amateur ladies’ races, exhibition roller skating in night-clubs, a spell of acting and directing, secretary to a diplomat, creator and editor of a dramatic society magazine, dancing in the Royal Albert Hall, and above all, living in exciting exotic places around the world with Colin, her mining engineer husband of almost sixty incredible years – have all enriched and inspired her writing.