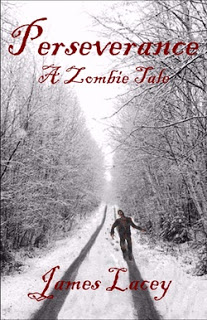 BLURB from Amazon.co.uk
I am a teacher. At least, I was before it all happened, before I was forced to survive. I taught social studies at the high school. I was also the coach of the school's successful debate team. It was a cold Saturday in January when I heard the first rumor of trouble... You know, pop culture had defined the zombie apocalypse time and time again, all coming from the minds of horror writers, film producers, and video game designers. Who knew that when it really happened, it wouldn't be anything like they all predicted. Oh sure, the dead reanimated, and they were certainly hungry for living flesh... but what were the mysterious red-eyes, zombies that moved faster than their stumbling counterparts and seemed to not only communicate, but to exert some kind of control over the others. More than that, though, strange things were beginning to happen to me. My body was changing, and I hadn't been infected - at least, one of those creatures hadn't bitten or scratched me. A high school social studies teacher might be the least likely survivor of the end of the world, but it was becoming increasingly apparent that if I was going to save my girlfriend and myself, I was going to have a fight on my hands. It seemed that at the end of civilization, the living could be just as dangerous as the dead...

MY REVIEW
I was given an e-copy of this book by Bewitching Blog Tours in exchange for my honest review to appear as part of the blog tour.
The cover of this book is quite stark, with harsh looking conditions. This represents the harshness of what happens in the "apocalypse". I think the area pictured is near the cabin where the main character and Ashley end up stumbling upon and make it their first "safe-house"
The odd thing which I didn't really realize until I got down to doing the review was the fact that the main character's name is never mentioned within the book!
Having said that he is a brilliant character, before the "apocalypse" he was simply a teacher and coach, as the "apocalypse" unfolds he becomes a savior  and ends up being a reluctant, the becomes resigned to being a leader.
The first thing the main character has to do is get to his girlfriend and rescue her. It's not an easy task, as the world or at least their part of it is over run by zombies. Zombies that resemble those depicted in films, gory, smelly disgusting human-eating zombies.
So yes the book is kind of gory and disgustingly descriptive of the decay that is happening.
Once Ashley is rescued they embark on a journey.....a journey where? To anywhere they can keep locked up and safe.
They end up having to make some tough decisions and not wavering from their planned path and in the process leaving people begging for help to fend for themselves.
Eventually they end up speaking to a group that are holed up in a cabin and are allowed to join them.
I really don't want to say any more about the plot of the book as I think it is best read for yourselves. The book is packed with lots more "adventures" and escapades with zombies and other threats. you read about people making friendships, sticking together and forming little groups to live in. The main characters attitude is initially just to protect his girlfriend Ashley and no one else matters, but you see this this way of their survival slowly changing as they become attached to more people along their journey.
So there's the story of their survival, the whole what caused the zombies, how can the zombies be defeated, why do some turn and some not, why do some turn superhuman etc
There is plenty going on in the book, it really keeps your interest. I basically read it in two sittings.
So did I enjoy the book? Though a bit gory for me I did still enjoy it. Would I recommend the book? Yes, those who like horror would probably like this book too. Would I read more by James Lacey? I would definitely look over any more books by him. Would I read a Bk #2 in this series if there is one? Yes, would like to know if and how they escape Larshall, and of course what happens to all the remaining characters.